I was eight years old when the Masters of the Universe movie was released. I was convinced that this was going to be the greatest movie ever made! In those pre-internet days, information on upcoming movies was tough to come by, especially for a little kid, so aside from a small feature in one of the few issues of the official MOTU magazine I'd read, I had seen virtually nothing of the movie when my Dad took me to the theater to see it soon after it opened. (That's a story in itself. Dad refused to bother with calling the theater to get showtimes, and just left at a random time. We had to drive to all three theaters in town before we got to the right one, and then had to kill about an hour before the next showing!) My thoughts and feelings about the movie are too much to get into here, and my stance on it has softened quite a bit over the years, but let's just say that I was disappointed. After the awesome opening, I began to realize that we just weren't going to get to see all the characters I loved, and were instead being given new characters to fill those roles. My feelings about these new characters at the time: Karg? A fur-wearing loser with a bootleg Trap Jaw arm. Blade? A poor man's Tri-Klops. But the third new villain was actually pretty cool. (So he was the one who got killed pretty early on, naturally.) That was Saurod.

(I'll take a moment here to apologize about the photo quality. I was unable to use my normal lighting setup, and I'm nowhere near a skilled enough photographer to compensate properly, so the result is that all the photos look like Saurod is about to sit down for a Barbara Walters interview. Just bear with me, and hopefully things will be back to normal next week!) 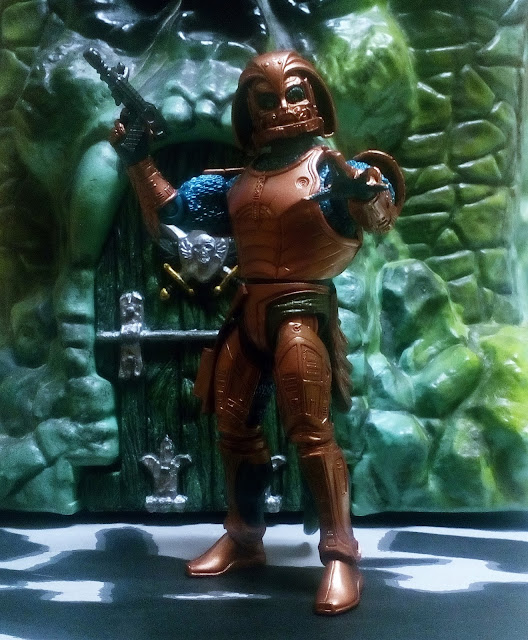 While Mattel has repeatedly insisted that movie figures are not possible in the MOTUC line-- which is a damn shame, as I would fucking love a couple of Langella Skeletor figures, in both standard and golden-armored Master of the Universe versions-- they can make new figures of the characters they produced figures for in the vintage toyline. That means we can get Blade, Gwildor, and Saurod. I wanted the Saurod toy as a child, but never saw any of the movie figures in any store. So, the arrival of this figure has been a long time coming, to me. Does he live up to the anticipation? Well, mostly. 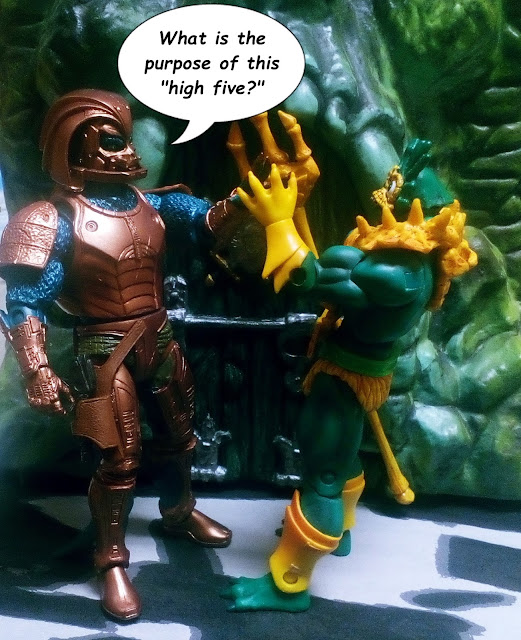 The first thing I noticed about Saurod as I removed him from the package was his size. He's taller than most figures in the MOTUC line, and that additional height also makes his proportions seem a bit leaner, which suits the character. While there are a few re-used parts, most of Saurod is new tooling. His sculpt is more detailed than usual for this line, which is appropriate, given the source is live-action material. His armor has lots of detail, including some small dings and indentations to show that it has seen some wear. The skin and chain mail are meticulously detailed, especially Saurod's eyes. They have a sinister, reptilian coldness that make the character very imposing. Saurod's left hand is sculpted with his fingers flayed out, emulating a movie scene in which he shoots darts from his fingertips. Unfortunately, this brings us to one of the two quality control issues my figure had. His index finger was badly warped in the package, so it's flush against the forefinger. I'll be applying some heat to the hand so I can reposition it. Saurod's lone accessory, his gun, suffers from a similar issue. The scope on top of it was also warped, and leans off to the side instead of facing straight ahead, as it should. Again, heating the part and repositioning it will fix this issue, but it's still annoying that these are recurring problems with these figures. That said, the gun is cool, with a very detailed sculpt. It does have a bit of trouble fitting into its holster, though. 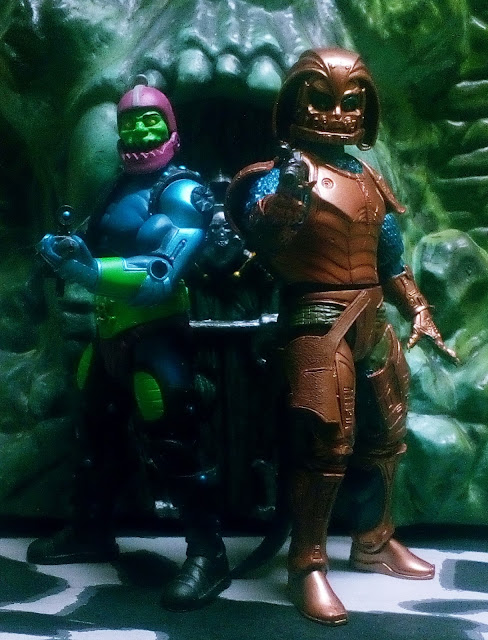 Saurod features the standard articulation for the line, though the stiff armor severely impedes the range of motion in the abdominal hinge. The ankles on mine are super tight, but that's better than them being really loose. His head has particularly good range, far better than many figures in this line. His tail, sadly, is not poseable. Paint apps are very simple, and do just enough to get the job done with no frills. The eyes are quite good, with shades of green and yellow, with a pinkish-red surrounding that looks very alien and cool. Saurod's scales and the mail he's wearing are the exact same color, which just seems odd. The textures are clearly distinct from one another, so I don't think it's all intended to be his skin. A different paint wash on each texture would have helped distinguish between the two, and a wash over the armor to bring out all the sculpted detail would have been most welcome, too. These are things that are easy for me to do myself, but it would have been nice to have the figure that way out of the package. I got this figure for $16, so I'm not too fussed about it, but for the people who paid $30+ when he was first released, I can see it being more of an issue. 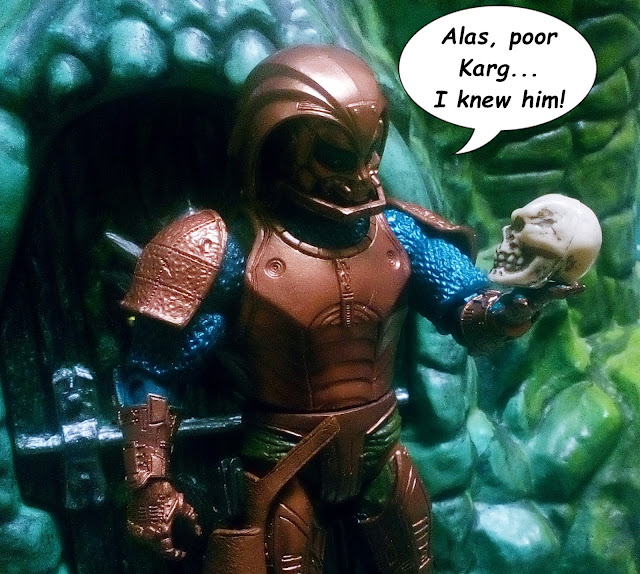 All in all, Saurod is a figure with some minor issues that do little to harm him in my eyes. He's a very cool figure with a fantastic sculpt and an imposing presence on the shelf, and he'll make a great addition to Skeletor's army. Now to get Blade and Gwildor!