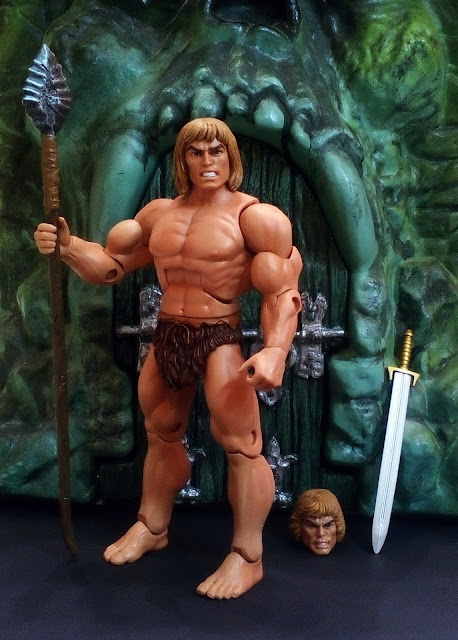 After a two week break which saw me manage to give myself a concussion, along with plenty of other events, I'm back with the newest Masters of the Universe Classics review! Today we're looking at a figure that was long desired by those of us who love the world and lore we saw in the early MOTU minicomics: Oo-Larr! Of course, to lovers of the early MOTU minicomics, this is just He-Man, but Mattel decided to present him as a separate character. I don't really care how they justified it to themselves, I'm just glad we finally have this figure! It may be difficult for some to understand exactly why so many MOTU fans got so excited about a figure that looks like He-Man just misplaced all the shit he usually carries around. That's understandable, so here's a quick crash course. 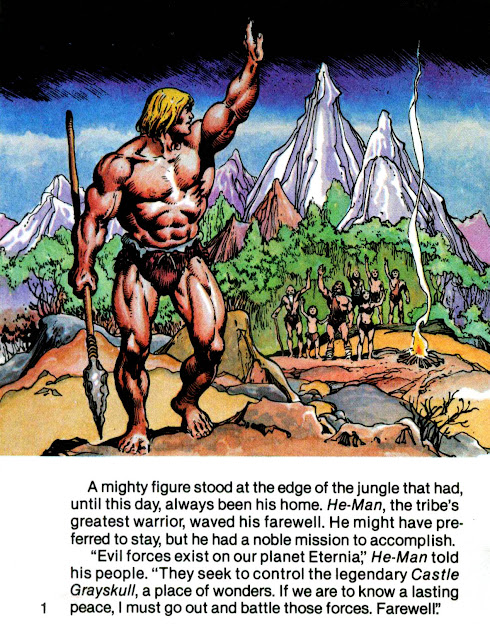 The image above is the first appearance of He-Man in any story-based media. For those of us who were interested in MOTU before Filmation began producing their animated series based on the toyline, He-Man was a barbarian who left his jungle home to defend Eternia against the evil forces who sought to impose their will upon it, Skeletor foremost among them. He rescued the Sorceress, referred to as the Goddess in some of the early comics, from a monster that seemed moments away from devouring her. The Sorceress gave He-Man armor and weapons to aid him in his struggle against the forces of evil, and the endless war between He-Man and Skeletor commenced. Even when DC introduced the Prince Adam secret identity a bit later, this was still a much darker and hard-edged world, far removed from the sanitized, toddler-friendly Filmation series. (Not that I'm knocking the show, as I enjoyed it when I was a kid. I just always liked the early comics a hell of a lot more!) 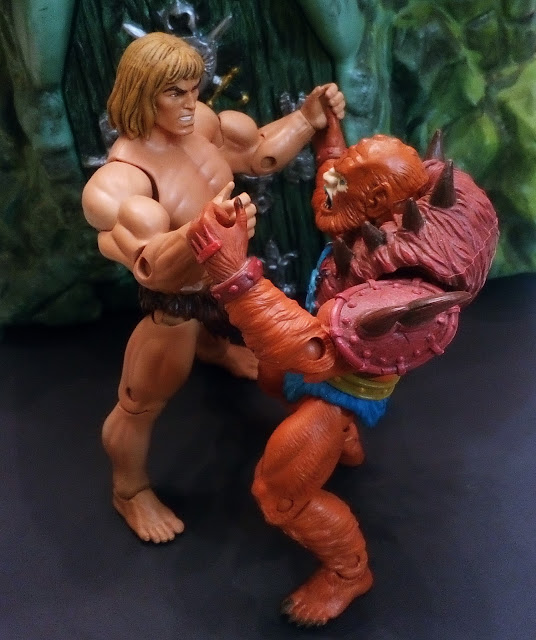 With that in mind, this is a very important version of the He-Man character to have as an action figure. Once Mattel released a head for Skeletor which was lovingly sculpted by the Four Horsemen to replicate his appearance in the Alfredo Alcala-illustrated comics, it became even more imperative that we get a He-Man to pair up with him. With the release of this figure, a longtime need for pre-Filmation MOTU fans was finally filled. Thankfully, this long-awaited figure meets expectations. The body is the same basic body we've seen many times before, of course, with a few new parts to properly capture this version of the character. The head sculpt is pure Alcala, and I'll definitely be seeking out an extra so it can be the head for my default He-Man in my MOTUC display. The facial features and longer hair perfectly capture the character's look in these early comics. Truly excellent work by the Four Horsemen here. 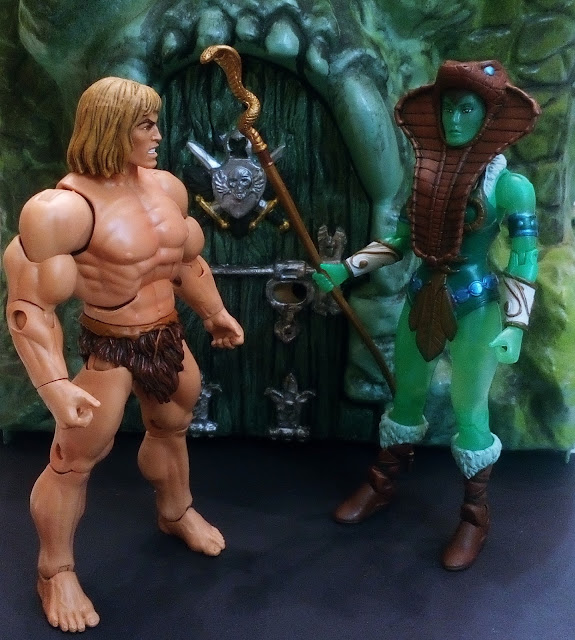 Articulation is standard for the line, with the exception of the mid-calf cut that is normally present at the top of the boots. As this version of He-Man has no boots, he lacks that point of articulation. It's also worth noting that the head's longer hair slightly interferes with its range of motion. The ankles on my figure are extraordinarily tight, and feel as if they might break when I move them for posing. Loose ankles are bad, but ankles this tight aren't good, either. Mattel seems to really struggle to find that happy medium.

He-Man shines once again when it comes to his accessories. He includes the spear seen in the original minicomic, a sword very similar to the energy blade Skeletor often uses in the early minicomics(in some panels, anyway; its design changed a bit from page to page), and a very cool alternate head sculpt for He-Man! This head sculpt more closely resembles that of the vintage He-Man figures', and looks much better than the standard MOTUC He-Man head. While I like the Alcala-style head more, this vintage toy-inspired head is what the MOTUC He-Man head sculpt should have been in the first place. It's a shame that these two excellent head sculpts are somewhat tough to get! The one big omission that I think really should have been included is a power sword in the Alcala style. While Mattel did eventually release one, it was as an accessory with a (relatively undesirable) figure whose story is set in the future, and it would have made much more sense to include it here. 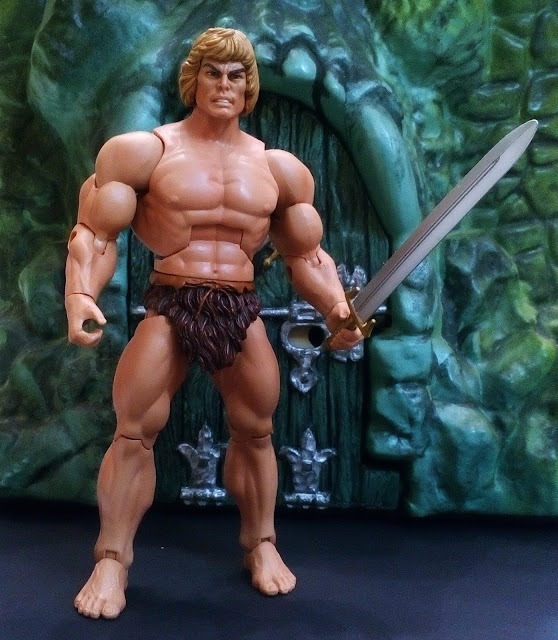 This "first appearance" He-Man figure has been a very long time coming. Thankfully, he's every bit as cool as I had hoped. The Four Horsemen outdid themselves on both head sculpts, and while the figure may look a bit plain compared to some of the others in the line, it's an extremely important figure. This is the He-Man that introduced the world to Masters of the Universe, and it's very nice to see him take his place in the toy line at long last. Now they just need to make a full-on Alcala He-Man, using this head sculpt, with the boot knife! 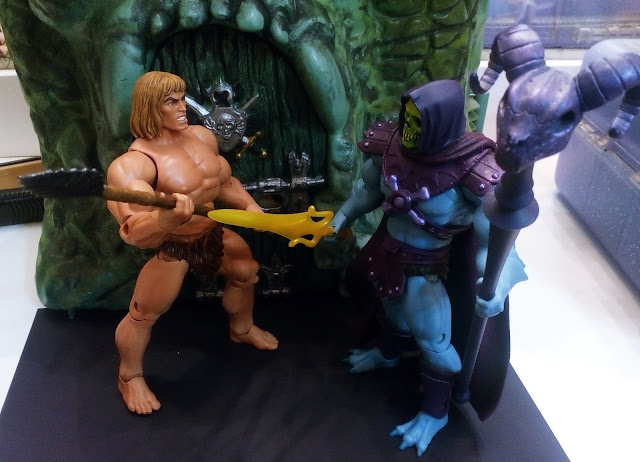 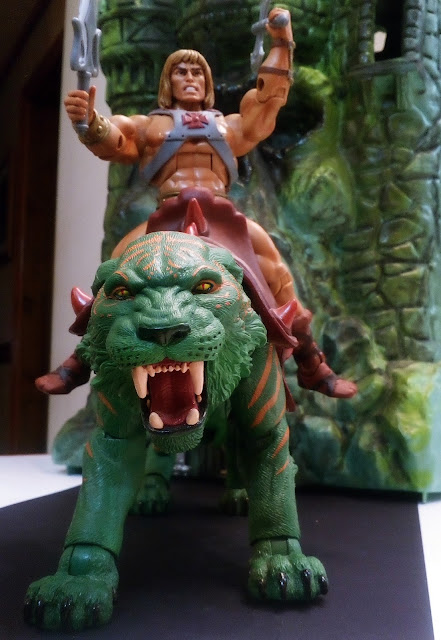 An alternate shot of the struggle between He-Man and Beast Man: 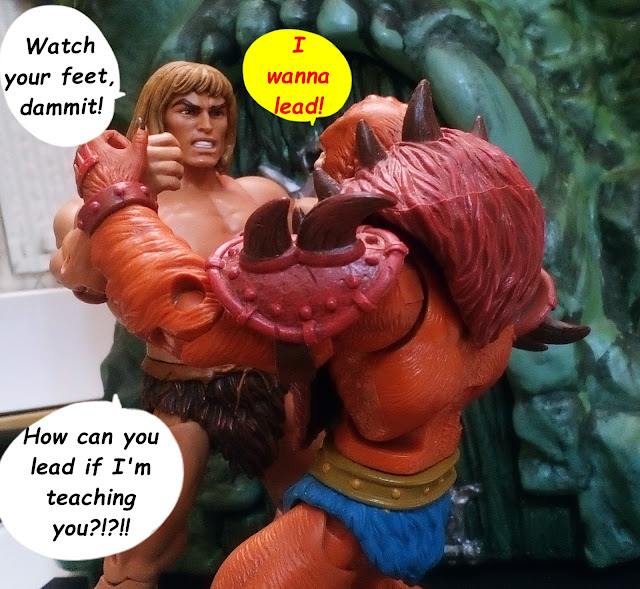