(I have a concussion as I type this, so you'll have to forgive any odd phrasing that may pop up in the course of this review. If anything, it'll probably just amount to some typos I don't catch.) 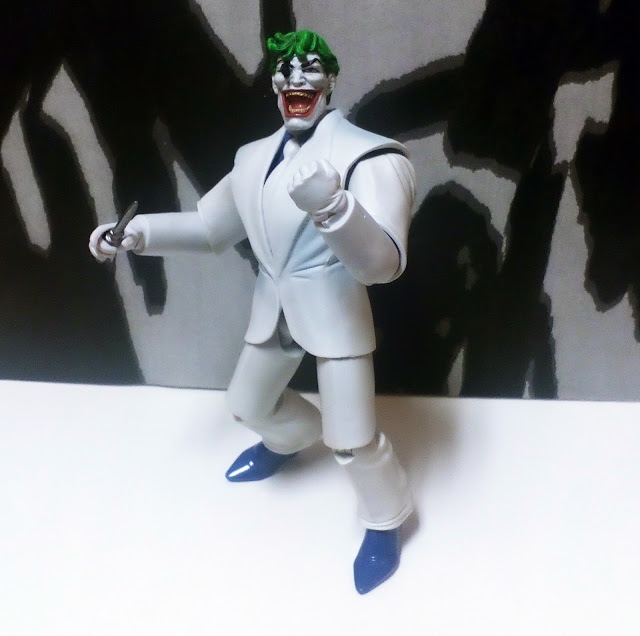 As someone who was an avid collector of Mattel's DC Superheroes and DC Universe Classics lines, I've bought surprisingly few of their DC action figures in the last several years. This is due to several factors, chief among them the rising prices and increasingly poor execution of many of their products. Let's face it, while $20 has become a pretty standard price for a mass market figure in the six-ish inch scale, it's still a nice chunk of cash for one toy. That alone would make me more selective, as I don't have a whole hell of a lot of disposable income, but couple it with Mattel's cheapness compromising more and more of their figures, and there just haven't been many of them that I felt warranted their bloated price tags. There have been quite a few that I wanted based on prototype photos, but any desire I had to own them dissipated once I saw the actual figures in person. It's a disappointing turn of events, but hey, at least it saved me money! 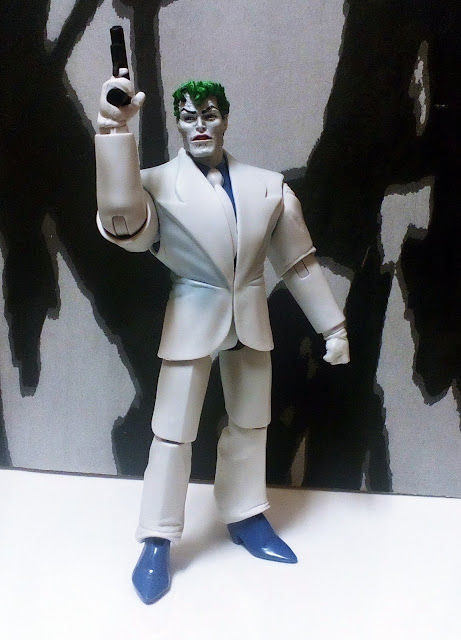 Obviously, there have been a few exceptions. The small subset of figures based on the seminal Batman story The Dark Knight Returns, spread throughout their Batman Legacy and DC Multiverse lines over the years, are among them. Mattel addressed the one glaring whole in that set with the release of the Joker as he appeared in that story.

The sculpt is very good overall, and both heads are excellent. Whichever head you choose to display him with, the Joker looks as if he stepped right off the printed page. One head has a calm expression, while the other captures the Joker at his maniacal best, with a removable batarang in his right eye, as seen in his climactic battle with the Dark Knight in book three of the story. His right hand is sculpted to hold the gun perfectly, but also holds the knife with no issues. Perhaps owing to the lack of paint apps on most of the figure, the heads feature much better attention to paint detail than most of Mattel's figures these days. Paint apps are clean and precise, with a nice wash over the skin that really captures its appearance in the source comic. The open-mouthed head has a gloss coat over the interior of the mouth to lend it a wet appearance. There is also a well done wash on the hair to bring out the sculpted details. The paint apps on the rest of the figure are basic, but overall, this is fairly impressive work for a mass market toy. 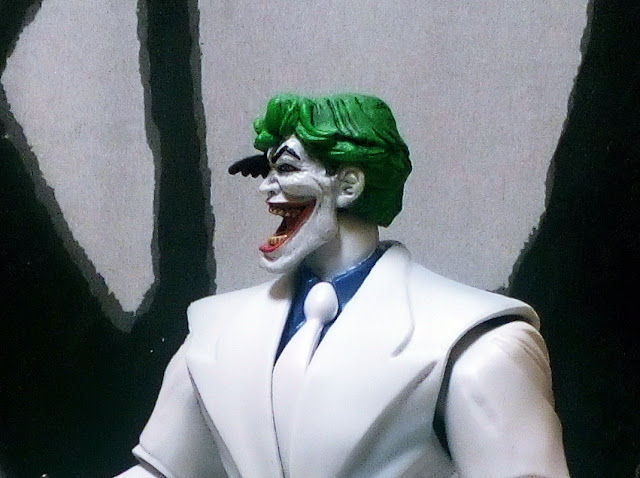 Articulation is more or less the standard for this line. The Joker has ball joints at the head, shoulders, and hips, swivel & hinge joints at the elbows and knees, swivels at the waist, wrists, and upper thighs, and hinges at each ankle. The lack of bicep swivels is made up for by the swivel/hinge elbows, and the missing abdominal hinge isn't an issue, since the suit coat would greatly hinder its movement anyway. The hips are the MOTUC style joints, which I prefer to the normal Mattel hip articulation. They are rather unsightly, but the long coat covers them without impeding their range of motion much. While the articulation is adequate, and you can get some very cool poses, it is a bit outdated; swivel & hinge wrists should be standard by now, along with double knee joints. Hasbro has been implementing these points of articulation on most of its Marvel figures for years, and Toy Biz before them, so it's frustrating that we DC figure collectors are still getting figures that omit them. 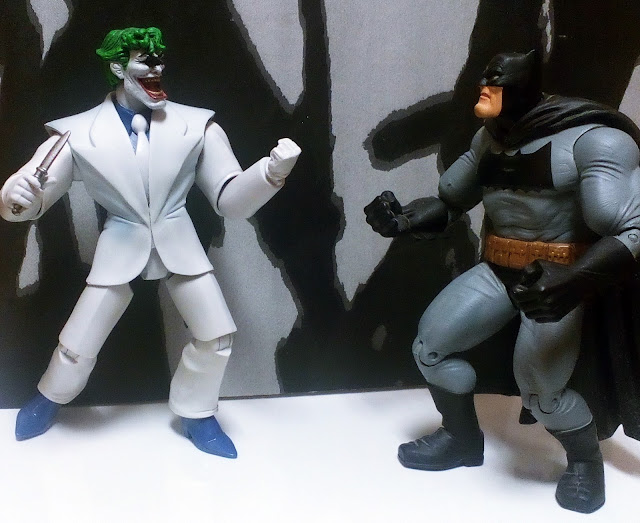 The Joker includes the previously mentioned alternate head, gun, and knife, along with a torso for the King Shark build-a-figure. Even if you don't give a damn about the BAF, it's still a solid set of accessories, and it's particularly nice to see Mattel including alternate heads on some of their mass market figures. Hopefully we'll see this more often going forward. 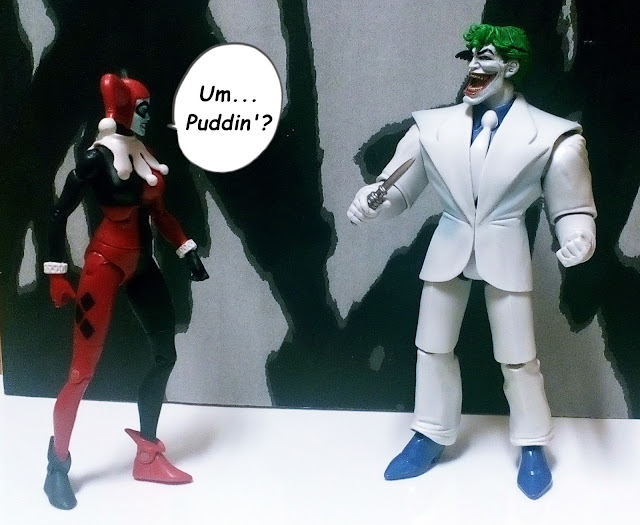 Despite a few mostly minor flaws, this is a great figure, and a real standout in Mattel's recent DC offerings. This Joker figure is a fantastic addition to anyone's collection, and is an absolute must for anyone who already has some of the previous DKR figures. He's a bit too large to work scale-wise with most of the DCUC figures, but he scales nicely with Mattel's DKR figures, which tend to run larger. Walmart currently has the price of DCM figures cut to $16, so that's the place to look if you want one. I suggest grabbing one now if you have any interest, as the price is likely to rise once the supply dries up. That's it for today! Barring any unforeseen delays, the regularly scheduled MOTUC review should return next Tuesday! For now, scroll down for more photos! 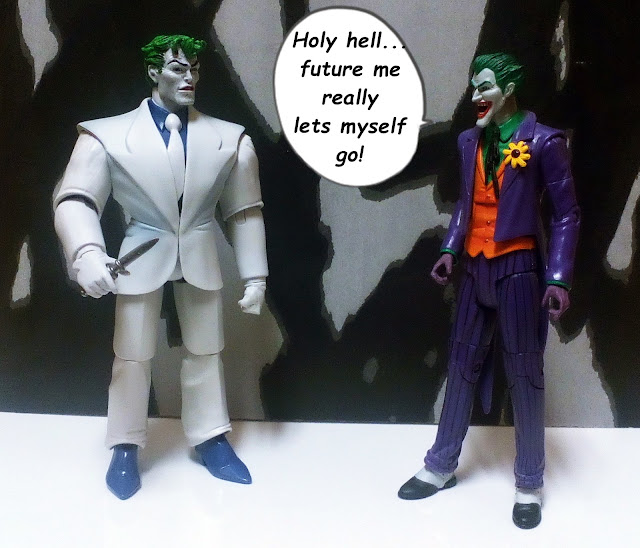 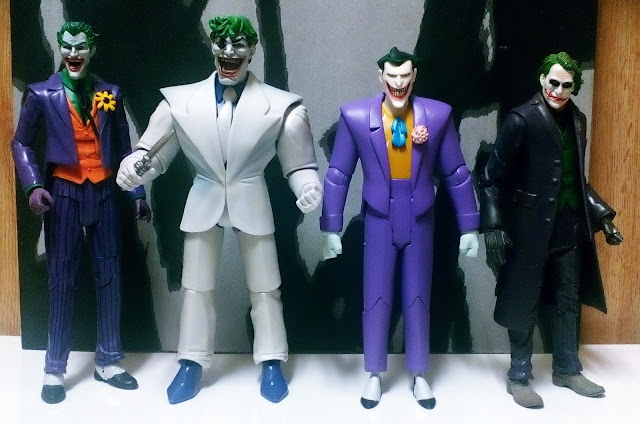 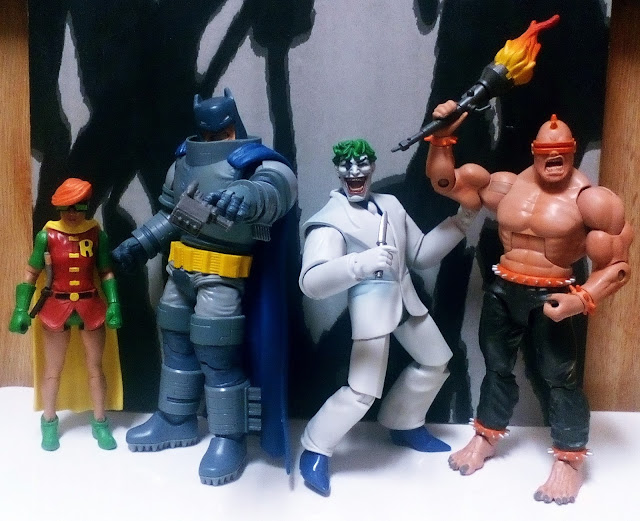