The Evil Horde arrived during a period of great experimentation in the original Masters of the Universe line. By this time, most figures were defined by their action features, and the line had become such a monstrous success that Mattel didn't hesitate to invest in lots of new tooling for most figures. Part of this experimentation was occasionally incorporating aspects of other types of toys, such as a transforming aspect to create the rock warriors, and an interlocking building block style of play for Modulok. It wouldn't be an exaggeration to proclaim Modulok one of the line's greatest successes, and he (They? It?) was popular enough to inspire the creation of another figure with the same gimmick the following year: Multi-Bot. 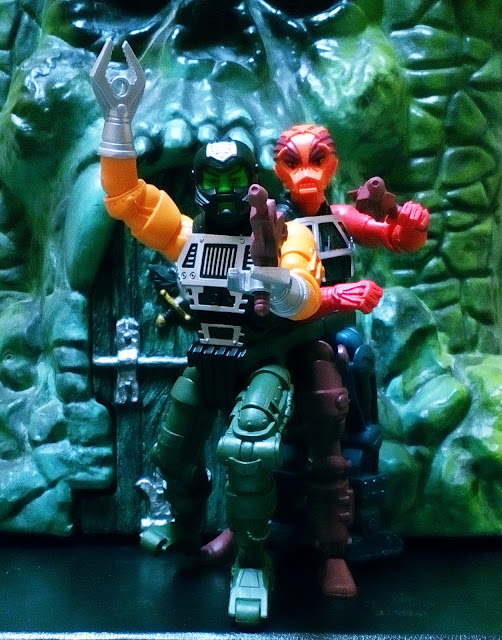 Multi-Bot was dismissed by some as a mere retread with none of the great design and panache of the original, and is still treated as such by many adult collectors today. Personally, while I found Modulok's monstrous design more to my liking, I always preferred playing with Multi-Bot. In that intervening year, Mattel's designers refined the design of the interlocking pegs and holes to address the issues Modulok had, and the result were pieces that attached and detached more easily. This made for a toy that was simply more fun to play with. I tended to keep Modulok in a single form, and ditch the plain red arms altogether, since they were very difficult to attach, and constantly fell off. Multi-Bot, on the other hand, was a toy I constantly disassembled and reassembled into numerous configurations. So, while the monstrous space demon vibe Modulok has appeals to me, I have a soft spot in my heart for Multi-Bot that many adult MOTU fans do not. 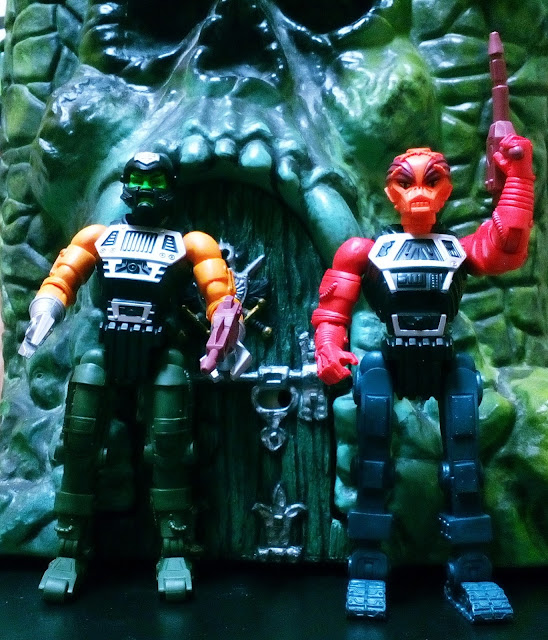 With Mattel's long history of quality control issues, there was some concern about the MOTUC iterations of Modulok and Multi-Bot. There were many parts to each figure, and the QC had to be on point for them to function properly. Unfortunately, I don't yet have the MOTUC Modulok, but I can say with some relief that they nailed it with Multi-Bot. MB includes a total of 28 interchangeable pieces, and they all fit snugly and disconnect without much trouble. The pieces are engineered well, and the neck connectors allow for a separate point of articulation at the base of the neck, which is a nice bonus. MB is even more fun to assemble into crazy configurations than the vintage version, thanks to the increased articulation. While it is very easy to place him into the default configuration shown on the box, with six legs and a torso and head at each end, I find that I actually prefer having the two bots separate. Of course, part of the fun is taking him down from the display and reconfiguring him whenever the mood strikes, and he works great in that regard. 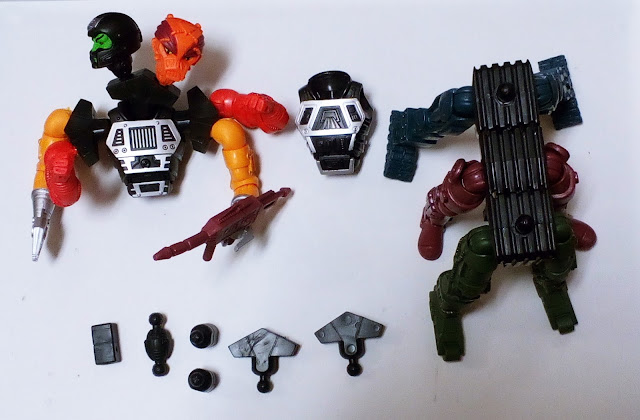 Sculpting is excellent, successfully translating the vintage design to the MOTUC aesthetic. Even the odd helmet on the green head, which I always inferred as that head having a big metal mustache, is presented in loving detail. While I normally find figures that are straight updates of the vintage figure with nothing new added boring, MB's design naturally allows for far more details than are standard in the MOTUC line. The Four Horsemen took the mechanical details present on the vintage figure and extrapolated plenty of additional details that fit perfectly with a design that is firmly rooted in the vintage look. I was particularly surprised and pleased to see circuitry sculpted in the interior portion of the abdominal hinges, which are only present when the upper part of the torso is bent backward. This sort of attention to detail is a big reason why the 4H remain some of the very best in the business. 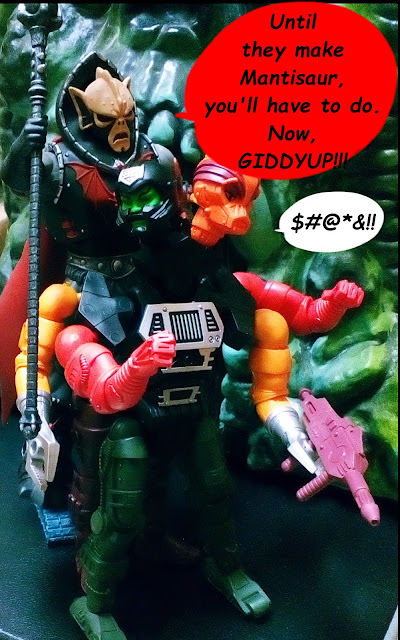 Unfortunately, the paint lets the sculpt down a bit. The paint is very clean where it counts most, on the faces and the eyes, and paint apps are generally quite clean. the problem is that there just aren't enough of them. There are some nice metallic accents on the arms and legs, but the legs are basically molded in the proper color and left almost completely plain. The back of the torso pieces are also completely unpainted. Given the complexity of this figure, if costs had to be cut, I'm glad they cut the paint apps rather than compromising the main feature by using a lower-quality plastic, but it's still a shame. Given the retail price of the figure, one would think the additional costs would have been covered.

Articulation is quite good. Each of the torsos and limbs have all the standard MOTUC articulation, with some additional POAs here and there. As mentioned previously, the neck pieces have an extra POa at the base. The arms have hinge & swivel elbows, as opposed to just a hinge. Swivel & hinge joints are on the purple set of legs, but the other legs only have hinge knees, for whatever reason.

MB's lone accessory is his rifle, which splits into two pieces, just like the vintage one. Like much of the figure, is' molded in the appropriate color and completely unpainted. Some would call this "adhering to the vintage design;" I call it being cheap. 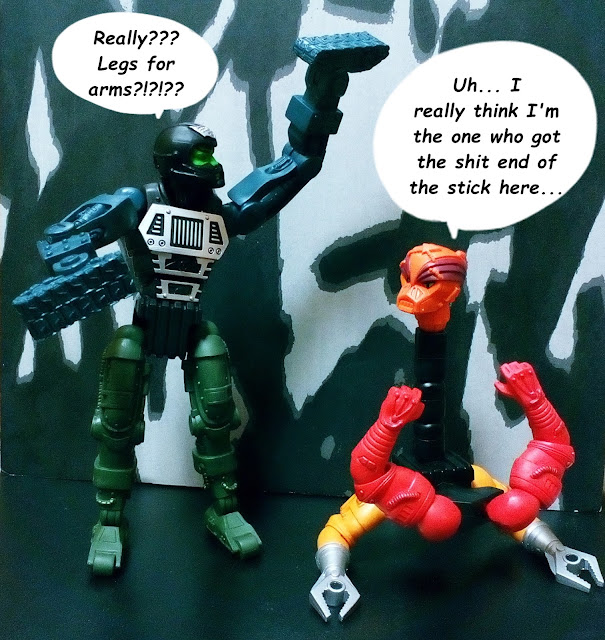 Despite a few flaws caused by Mattel's incessant cost-cutting, Multi-Bot is a very cool figure with an awesome action feature. That such a figure was produced so well with a design that is far more complex than the original is testament to the skills of the 4H and Mattel's design team. (Sure, their designers have caused many headaches for collectors of this line, but credit where it's due! They knock it out of the park sometimes.) Multi-Bot can currently be found for well below his retail price, so grab him cheap while you can! It's tempting to pick up an extra so I can make even bigger and crazier bots from the pieces. My problem now is finding an affordable Modulok so I can build that Ultrabeast!
Posted by Waylon Piercy at 11:30 AM