Rant Review: Masters of the Universe Classics The Faceless One figure

As longtime friends and Rant readers are no doubt aware, since I was three years old, Masters of the Universe has been pretty much my favorite thing ever. (Yes, even more than Batman, LEGO, Universal monsters, and The Simpsons. Welllll... maybe it's tied with those last two.) My lifelong love of MOTU has had plenty of ups and downs over the years, though that's a story for another time. Next year's MOTU Day, perhaps?

Anyway, many readers have surely noticed an odd lack of MOTU articles here, despite my love for it. There are a couple of reasons for that. When I started this blog seven years ago, it was specifically devoted to the classic horror movies I cherish so much. As it gradually expanded to cover most anything that interested me, I began to feature the occasional toy review. By that time, however, I'd had to stop buying the MOTU Classics line due to losing my job, as I simply couldn't afford it any longer. Once I was back on more stable footing, I resisted getting back into the line because I still didn't have a lot of disposable income, and so much had been produced in the meantime, and so much of it was so expensive on the secondary market, that it was rather overwhelming. Last week, however, I finally decided to just go for it, and try to get the MOTUC stuff I want the most when I'm able to find it at a price I can live with. The first figure I wanted that I saw for a good price was Evil-Lyn's pop, the Faceless One. 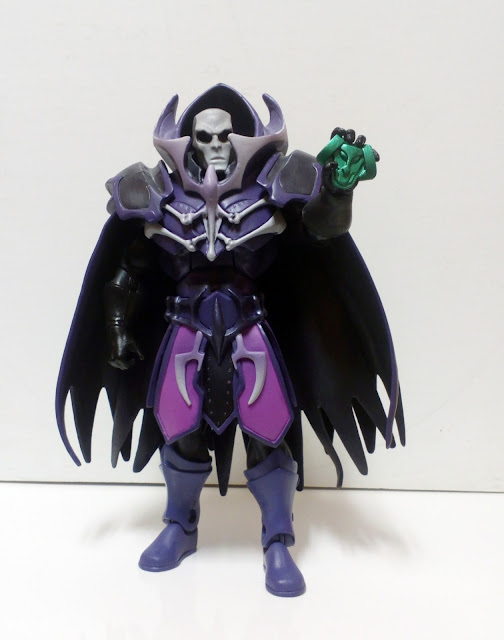 Created for the 2002 animated series by Mike Young Productions, the Faceless One has connections to several established characters, most notably Evil-Lyn, as noted, and as the source of Skeletor's Havoc Staff. I immediately wanted a figure of the character when I saw him on the show, but unfortunately, it would take nearly a decade for one to be produced, and even longer for me to get one of them! Thankfully, he was well worth the wait. Scultors the Four Horsemen have captured the character's detailed design in the MOTUC style perfectly, and he looks quite imposing on the shelf among other figures. (It should be noted, however, that he has at least 30% more face than anyone calling themselves "The Faceless One" should really have.) His color scheme is evocative of the 2002 design for Evil-Lyn, so he will pair well with the MOTUC repaint of her figure in those colors. His accessories include his Havoc Staff-- note that my figure did not come with this, but I didn't have a problem with that since I got him so cheaply-- and the Ram Stone, which his left hand is sculpted to hold perfectly. There is also his large cloak, if you wish to count it as an accessory.

The figure has the usual MOTUC articulation, with ball-jointed head, hips, and shoulders, cuts at the waist, wrists, biceps, upper thighs, and boot tops, hinges at the elbows, knees, ankles, and torso. The cloak may look as if it hinders the head's range of motion, but it really doesn't interfere at all. The figure also stands very easily, despite the cloak's weight.

All in all, this is a great figure, and while he may not be an essential part of every MOTU collection, he is an essential figure for mine. Anyone who enjoyed the 2002 series will likely want him as well, and thankfully, he's one of the cheaper figures on the secondary market. Now that I'm back to collecting the MOTUC line, expect to see much more of them here! In fact, there's a figure arriving today that I'm very excited about; you can expect to see it featured here very soon.
Posted by Waylon Piercy at 12:45 PM