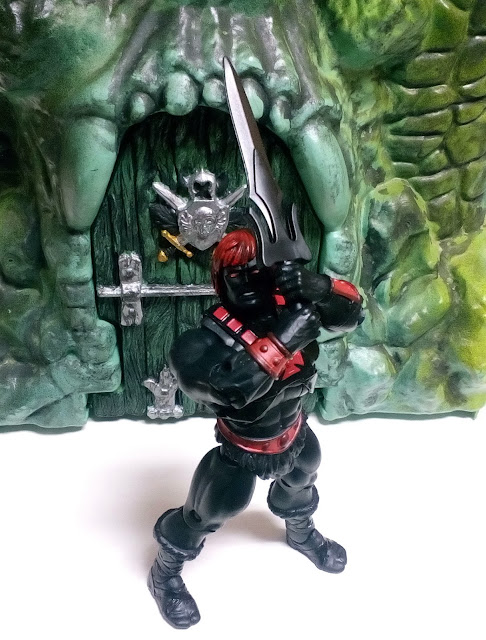 For a few years, Mattel "treated" MOTUC customers to a chase figure each year. These figures would show up on their adult collector website randomly several times throughout the year, usually disappearing again within minutes. 2016's chase figure drew from a German audio story from the '80s that saw Skeletor opening a portal to a nightmarish dark dimension seeking aid in defeating his mortal enemy, and finding the He-Man of Anti-Eternia. Drawing his power from Hell-Grayskull, shortened to Hellskull in the Classics line, this He-Man was an immense evil that had conquered his own planet. Where Skeletor sought an alliance with him, AE He-Man had other plans. When Mattel stopped producng the MOTUC line at the end of 2016, their remaining stock began appearing on other sites, and AE He-Man turned up on Gamestop's website, of all places. He's still available as I type this, so hurry on over there if you want one! 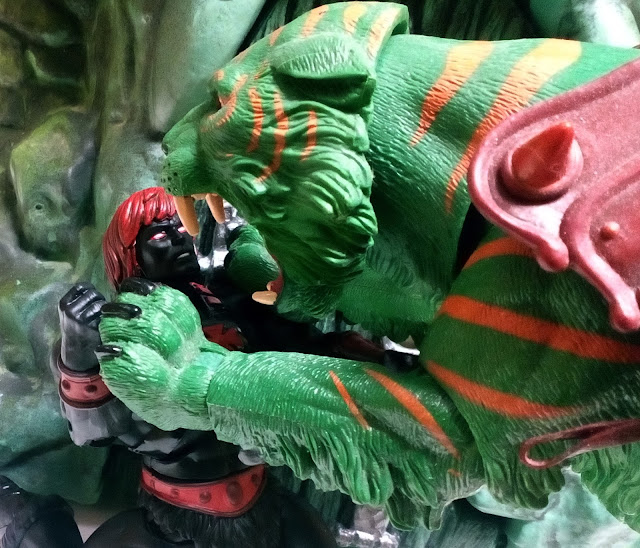 I rarely touch on the packaging, since it's the same basic design for the entire MOTUC line, but AE He-Man got some sweet custom packaging. It's just the regular MOTUC art tinted red and black to suit his color scheme, but it looks awesome. I always open all my figures, but I was actually tempted to display this one in the package because he just looked so damn cool inside it. Of course, I got over that feeling and opened it before long, but this is one of those very rare cases where I'd pick up an extra to display one in the package if I could spare the cash for it. 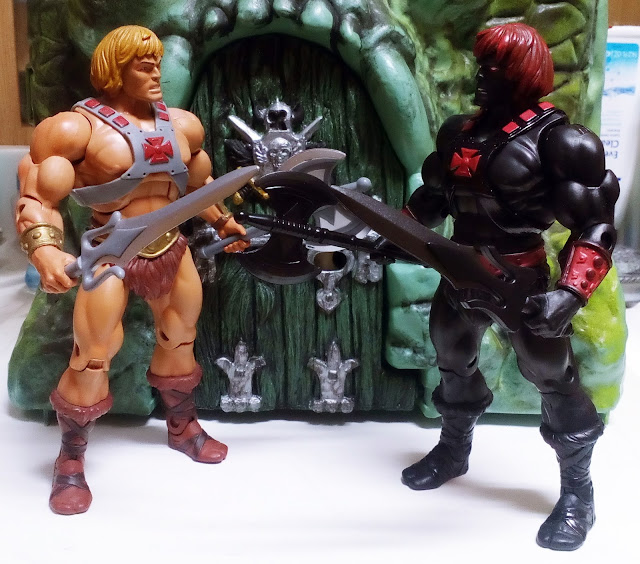 As a He-Man repaint, AE He-Man has the same sculpt and articulation we've already seen many, many times in the MOTUC line, with one difference. For whatever reason, the abdominal joint on my figure will not bend forward at all. It bends backward just fine, but once you move it forward into a default standing position, it refuses to go any further. It's not a huge deal, but it is annoying, and worth noting. All other points of articulation work very well, and I had no loose joints on my figure. 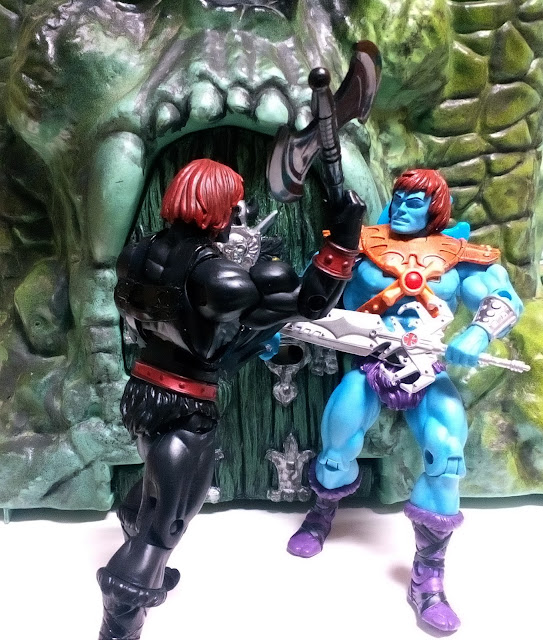 The standard He-Man sculpt is more than eight years old at this point, and it still looks great. The 4H really nailed the design their first time out. I do wish Mattel had included the Alcala-style He-Man head along with the standard one so we would be able to use the He-Man head sculpt of our choice. As 100% He-Man repaints go, I have to say this is my favorite. As much as I like the MOTUC Faker, AE He-Man looks far more sinister and intimidating. The red and black color scheme is very eye-catching, and the figure really stands out on the shelf. I went with a red and black color scheme for the weapons and armor with my custom Faker in the 2002 MOTU line, so it's cool to see that officially adopted here. The paint apps are all very clean, thankfully, as any slop would have been very obvious, given the color choice. 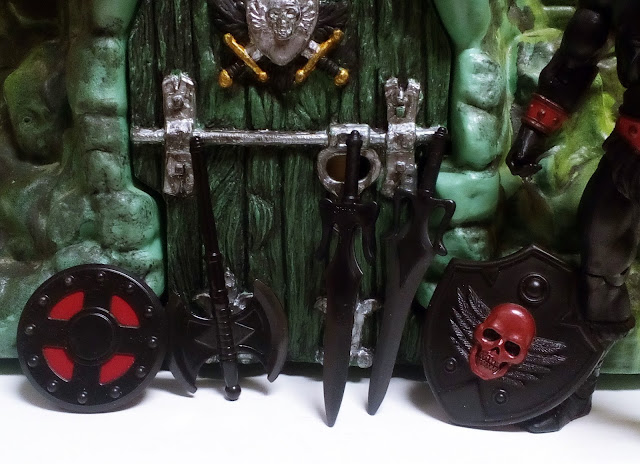 AE He-Man is loaded with accessories, even without an extra swappable head. He has his armor, of course, if you count that, along with repaints of the standard He-Man sword, axe, and shield. However, he has a bonus sword using the Alcala-style sculpt, as well as the shield from Castle Grayskull Man, all in his signature color scheme. These extra weapons let you personalized your AE He-Man a bit, which is very handy since he's 100% repaint of an often-seen figure. 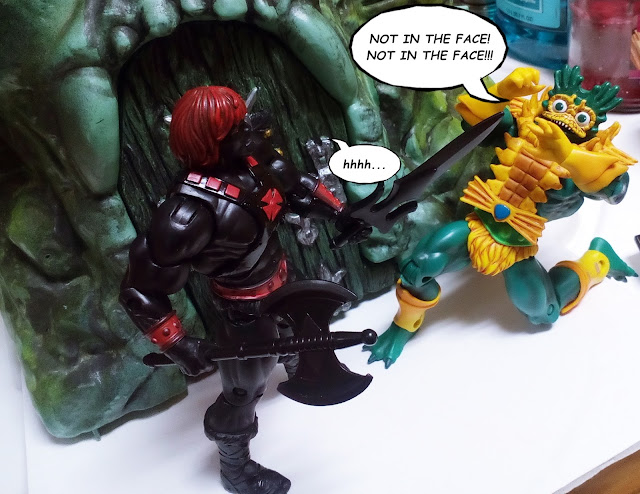 Overall, this is a fantastic figure, though that price does sting a bit. With not a single new part, the profit margin on this figure has got to be even higher than normal for this reuse-heavy line. The lack of new pieces may hurt the figure's standing in the minds of some, but for me, AE He-Man shows how a well thought out repaint can breathe new life into an old figure, and make it well worth a (slightly overpriced) purchase. 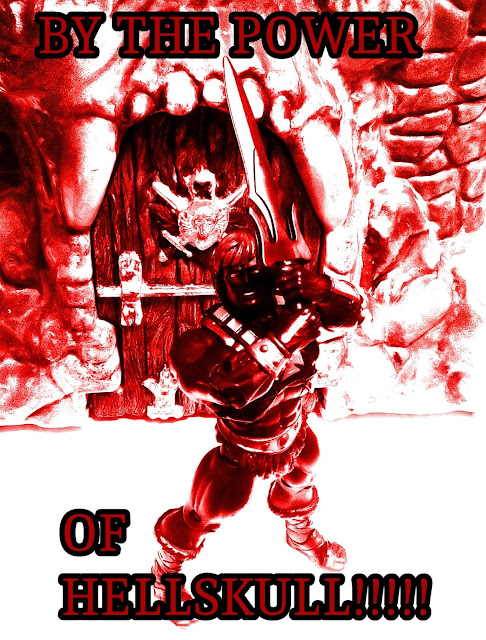