Obviously, the big news this week is Sunday's tornado damage and the subsequent flooding. My girlfriend and I were at a restaurant Sunday afternoon when things began to get bad; we could see the sky to the west through the large windows, and it was literally black. Here's a photo she took on her phone. 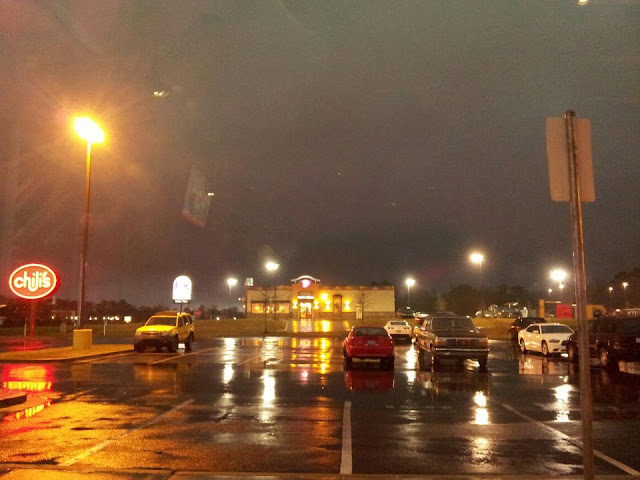 The sky was much darker than it appears in the photo. Minutes later, we saw the tornado itself, and we headed into the kitchen. After a few minutes, it was clear the the tornado had gone in another direction, as it had been close enough that we would have known by that time if it had continued toward us. After things calmed down somewhat, we managed to find a path back home that wasn't blocked by fallen trees. Even thought the tornado had veered off in another direction, trees and debris from buildings were everywhere. After a few hours without electricity, the power returned; it went out for a while a few more times, but things were basically back to normal for us after that.
Not everyone in the area was so lucky. Last I saw, the official tally for Petal and Hattiesburg stands at 1439 homes damaged, and 298 of those were completely destroyed. More than 200 people lost their homes, though fortunately, no one was killed. There is much to do in the area in the aftermath; thankfully, the community has pulled together nicely to help those who were affected, and to rebuild.

Moving from that somber news to frivolous matters, DC Comics revealed that Geoff Johns is leaving Green Lantern. Johns took over the series in 2004 with Green Lantern: Rebirth, which restored dead boring douchebag Hal Jordan as the "main" GL and restored the Green Lantern Corps. The GL line quickly expanded into a franchise, supporting several series as the scope of the books broadened with the introduction of hundreds of new characters and the aggressive fleshing out of the mythos. I feel that Johns's GL lost much of its momentum and quality after Blackest Night, but it's still been a remarkably consistent and solid series over the course of the past decade. The rest of the creative teams on the GL books are leaving as well, though it remains to be seen if all-new teams are taking over the books, or if there will just be some shuffling around. Personally, I'll be surprised if Peter Tomasi doesn't take over the main GL book, but we'll have to wait and see. Whoever takes control of the franchise's steering wheel has some big shoes to fill.

DC's May solicits reveal the collections of the controversial Before Watchmen comics, which are due out in June and July. There has been much speculation about exactly how DC would go about collecting the various series, and they have settled on grouping series together (mostly) by writer. For my part, the only ones I plan to get are the Minutemen/Silk Spectre and Rorschach/Comedian collections. The other series were mostly just decent, and the Straczynski collection should be avoided at all costs, despite the excellent art. 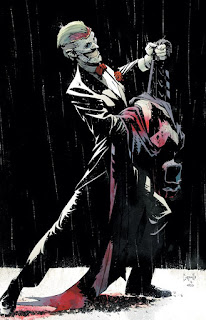 The Death of the Family storyline concluded in Batman #17 this week, and Scott Snyder and Greg Capullo absolutely killed on this issue. Their run just keeps getting better and better, and I can definitely see it  becoming one of those legendary runs that will be remembered fondly and highly recommended to new readers in years and decades to come.

Here's a photo album of a border collie who likes to balance various objects on her head.

I was able to get Halo 4 last week, thanks to a timely sale. I haven't quite finished the campaign, as I am about halfway through the final level and it's demolishing my ass, but I'm enjoying the game quite a bit so far. The campaign has been excellent overall, and even with a few irritations in the level design here and there, I don't hesitate to say it's the best campaign of any Halo game to date. (The main Halo games anyway; I have yet to play Reach.) I've seen some griping about the game not giving you enough information on the antagonist or certain events that occur, but honestly, if you find all the terminals and simply pay attention to the in-game dialogue and cutscenes, I don't see how you could be confused. I can understand some people being unhappy that you have to find the terminals and watch those videos to get the antagonist's background, but it's still part of the game, so it's not as if you're forced to go elsewhere for the information.
On every technical level, the game is absolutely superb. The graphics are probably the best of any game released to date for any game console; I really can't believe 343i managed to get a game on the Xbox 360's 7+ year-old hardware to look so damn great. Aside from the campaign, I've dabbled with the multiplayer, but haven't managed to stop playing Flood mode yet. It's loads of fun.

Reddit threads of note: Dave Grohl did an AMA, as did Bill Gates. Yes, that Bill Gates. Some pretty interesting reading in there.

Here is a gif of a cat born without the use of her hind legs. She gets by just fine.

Today is Valentine's Day, so be sure to have fun with your significant other, if applicable. (If not, be sure to get yourself some candy or something.) Here's the card my lady got today: 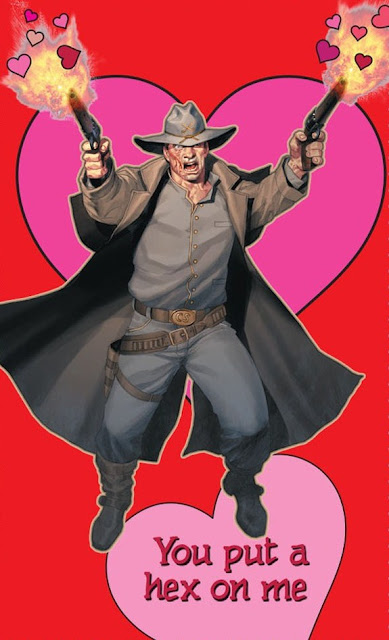 Jonah Hex'll give ya the screamin' thigh sweats.

I can think of no better way to wrap things up than with this gif of President Obama's exploding fist bump with Senator Mark Kirk at the State of the Union address on Tuesday night.
Posted by Waylon Piercy at 1:30 PM