As those of you who follow comics at all are surely aware, today marks the relaunch of the DC Universe. Kicking off today with the release of the first issue of the new Justice League series, DC Entertainment will be rolling out a total of 52 new series throughout September, introducing us to the new DC universe. A five-second Google search will give the uninitiated a good idea of the mixed reactions the relaunch has gotten in the months leading up to it, but now the first shot has been officially fired, and we need speculate no longer!
I'll be reading every one of the new series, and each one will have a few issues to get me hooked. It's been a while since I did comic reviews regularly, but this feels like a good time to get started again! You can look forward to (or dread) my thoughts on each of the new 52 series for at least the month of September; I reserve the right to bail after that, but we'll play it by ear.

A word about my rating system: It's the familiar scale of 1 to 5, with 5 being the best, and 1 sucking horrifically. Of course, stars are far too cliched for my purposes, so I put my own spin on them, as you'll see... 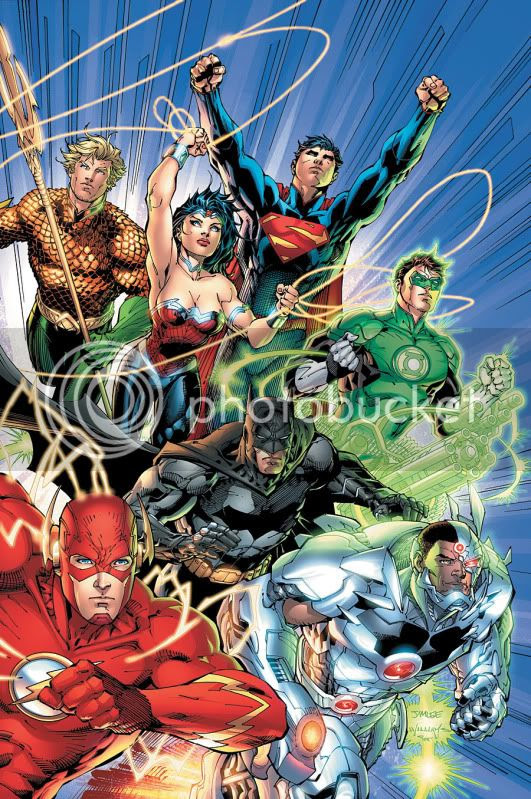 As the title that is launching the new DCU, Justice League has a lot of eyes on it. It's the flagship series, and with the superstar team of writer Geoff Johns and artist Jim Lee, pretty much anyone interested in comics is picking it up. With all the hype that has led to its release, some expectations are seemingly bound to be disappointed. Indeed, this issue is basically Batman and Green Lantern hanging out, then taking a trip to Metropolis. The initial story arc in this series is set five years in the past, and gives us the new origin of the Justice League. Batman is simultaneously pursuing a rather odd creature and evading the Gotham City PD when he encounters GL. (GL is Hal Jordan, much cockier than usual in this early stage of his career.) The two of them banter, gain a clue or two regarding the identity of the threat that will soon necessitate the Justice League's formation, then head to Metropolis, where we get a glimpse of Cyborg in his civilian identity, and Superman shows up in time for the final page.
It's not a bad issue by any means, but it ends just as it seems to get rolling. Half of the JL does not even put in an appearance, which is sure to disappoint new readers who pick up this issue based largely on the promise of seeing the Justice League in action. I have no doubt things will pick up from here, but it is a rather underwhelming debut issue, especially when you take into account all the hype.
The art is your typical Jim Lee fare. I got utterly burnt out on this artistic style years ago, but nobody does this style better than Lee, and he's definitely brought his A-game. The often-maligned new costume designs look quite good here, even when compared to the (presumably) earlier rendering of them on the cover, which was the first image we ever got concerning the New 52. The "armored spandex" look for Superman, in particular, comes off far better here than in the vast majority of art we've seen to date.
Justice League #1 is a solid, if unspectacular, issue that promises bigger and better things to come. If you're on the fence about picking this up, I do recommend giving it a shot. Just keep your expectations at a realistic level.
My score:

As Justice League is the only one of the New 52 shipping this week, I'm including a bonus review of DC's other title that was released today, not to mention the one that led to the birth of the new DCU! 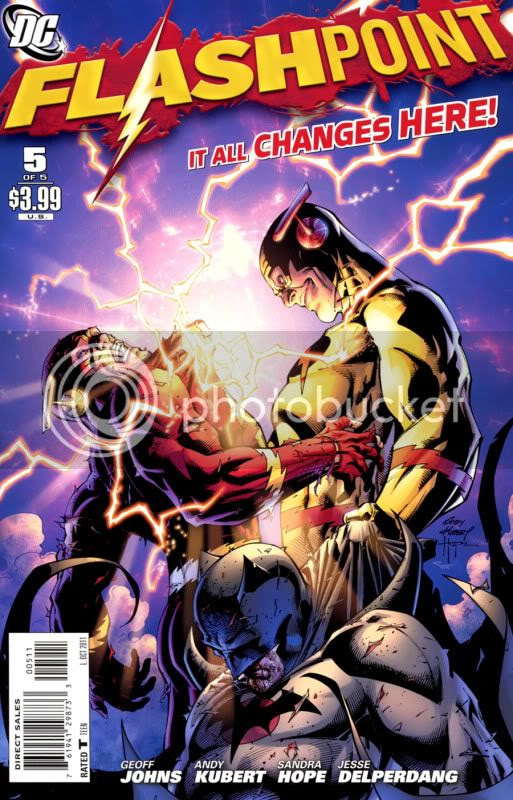 The conclusion of DC's big summer event had some of its thunder stolen by the imminent arrival of the New 52 and all the accompanying fanfare. This altered-reality storyline has still nearly monopolized DC's output for the past few months, with more than a dozen tie-in miniseries of varying quality.  Everything comes to a head here, as Wonder Woman and her Amazon army finally meets Emperor Aquaman and the army of Atlantis in battle. Flash is finally faced with Zoom as well, and we learn exactly how the timeline was altered. It's not what you'd expect, and the twist is both logical and satisfying. The Batman of the Flashpoint world has one of the key scenes in this issue, and Superman finally enters the battle as well. However, our view of the war is abruptly cut short as Barry races off to restore the timeline, and before you know it, we're reading the epilogue. This scene between Batman and Flash is my favorite of the issue, if not the entire series. For all of its shortcomings, the series definitely had its strengths as well, and ended on a high note.
Regarding the scene in which the new DCU is born, it amounts to a two-page spread that kinda-sorta explains how it happens. We basically see images of the former DCU and some Wildstorm and Vertigo characters, and the bunch of them kinda... merge I reckon. The epilogue takes place in the new DCU, and Barry seems to remember the Flashpoint earth, but has no memories of the reality he spent all that time trying to restore! Thus the stage is set for the DC relaunch.
If you've been following the Flashpoint event, you've probably already read the conclusion. It serves its purpose, and is more or less satisfying, if not quite on the level of what you may havebeen hoping for. Honestly, I was all set to give a rating of 2 1/2, if not for that epilogue. That scene alone gets it a slight bump!
My Score:

That's it for this week, but swing back by next week when we'll be looking at the new first issues of Detective Comics, Action Comics, Batgirl, Animal Man, Justice League International, Swamp Thing, Static Shock, and more!

Posted by Waylon Piercy at 7:30 PM