First off, a bit of housekeeping: Regular Rant readers have surely noticed that it's been a few weeks since the last MOTU post. Unfortunately, an increasingly crazy work schedule, coupled with more time spent with my niece's baby in recent months, has led to me having less time to spend on these posts. I could still hammer 'em out in half the time and keep to the schedule, but I don't do things half-assed like that. What this means is that, going forward, MOTUC features and reviews will be posted every two weeks most of the time. I may occasionally be able to get them posted in consecutive weeks here and there, but they'll be on a bi-weekly schedule for the most part. It's not all bad news, though, as I'm also planning to post one full-length comic story per month, too! If you liked the last one, you'll dig these, too! 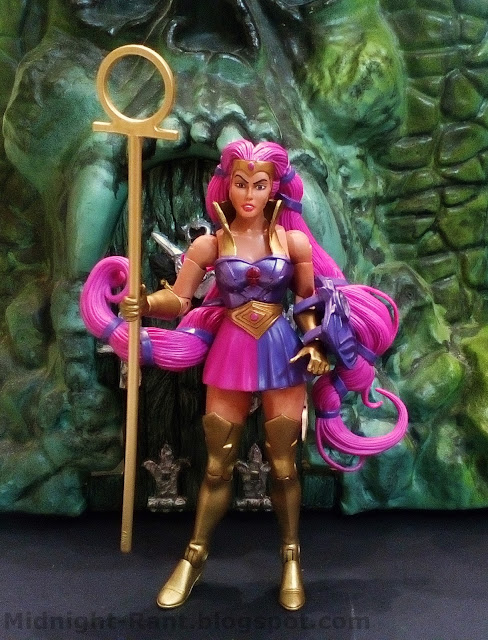 With that out of the way, let's dive right into this review! As I've made clear on multiple occasions, I was never into the She-Ra: Princess of Power cartoon. I have no nostalgia for it, but since nostalgia has never been the driving factor for me in deciding which figures I want, quite a few POP figures have found their way into my MOTUC collection. Entrapta is the latest one. I still know virtually nothing about her, but she's a mean lady with gold thigh boots and seven foot long prehensile braids, and that makes for a pretty cool figure. She's basically an evil version of Medusa from the Inhumans, with a more flamboyant fashion sense! 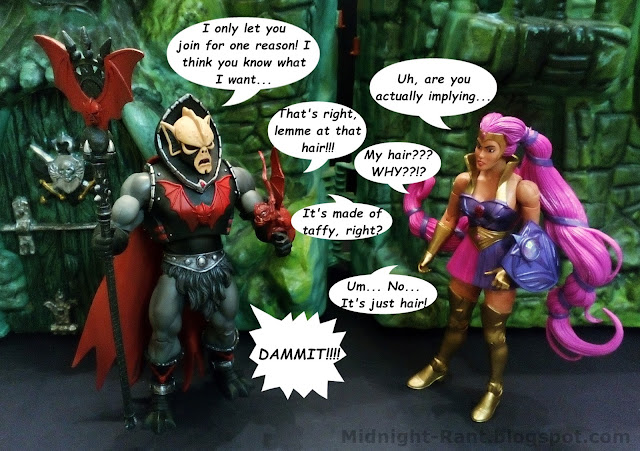 'Trapta's sculpt is among the better ones for the POP females in this line, with a great face sculpt that is both attractive and cruel. (She has that in common with Octavia.) The braids themselves are very well done, sculpted in dynamic poses, with tendrils of hair branching off from the main braids here and there, and some nice detailing. They give the figure a cool dynamic look, even when she's in a standard standing pose. There is a good bit of part reuse, of course, and at first glance, it seems that the most obvious is Castaspella's dress. This was surely done as a nod to the vintage toy, which sported the same reuse. On closer inspection, however, it appears to be a new sculpt, or at least a retool, as 'Trapta has a tiny Hordak head nestled in her bosom. If not for that, she could be mistaken for a heroic character if you showed her to someone who didn't know who she was. The Horde symbol does look odd without the wings, and I frankly would have preferred a full Horde logo instead of the nod to the vintage toy. However, the vintage toy influence usually reigns supreme in this line, so I can't really fault the figure for being held to that standard. 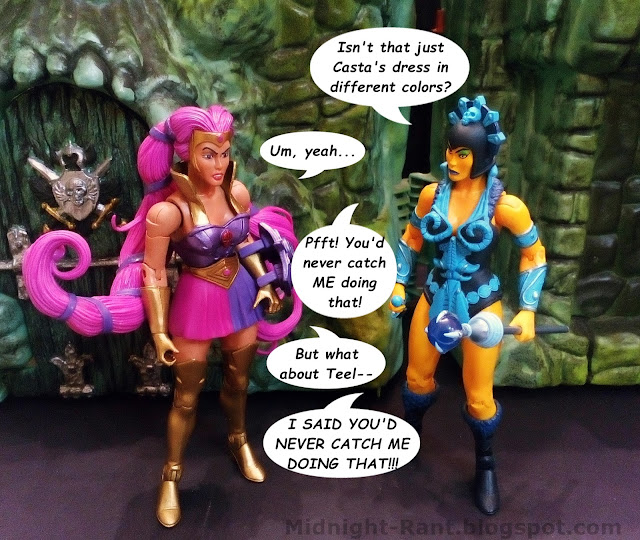 Entrapta has a very eye-catching color scheme, with her bright pink hair, gold boots and collar, and pink & purple dress. Some areas has a nice metallic sheen, and the figure really pops overall. Even among other POP females, she really stands out! She has a great look overall, and the paint apps are all pretty neat. She has the standard articulation for females using the 2.0 body, with a couple of additions. Aside from the usual ball jointed head, shoulders, and hips, swivels at the biceps, wrists, waist, and thighs, and hinges at the elbows, knees, and ankles, 'Trapta has pin & disc joints at the base of each braid, and a swivel at the last ribbon on each, near the ends. This doesn't allow for super poseability of the braids, of course, but it does help to get them into position to aid certain poses. Her head's range of motion is far more limited by the high collar than it is by her hair. I'm actually rather surprised at how well the figure stands with the weight of those braids. She is a bit tougher to get into stable poses than the standard figure, but not by as much as I expected. 'Trapta has two accessories, the standard POP shield in purple, and the Shaping Staff, as wielded by Evil-Lyn in the Filmation MOTU cartoon. As always, it's great to get cool accessories like this! Although the staff was never used by 'Trapta in the show, it looks so good with her that I think I'll let her keep it. 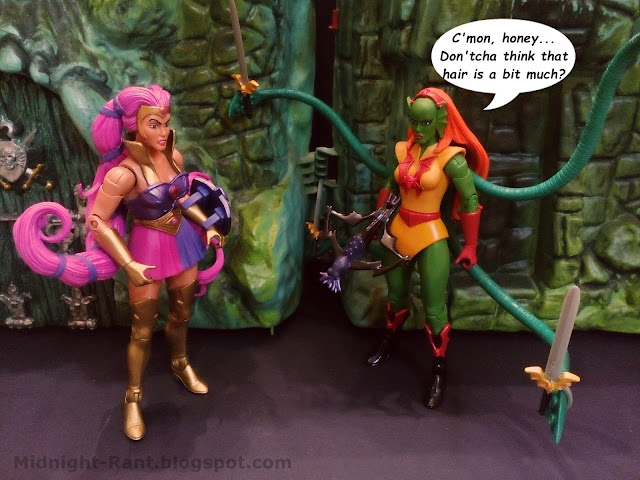 For a figure I never really cared about, Entrapta is a pretty cool figure. She's not one of my favorite females in the line, but she is one of the better ones. Her origins as a POP character and her bright pink color scheme may be off-putting to many collectors, but she's a great addition to my collection, and a nice new member to fill out the ranks of the Horde a bit more. That's it for this week, but scroll down for more photos, and come on back in two weeks for the next feature! 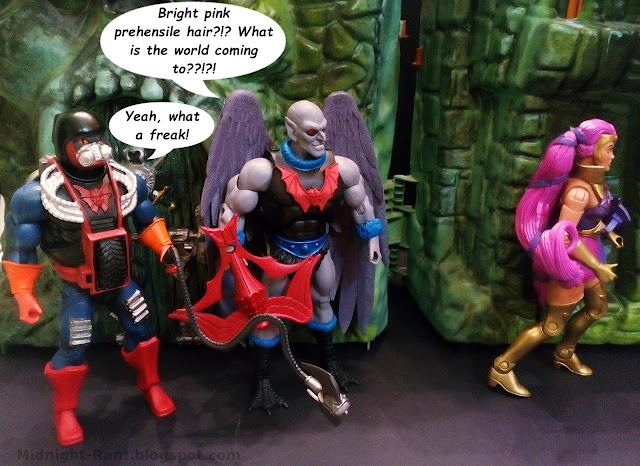 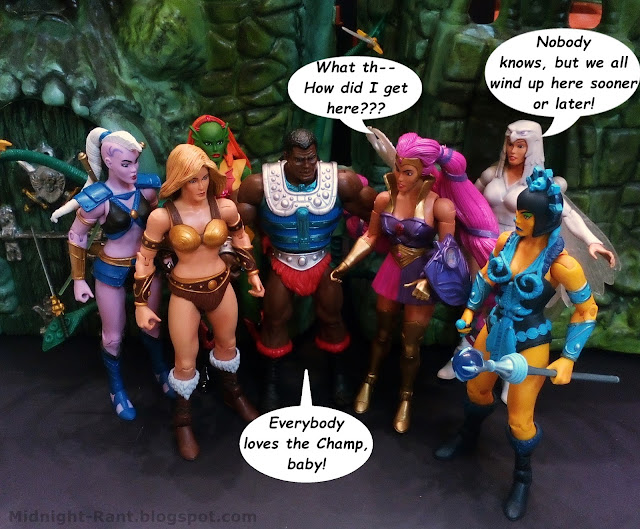