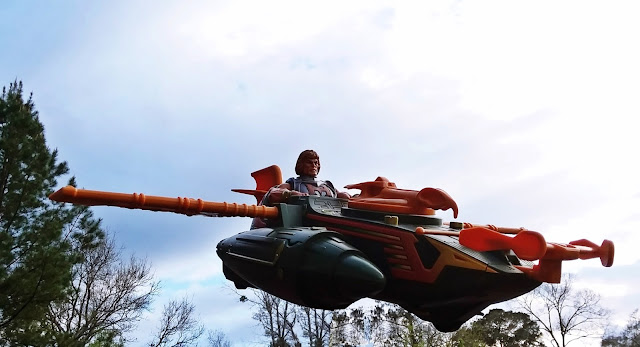 It's a big one today, as we're looking at one of the quintessential modes of transportation in the MOTU universe: The Wind Raider! On top of that, it's our 300th post, so I wanted to do something extra special. You know how I always include some humorous photos in all my reviews? About fifteen years ago, I used to do full stories in that style. I've been wanting to return to that for awhile now, and when I realized this milestone was coming up, I figured it would be the perfect time. (This is also why there was no post last week, as I had to put in a lot of extra work to get this done!) So, apart from the unrelated photo above, every photo in this week's review is part of a full story featuring the Wind Raider! Be sure to let me know what you think, and rest assured that more full-length comic stories will be showing up. Now, on to the review! 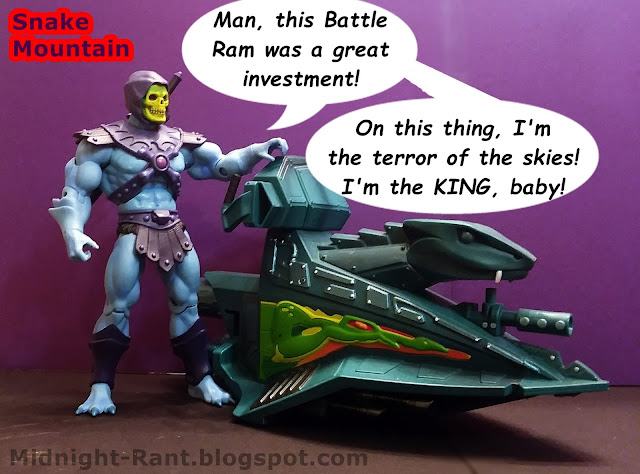 I never actually had the Wind Raider as a child, though I wanted one quite a bit. As a vehicle, its was priced higher than what was generally allowed when I could pick out a toy when we were in a store, yet it was small enough that I never asked for it as a birthday or Xmas present. (I usually aimed for something a bit larger, such as the Bashasaurus, on such occasions.) Many of my toys came from garage sales, and I never chanced upon a Wind Raider at one of those, either. Eventually, the toy disappeared from stores before I managed to get one. The 2002 line never gave us a Wind Raider toy, despite a redesigned version featuring prominently on the tie-in cartoon. 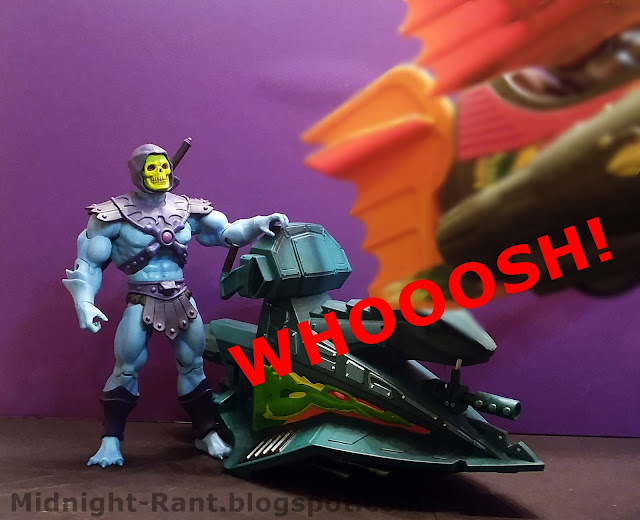 So it was that I never owned a Wind Raider until I picked up this MOTUC version recently. Thankfully, if you're only gonna own one version, this is the one to have! I don't normally comment on packaging, but as with the Talon Fighter, this package features some badass art by MOTU artist extraordinaire Rudy Obrero! It's a cool battle scene, giving us a look at some Rotons as well. While it doesn't measure up to the amazing art he provided for the original Wind Raider's package, it's still really awesome to get another great piece from him on a MOTU toy. 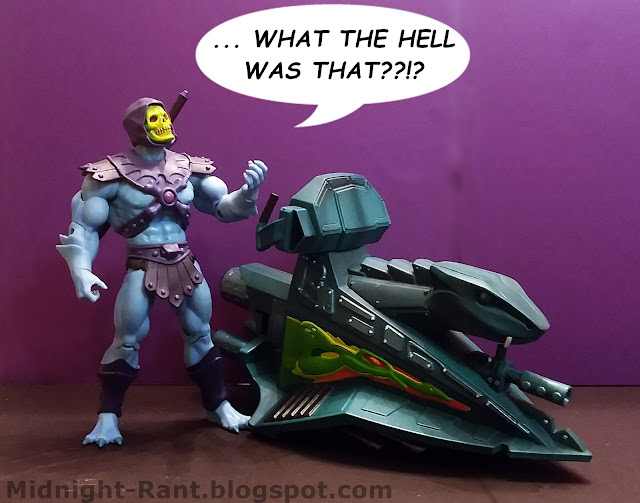 First things first: It's huge. We're not talking Talon Fighter huge here, but it's a good bit larger than I expected. It's about as long as the Battle Ram, and much wider. The sculpt draws some features from the vintage prototype, which is very welcome. As with the Battle Ram, details that were stickers on the vintage toy are sculpted here. This is very cool, and improves the overall look of the toy immeasurably. The big engine pods have panels that flip open, giving a nice peek inside. Assembly is quick and easy, as the wings snap right into place, and the rudder clips onto the back. It can take a bit of wiggling to get into just the right position, but it's secure once there. These can all be swiveled after attaching if you so desire. The cockpit is large enough to fit all standard-sized MOTUC figures easily, though getting both control handles into their hands can take a bit of work. One issue with my Wind Raider is some cloudiness in the orange plastic on the wings. There's also a slight change in the texture wherever it is present. Based on my own experience working in an injection-molded plastics factory, this is very similar to what we would see for the first few cycles after cleaning a mold. Basically, these parts should have gone to the rejects bin, and never made it to a finished product. I don't think I'll be returning the vehicle over this, as it's not terribly obvious, but it is annoying. 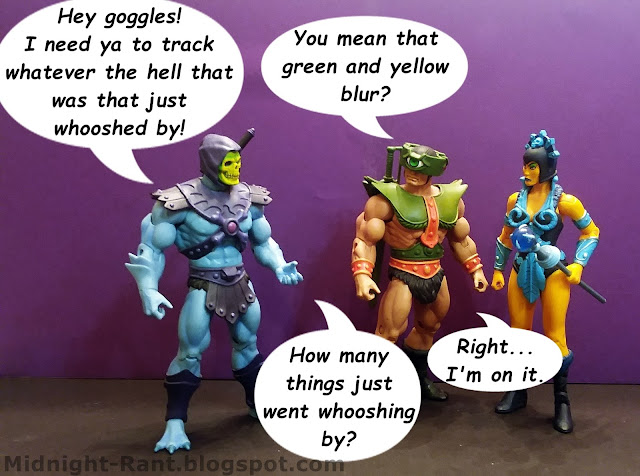 Paint/tampo work is pretty neat overall, even with most of the small details such as the control panel, and inside the engine pods. There's also an action feature, as the anchor launches, and the cord winds back up by turning the figurehead at the front of the vehicle. The button is disguised as a large rivet, and the feature is completely unobtrusive, so it gets my approval. The string is pretty damn short, however, so the posing options using it are somewhat limited. It would be nice to have a few more inches. (You know what I mean, keep your minds outta the gutter!) 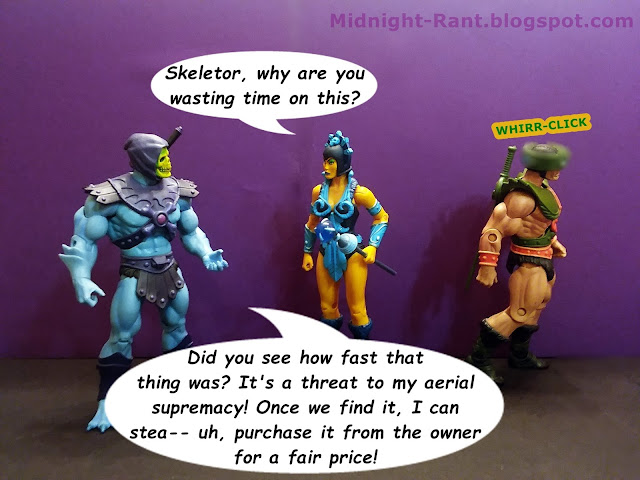 While it's rather unusual for vehicles to include accessories, the Wind Raider has one: A rather cool flight stand! The vehicle has a hole at the bottom worked into the design, and that is the point of attachment. The stand arcs down from there, resting on a large base to maintain stability. The top of the base has a swivel, increasing the posing possibilities. My only gripe with the stand is that it really should have been clear. Still, it's well-made and quite sturdy, and I'm very pleased that it was included. It's a shame that Mattel never sold these flight stands on their own, as I'm sure many of us would like some for our Sky Sleds! 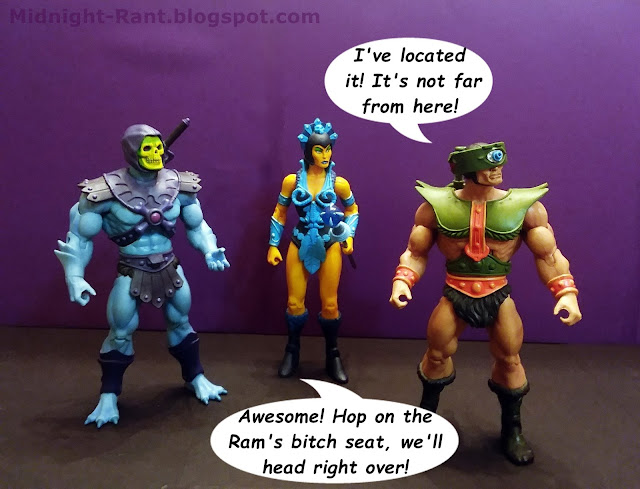 As one of the main vehicles in the world of MOTU, the Wind Raider is essential for any collection that includes vehicles at all. Basically, if you only own a single MOTU vehicle, it needs to be this one. It's ever-present in virtually every incarnation of MOTU, and its classic design is executed extremely well here. It's one of those MOTU elements that is so iconic that even non-fans will recognize it, and it adds a huge coolness factor to any display. All that aside, it's a great toy in a line that we honestly thought might never see any vehicles at all, as such things are very rare in collector-focused lines these days. Barring a movie, this is something that might not come around again, so I highly recommend getting your hands on one and enjoying the hell out of it! 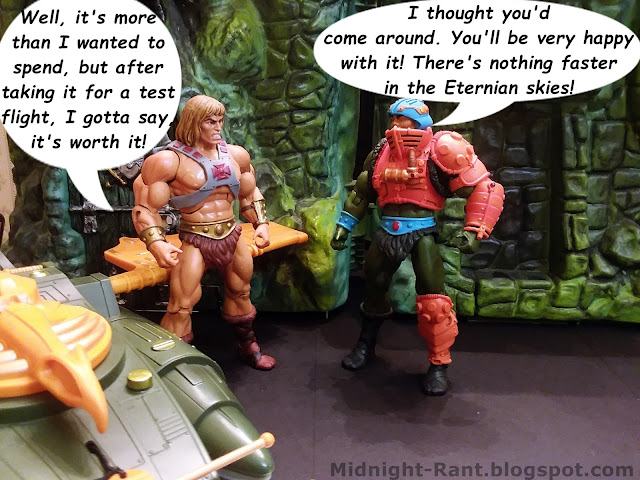 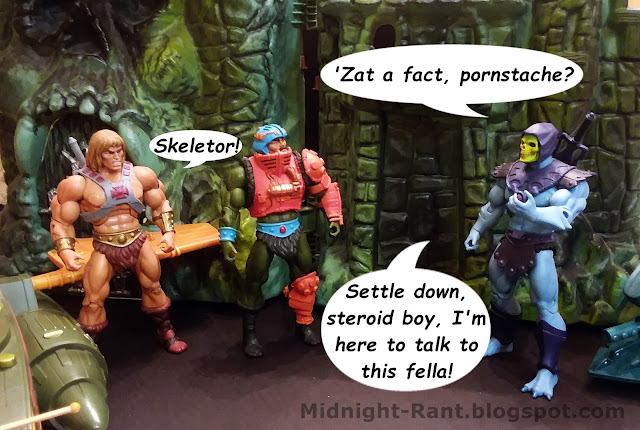 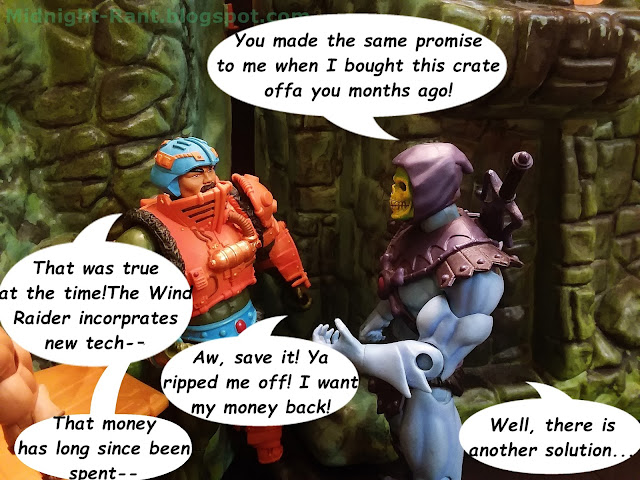 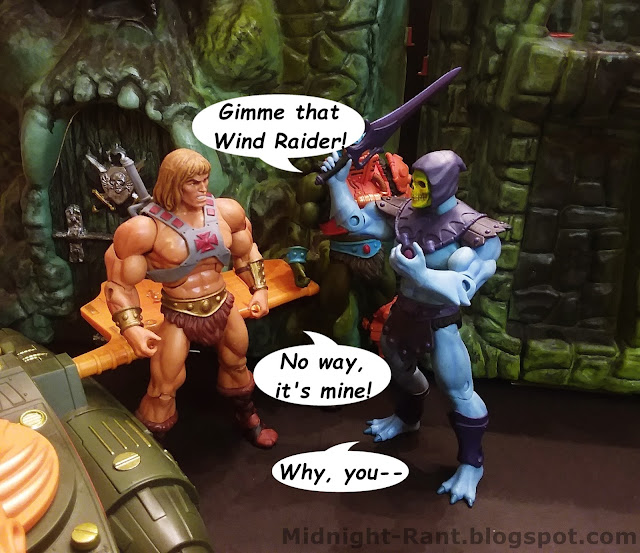 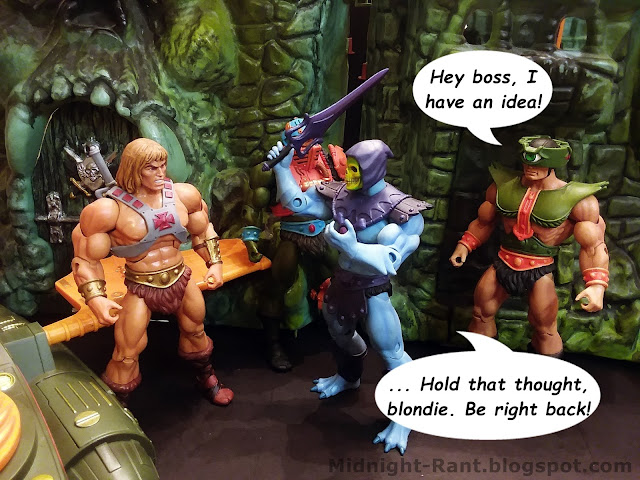 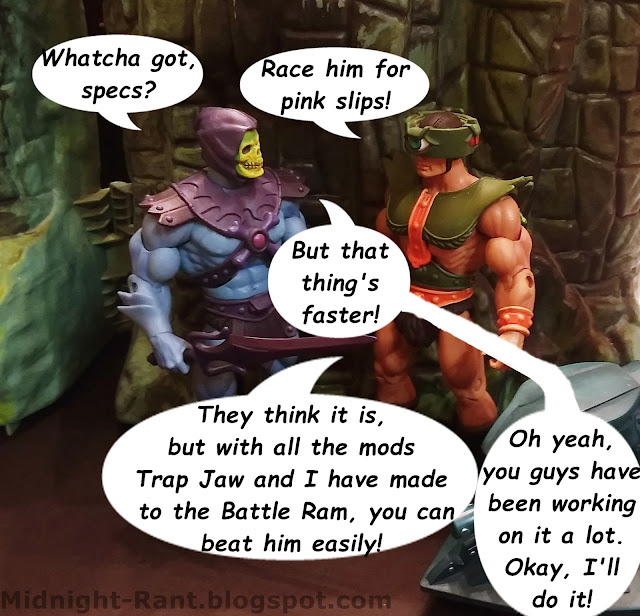 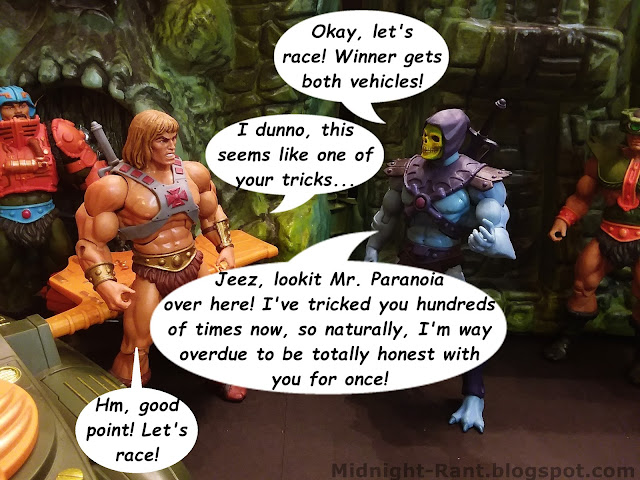 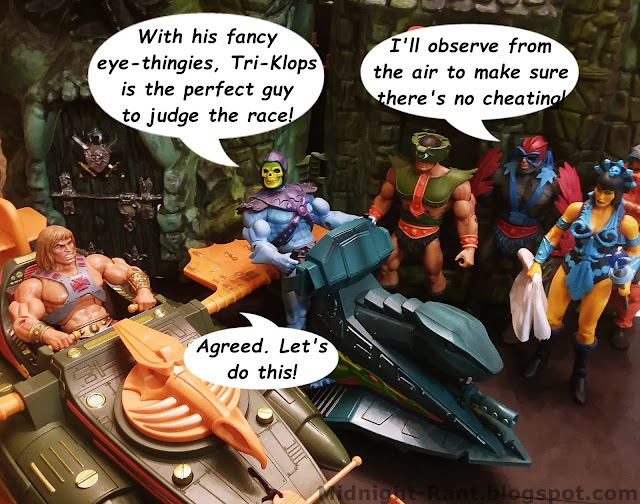 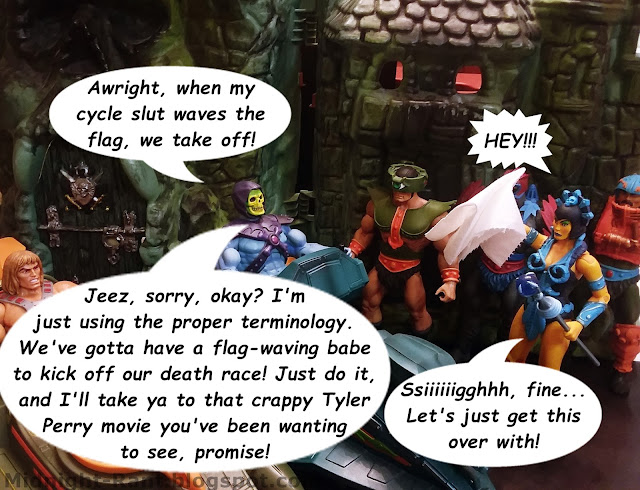 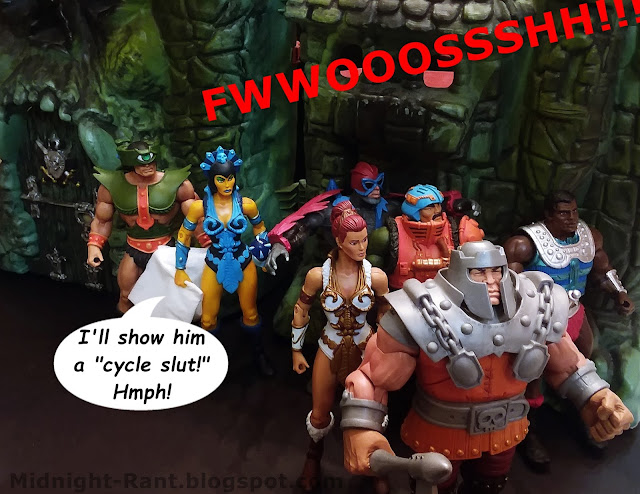 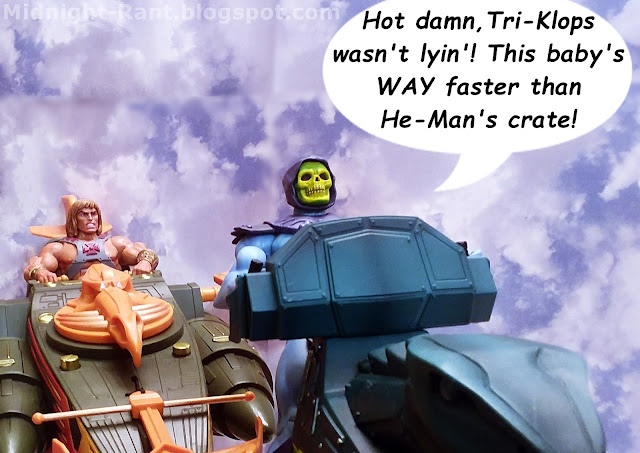 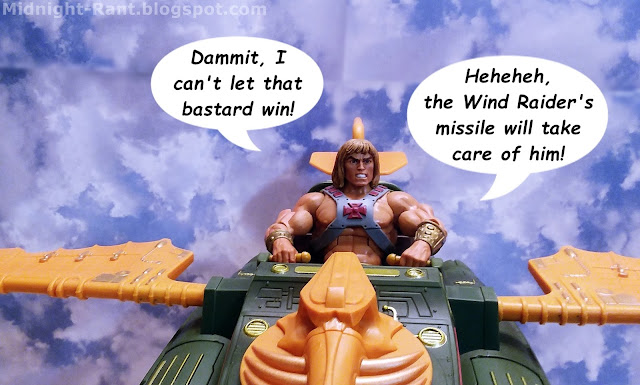 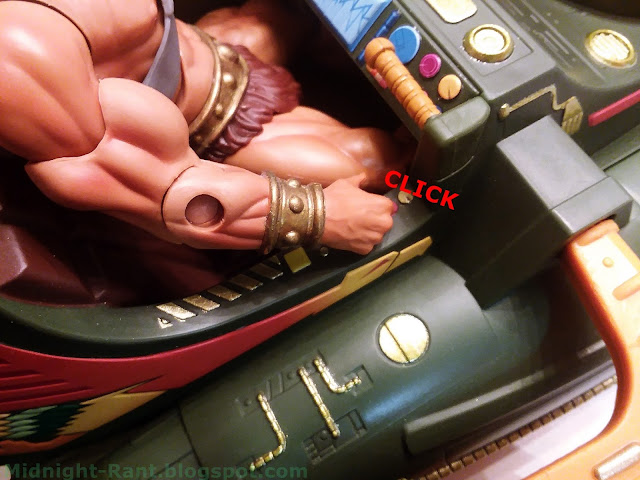 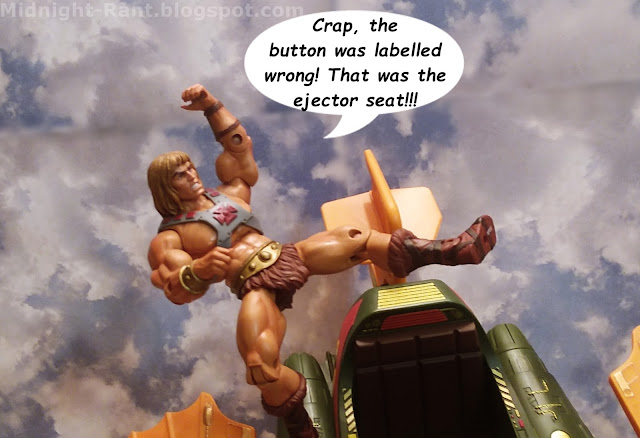 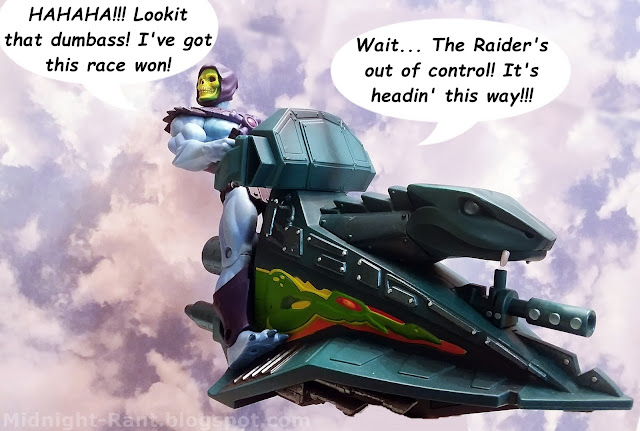 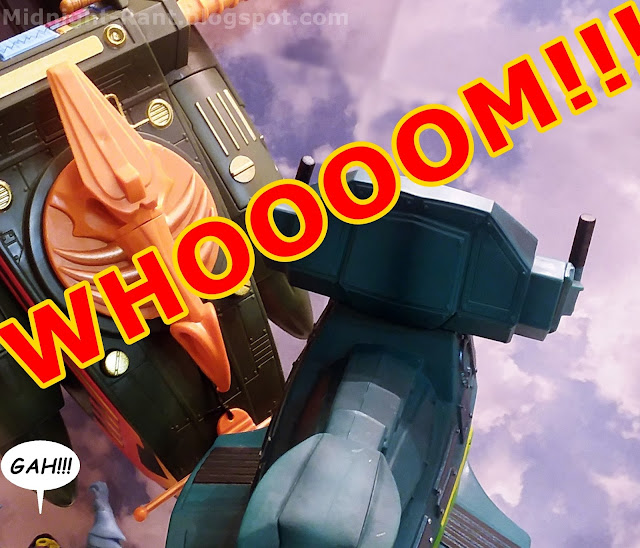 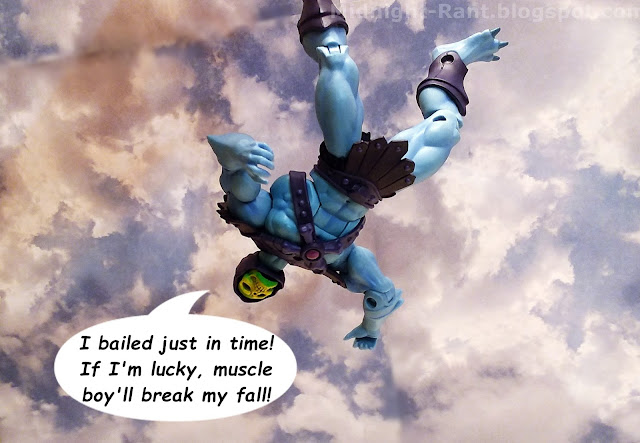 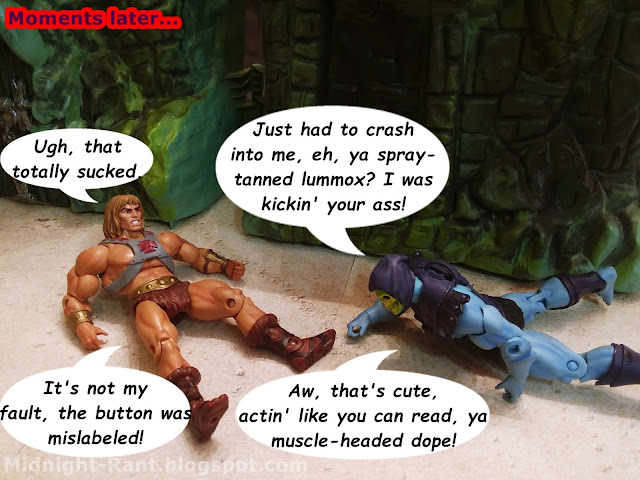 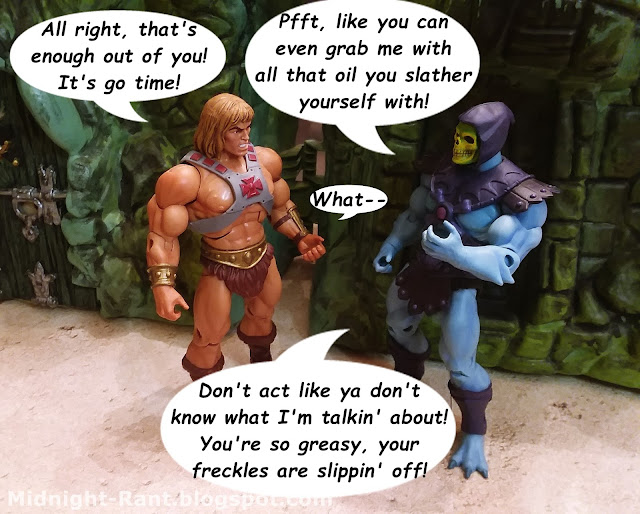 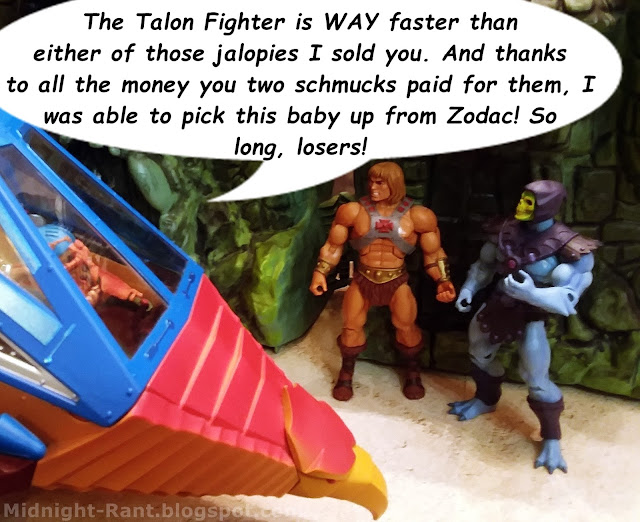 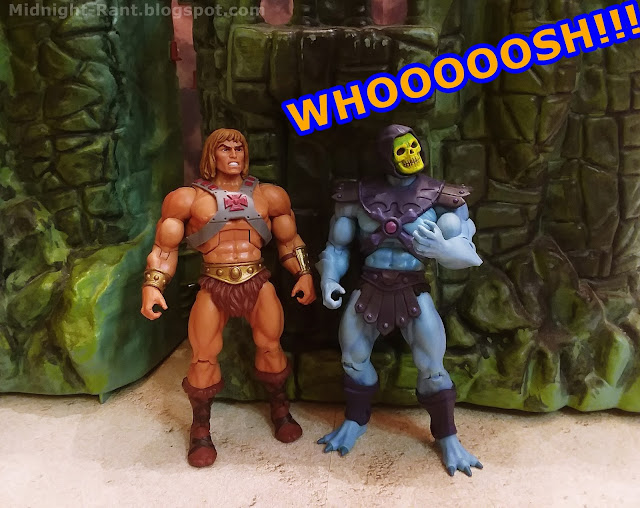 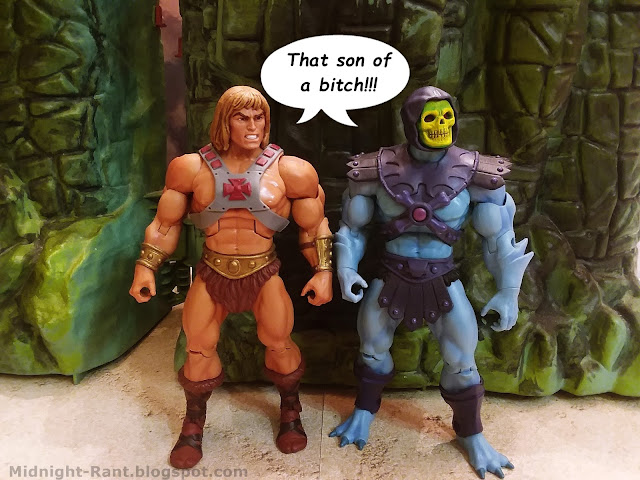 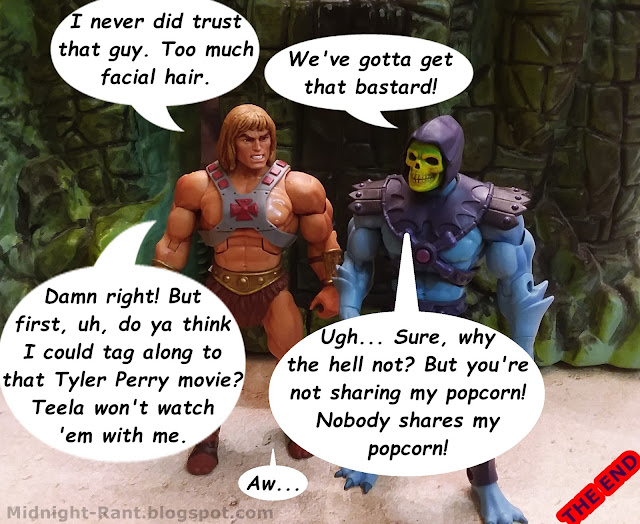