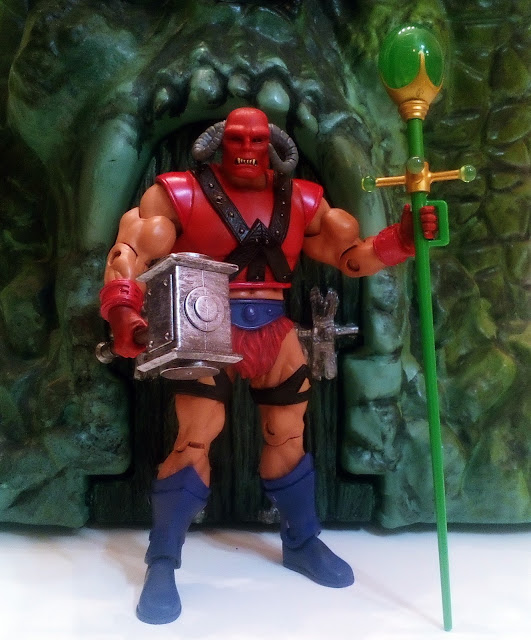 Fandom is a funny thing. No matter what franchise you look at, be it a movie, TV series, comic book, toyline, or, in this case, all of the above, people will become fascinated with some of the most random and obscure characters. Case in point: Goat Man. This character appeared for a few pages in a single MOTU storybook (featuring art by the late, great Eduardo Barreto) in the '80s, and honestly, he didn't do much of anything. Yet, for whatever reason, people have been clamoring for a Goat Man figure for years. He wasn't as fan-demanded in the MOTUC line as even the C-listers who had figures in the vintage line, of course, but there were enough people who wanted a Goat Man figure that he maintained a perpetual presence on "most wanted" lists. I certainly wanted a toy of him when I was a kid. His appearance was in one of the few MOTU Golden Books I owned, and he just popped up as if he had always been a part of this world. I assumed he also appeared in other books, or even cartoon episodes, that I'd missed, and figured we get a Goat Man toy at some point. Sadly, in the original MOTU line, it was not to be. I liked him enough that I even customized a Goat Man figure for the 2002 MOTU toyline. 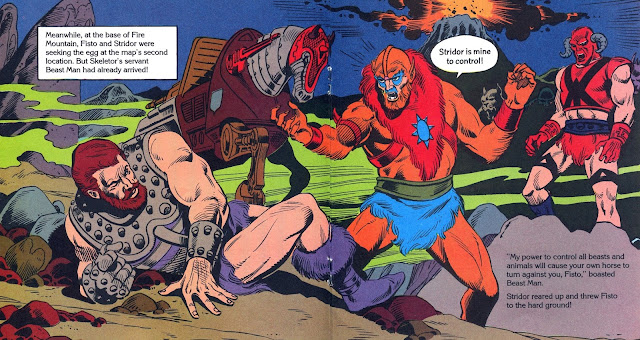 Now that we finally do have a Goat Man figure, another hole in the line has been filled. This is yet another figure that shows how well the MOTUC buck system works, as the Four Horsemen have created a very cool and book-accurate figure with only a few new parts. Mattel could have cheaped out and used the standard bracers, and frankly, it would have worked fine, but it's nice to see them include new ones to make the figure as accurate as possible. The black straps have a nice leathery texture sculpted into them, and the head sculpt has a lot of character. It's one of those sculpts that can seem to have a completely different expression if you view it from different angles, and those are always nice to get. Goat Man can look pissed off, dismayed, or completely befuddled depending on how you look at him. 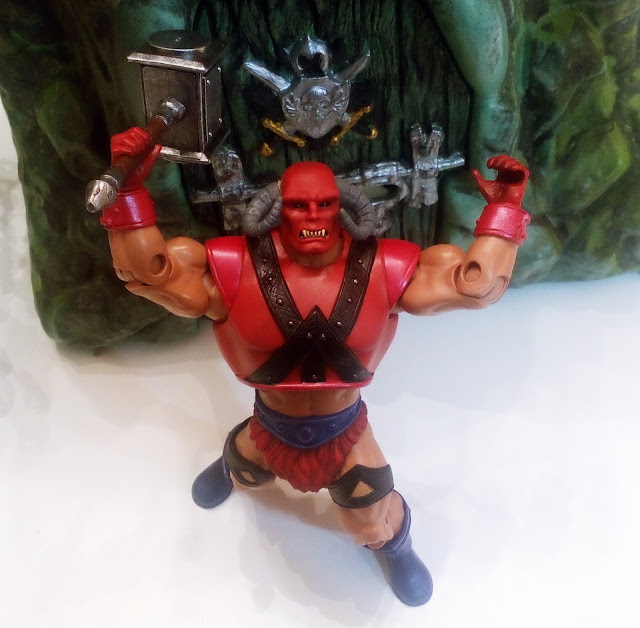 Articulation is standard, though the figure has the "fat armor" issue that became depressingly common in many figures, so, like Ralphie's little brother,  he can't put his arms all the way down. The armor doesn't inhibit the abdominal hinge much, though, which is nice. The ankles on my Goat Man are very loose, which makes it difficult for him to hold certain poses. Paint apps are pretty basic, but they're neat, especially where they matter most, on the eyes and teeth. 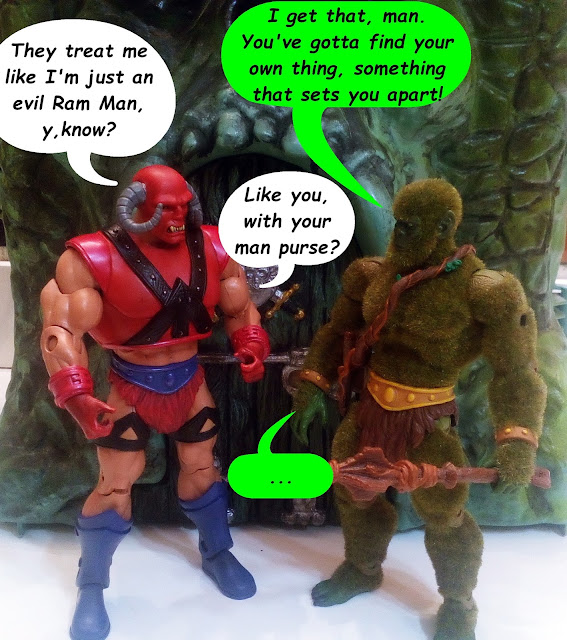 Goat Man includes two accessories, though only one of them is intended for him. He has a huge badass hammer, which has a cool sculpt and a nice paint wash over it. The other accessory is the long-awaited Staff of Avion, so Stratos finally has something to hold. If he could hold anything, that is. Thankfully, the 4H sculpted a bracket around the handle, so that it can fit around either of Chinstrap's open hands. 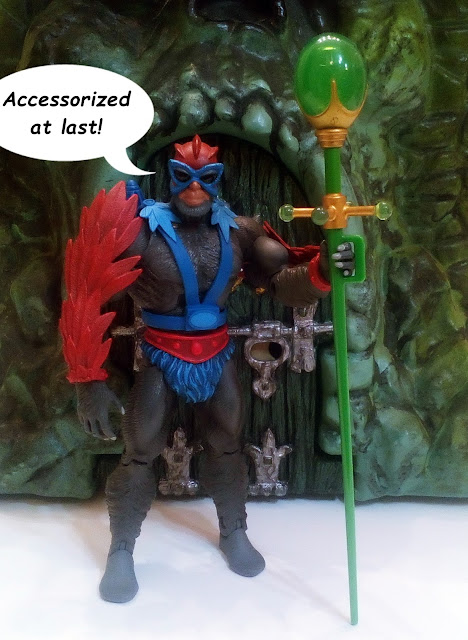 Goat Man is about as far from essential as you can get when it comes to MOTU characters, and that's largely why I love this figure as much as I do. After several false starts, and years of canned "Stay Tuned!" responses that never seemed to lead anywhere, the fact that we finally have a MOTU toyline that is so expansive fills me with glee. Mattel and the 4H took an obscure, single-appearance character and knocked him out of the park with this figure. Many, perhaps most, MOTU fans won't consider him a "must have" figure, but if you like the oddballs, as I do, you'll wanna grab him for your collection. 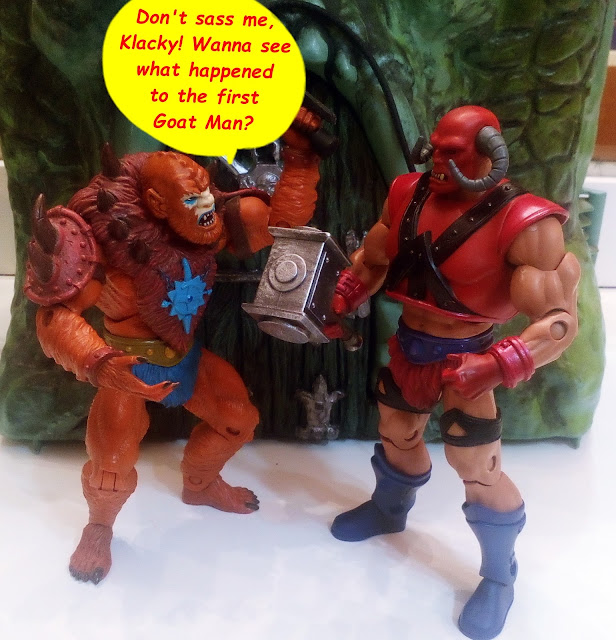 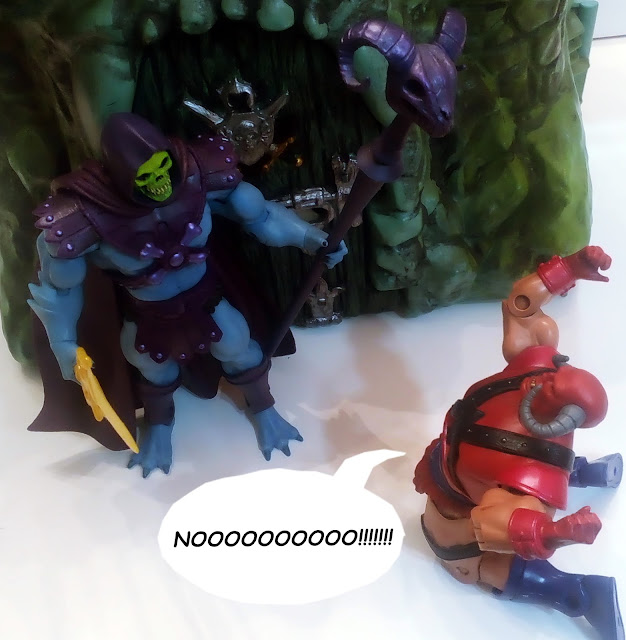