I toldja this would be a big one! When the LEGO Group announced that they would be producing a set based on the iconic Simpsons house, excitement spread like wildfire across the internet, and the widespread appeal of the Simpsons brought it a great deal more attention than a LEGO set typically receives. When the set was unveiled, many were quick to hail it as the greatest LEGO set ever produced. Does it lay claim to that lofty title? You'll have to wait until the end of the article to see! (Or, y'know, scroll down to the bottom, if you're the impatient sort.)

As a hardcore Simpsons fan who has been watching since the Tracey Ullman Show days, I knew I would be getting this set. At 2,523 pieces, it is the largest LEGO set that I own by a fairly significant margin. (The next largest one I own is the Haunted House, which clocks in at 2,064 pieces.) I milked it for all it was worth; eschewing the numbered bags that are designed to make the build quicker and easier, I dumped them all into a bin, put on some classic Simpsons episodes, and spent the next three days building this beast. (My estimate for the total build time is about fifteen hours. If that sounds too daunting, you could easily knock off a few if you used the numbered bags. I don't get to enjoy a massive build like this too often, so I wanted to string it out.) I documented the build fairly extensively, so for now, I'll let a selection of those photos do the talking. 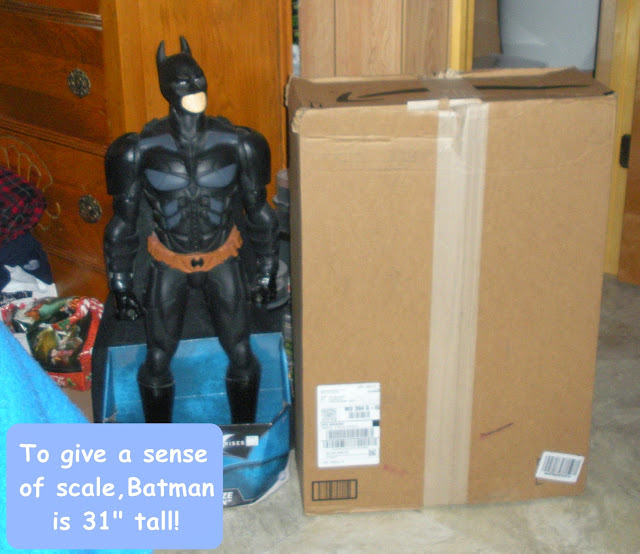 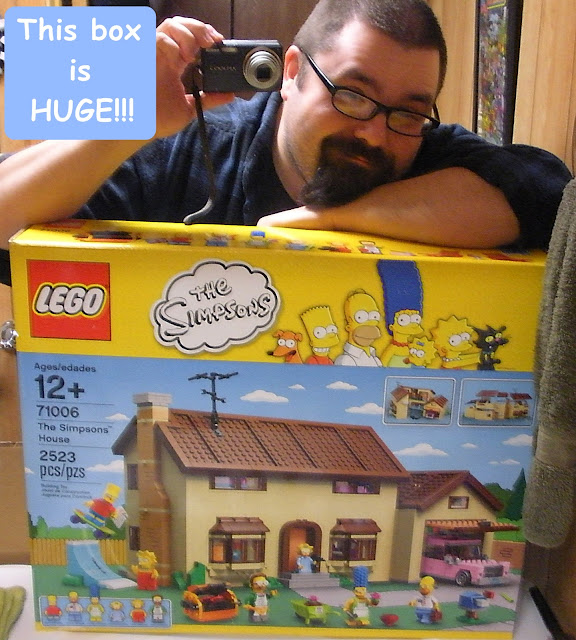 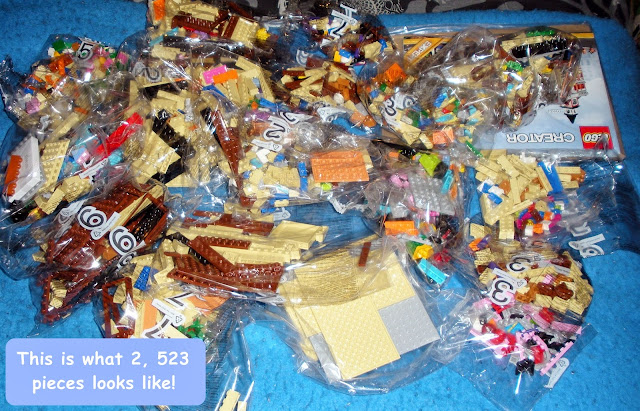 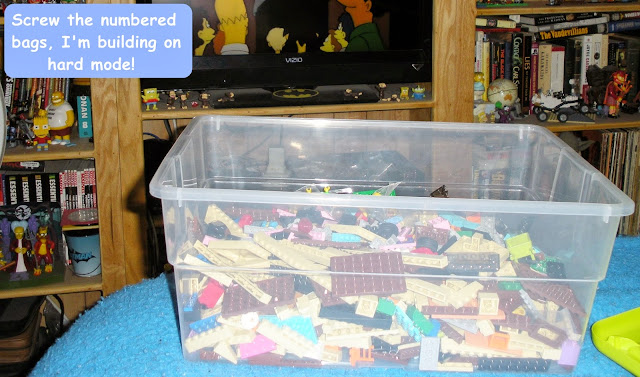 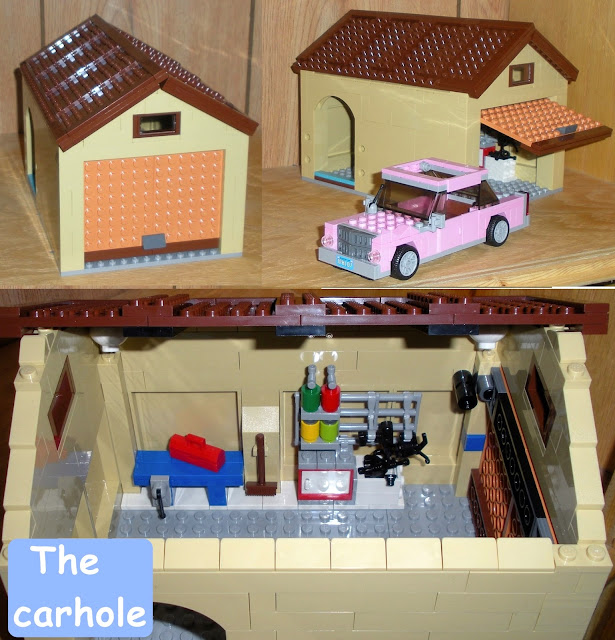 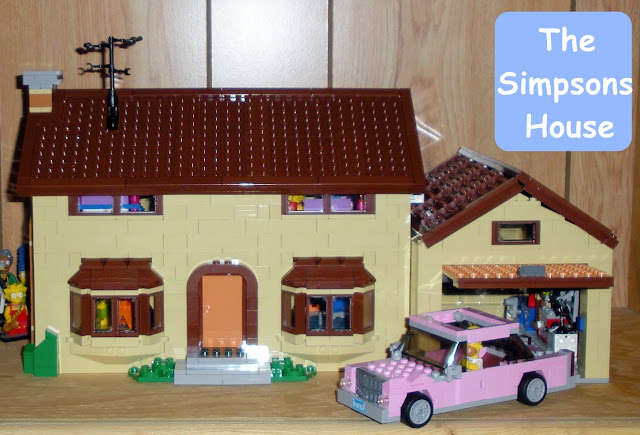 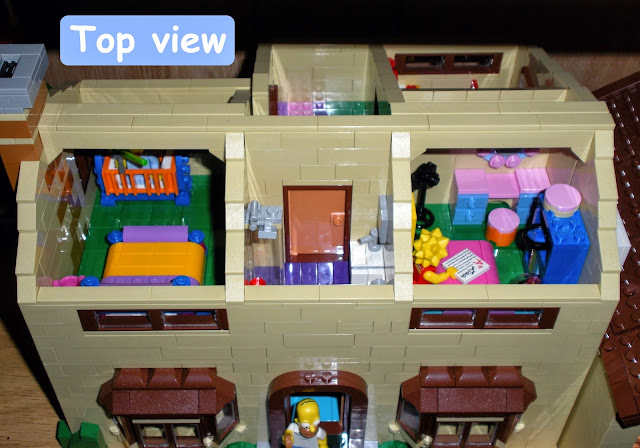 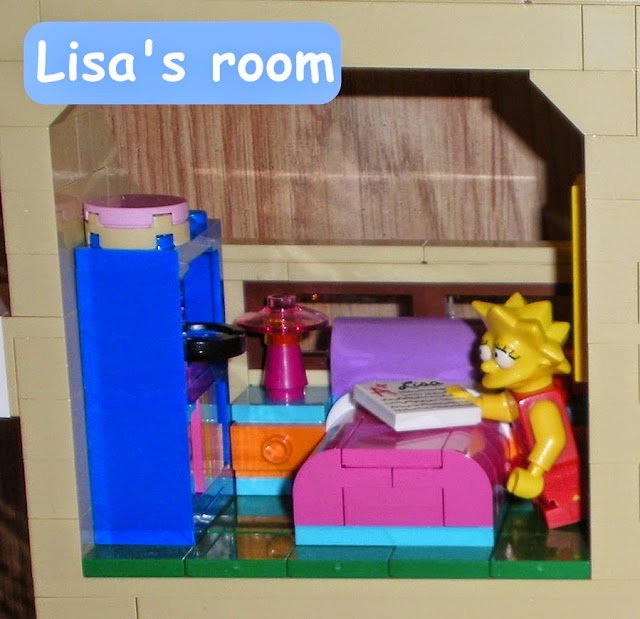 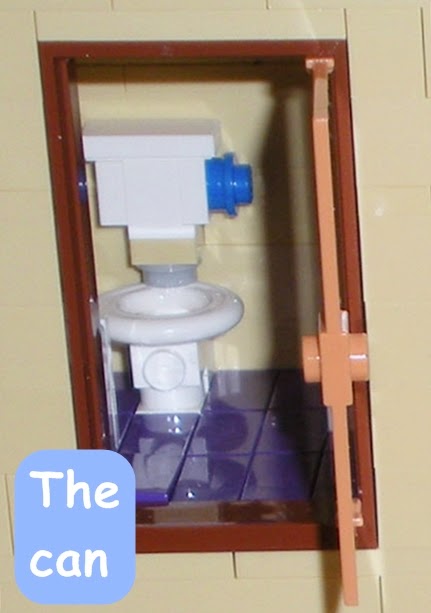 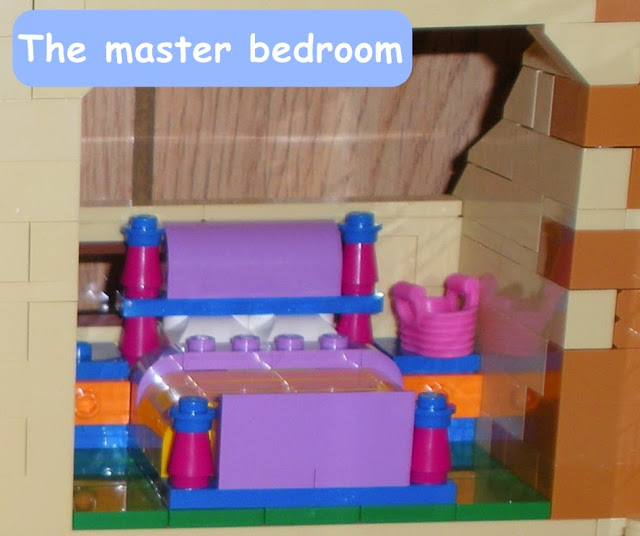 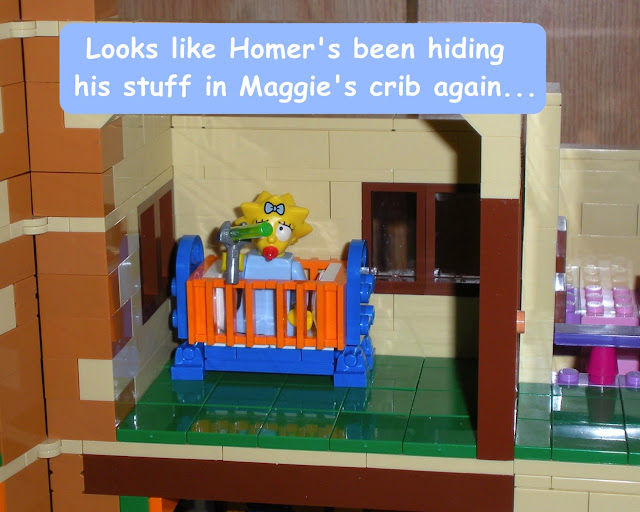 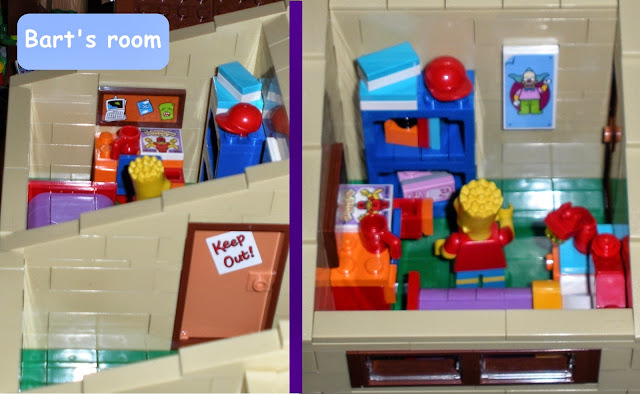 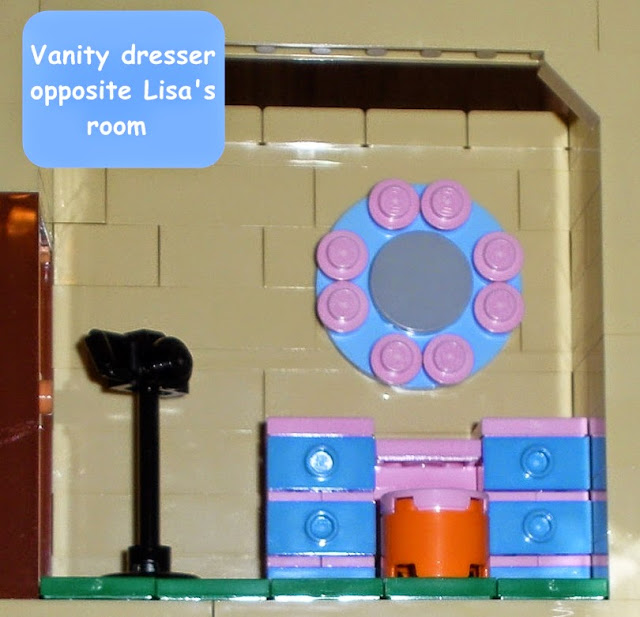 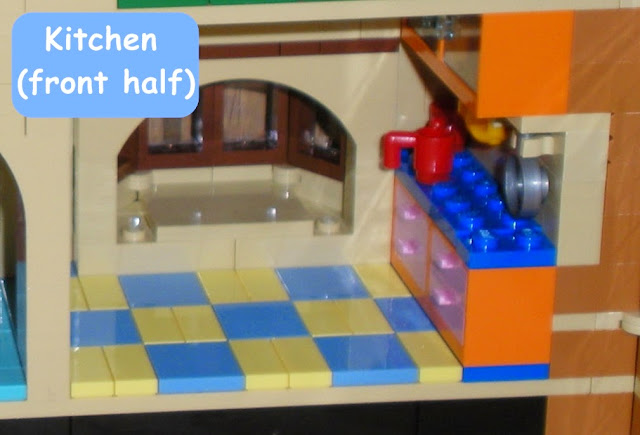 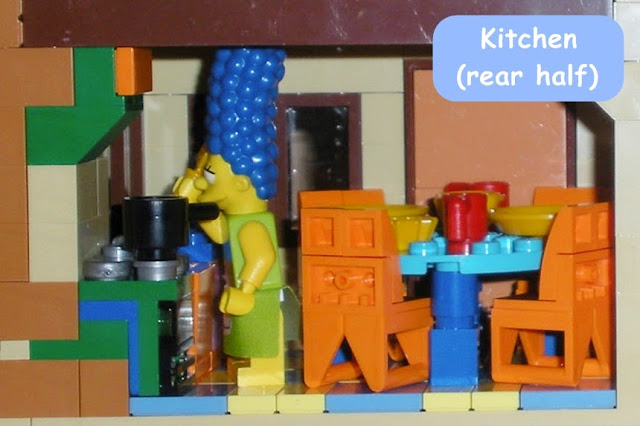 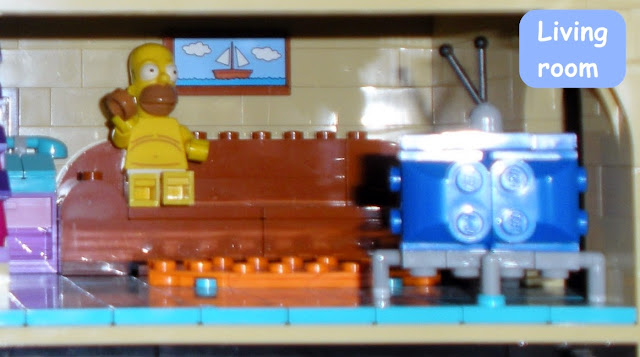 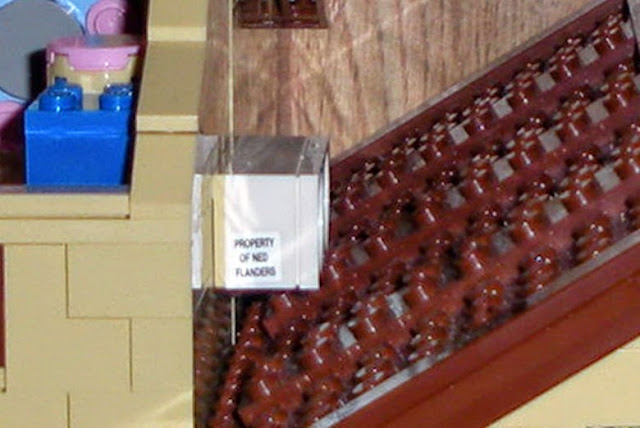 Impressive, eh? It's difficult to get the size of the set across in the photos; it really is quite large. Devoted Simpsons fans will immediately notice that the interior layout is not 100% show-accurate; unfortunately, the realities of toy production mean that making the house larger and more accurate would have resulted in a set that was easily twice as expensive, and $200 is really pushing it as it is. All the most important rooms are present, though the scale can seem a bit small at times. The kitchen is particularly crowded. It must also be noted that the layout is not consistent on the show itself-- note, for example, the magic door in the kitchen that leads to various places depending on the needs of the episode in question-- so it's tough to hold any inaccuracies against this set. 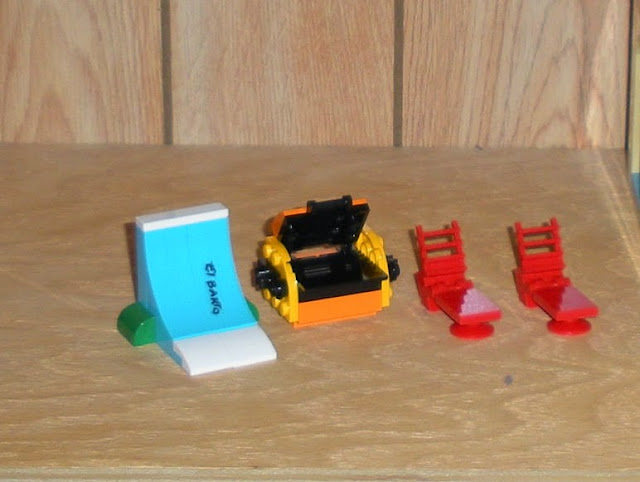 Once you get past that, you can appreciate the amazing detail in the set. Things like the workbench and tool set in the garage, the dented fender on Homer's car, the posters and comics scattered around Bart's room, the vacuum cleaner tucked into an alcove behind the staircase, and the “Property of Ned Flanders” labels on the various items Homer has “borrowed” over the years propel a great set into truly legendary territory. (The newly-released Kwik-E-Mart appears to double down on this!) 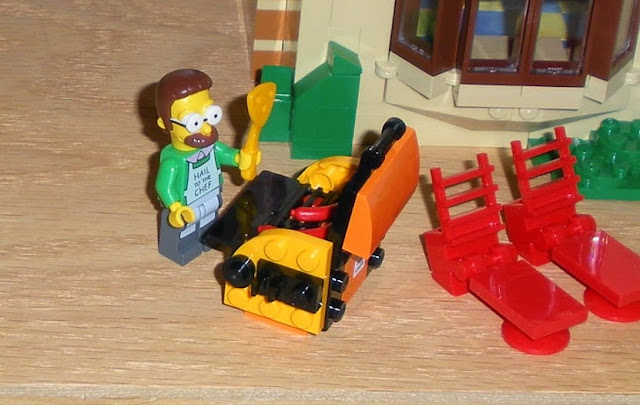 Most of the issues I have with the set are related to the minifigures that are included. Obviously, including the family is a no-brainer, and Ned Flanders is a similarly obvious inclusion. However, the family has a sleepy/stoned appearance that just makes them look odd, with the exception of Maggie. (I have the Collectible Minifigure Series Maggie displayed inside my house; the one included with the house is identical, but has normal wide-open eyes.) It's understandable that TLG felt the needed to differentiate these minifigs from the ones included in the CMF series, but one would think that such details as Homer's tie and Marge's apron were enough. As things are, anyone who buys this set and skips or cannot find the CMF versions will be stuck with less desirable versions of most of the family, and that's a bit of a bummer. Maggie is fine, as noted, and Flanders is okily-dokily. 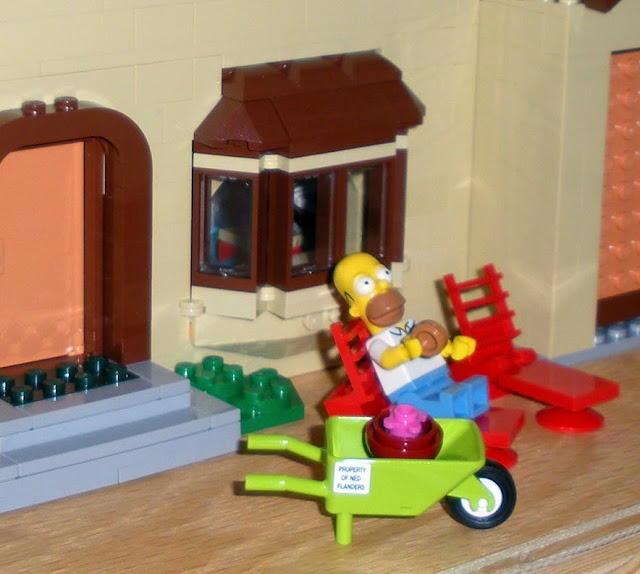 Another drawback is the absence of the family pets. (At least they are now available in the Simpsons CMF series two, but it honestly kinda sucks that we have to buy another Lisa and Maggie to get Santa's Little Helper and Snowball II. Lisa is a neat variant, but Maggie is exactly the same.) It should also be noted that the floors are completely covered with tiles, making it tough to get minifigs to stay in place. This can be easily fixed by simply popping off a tile so you can lock a minifig's feet in place, so it's not a big deal. On the contrary, the tiled floors look sharp, and I'm glad TLG made the decision to do them like that.

This set is definitely greater than the sum of its parts; its drawbacks are few, and its positives are innumerable. So, is it the greatest LEGO set ever produced? In my opinion, it is not, though it is a solid top ten, possibly even top five, contender. That said, putting aside all objectivity, it is my second-favorite set of all time. (For the record, my all-time favorite LEGO set remains the Haunted House.) It's a must-have for hardcore Simpsons fans and lovers of great LEGO sets alike. I feel this is destined to become one of those “holy grail” sets in the years to come, so if you're interested, better get one while you can! (It is currently out of stock on the official LEGO Shop website, but they are expecting more, and it's currently instock at Amazon.com. Don't pay ridiculous scalper prices if you can help it.) Hope you enjoyed this in-depth look at one of the coolest Simpsons collectibles out there, and if you missed any Simpstravaganza articles, you can catch up right here. Enjoy the season finale Sunday, and I'll see you all next time!
Posted by Waylon Piercy at 11:00 AM

Email ThisBlogThis!Share to TwitterShare to FacebookShare to Pinterest
Labels: LEGO, Simpstravaganza, The Simpsons