I'm back with my reviews and grope guide for the second half of Lego CMF series 13! If you missed the first part, you can find it here. 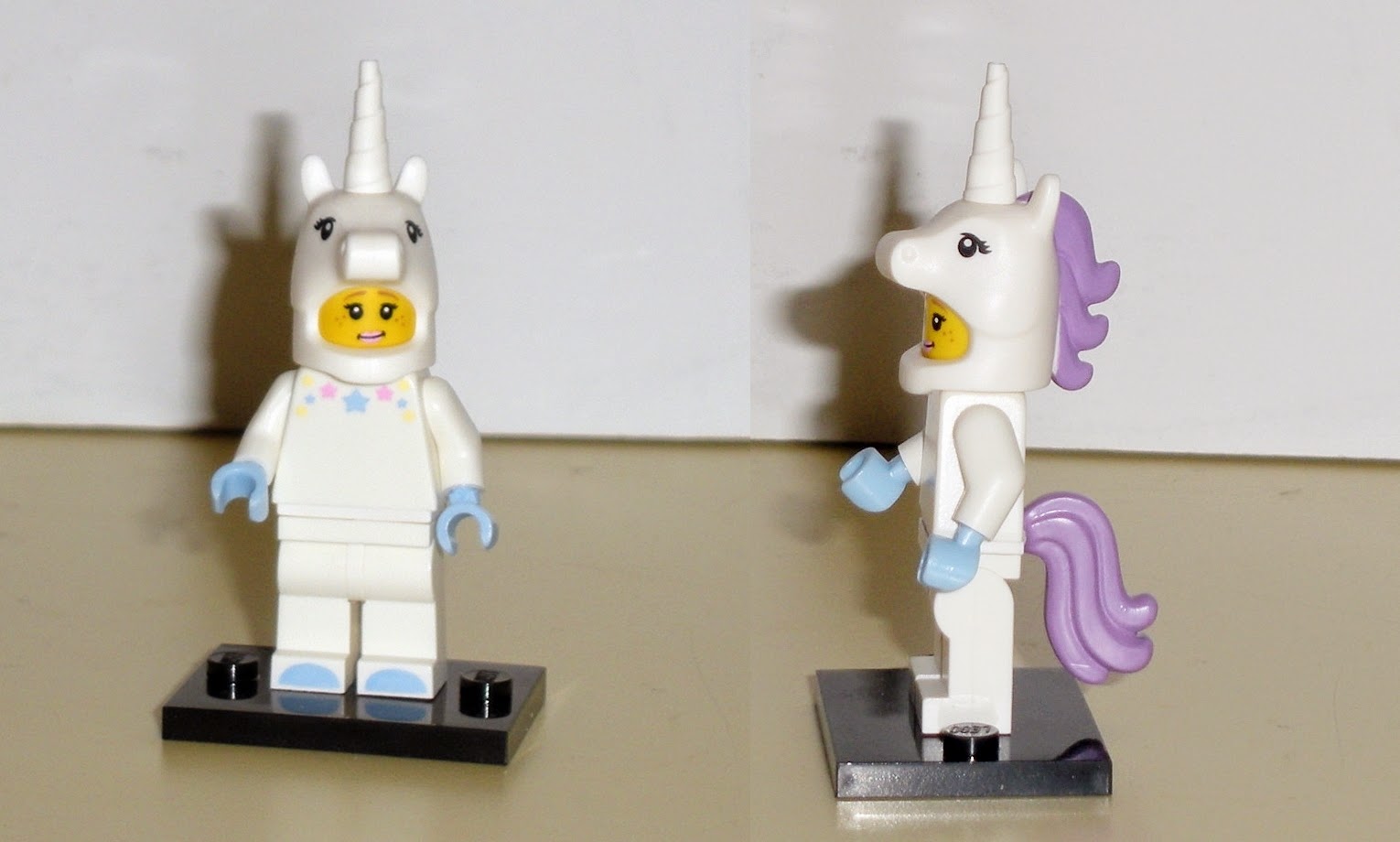 The Unicorn Girl continues the sub-set of people dressed in animal costumes. (Given Lego's habit of releasing opposite gender counterparts in the CMF line, can an Equesticle in a horse costume be far away?) Unicorn Girl has a clean white outfit with blue "hooves," a lavender mane, and matching tail. The tail was a nice surprise, as it was not visible in the promo photos I'd seen of UG. There's a nice star pattern on the costume's chest, and she has some cute little freckles on her cheeks. UG as a whole is simply adorable, and as a shortpacked female minifig who is also part of a popular subset, she's sure to be one of the harder ones to find the longer this series is on store shelves, so get her while you can!
Groping guide: With three pieces that are unique to her in this series, UG is fairly easy to find. The tail piece is easy to find, but it can be unclear what it is if you haven't felt such a part through the foil before. Her helmet is also pretty distinctive, though it too can be tough to identify within the package. The horn is a separate piece, so find it for confirmation if you're not certain. She's packed at only 3 per case, so if you're on the fence about her, my advice is to grab her if you find her. You can always sell or trade her later, and she'll never be worth less than the $4 you'll pay for her right now. 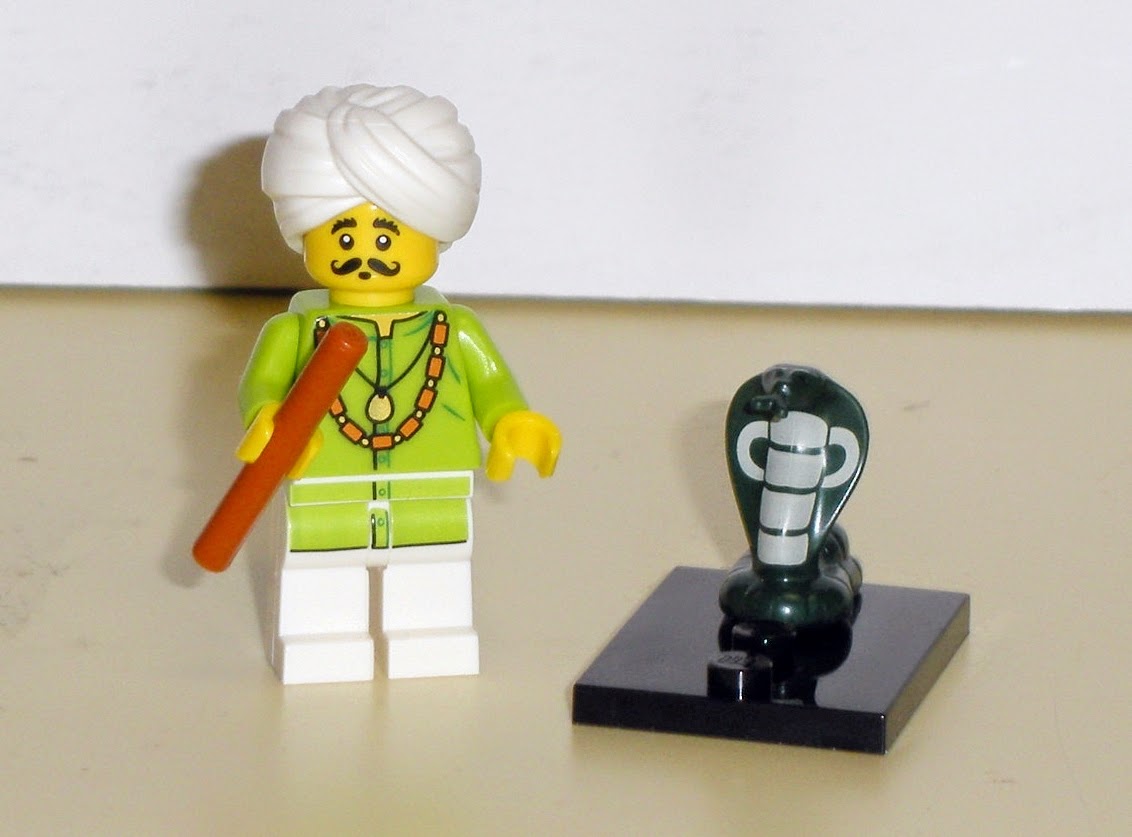 The Snake Charmer is a very fun minifig. It's always nice to get a character that is part of another culture, and this one is very well executed. He has a very suave curly mustache, and his torso has some nice printing with a gold medallion and a beaded necklace over his shirt. His turban fits snugly on his head, and there is leg printing so that his shirt hangs well below his waist, just as a kurta (thank you, Bing search) should. He has a thin brown rod to represent his flute, and to prove that he's not just one of the numerous posers who pretend to be snake charmers just to get chicks, he has a very large snake. (No double-entendres here, you perverts.) The cobra has some nice printed decorative coloring front and back, and fits nicely over two studs. It should be noted that the cobra is made from a softer rubbery plastic, much like the heads on last year's Itchy and Scratchy minifigs. This doesn't bother me, but I know there are a lot of people who really detest the use of this material, so keep that in mind. Regardless of how one feels about that, the snake charmer is a great minifig that should have a home in any Lego minifig collection.
Groping guide: The turban is easily confused with a couple of other pieces of headgear in this series, so try to find the flute and the cobra. The cobra might be a little tough to identify, so if you think you have one, use the flute for confirmation. The snake charmer is packed at 4 per case, so he shouldn't be too tough to get.

The Samurai is another opposite-gender counterpart to an earlier CMF, series 3's samurai. (I don't actually have the earlier samurai, so I snagged a photo from an image search for comparison purposes.) I like the newer samurai quite a bit more, as the armor detailing is far better. She also has a nice kimono print underneath, so you can display yours without her armor just as well. She has the same hairpiece as series 3's Sumo wrestler, and a pair of katanas. She's a really cool minifig, and if I have one small gripe, it's the lack of anywhere to store her swords when she's not holding them. Like i said, though, that's a minor thing.
Groping guide: Between her unique (to this series) armor and katanas, the samurai is one of the easier minifigs to find in this batch. Like all the females in this set, she's packed at 3 per case. she seems to be getting overlooked while everyone scrambles to amass HDS guys and unicorn girls, but it wouldn't surprise me if the army builders wind up making her a bit more scarce as this series spends more time on store shelves. 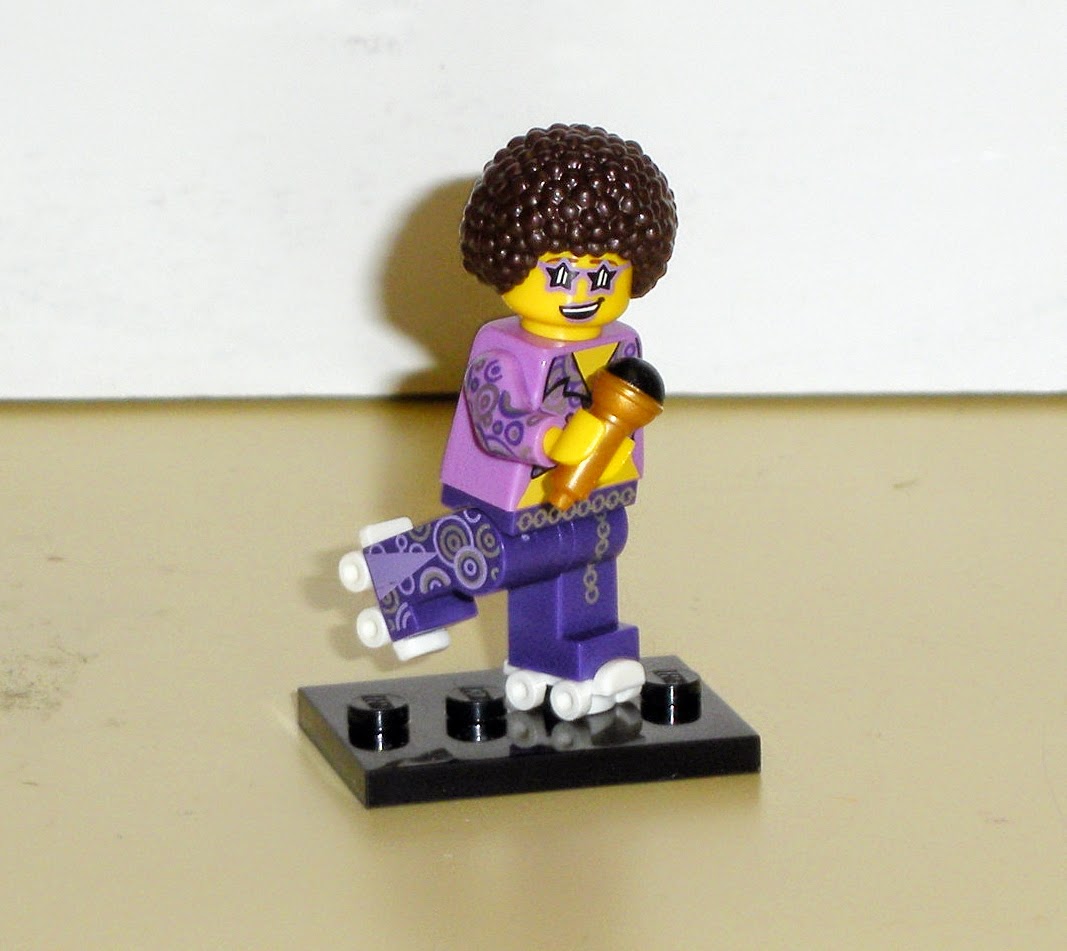 Bust out the Donna Summer and Bee Gees LPs and hang the mirrorball, 'cause the Disco Diva is here! Yet another callback to an earlier CMF, the disco diva will pair up nicely with series 2's disco dude. The diva improves on the earlier minifig in every way, however, with an eye-catching color scheme and one of the most complex printing patterns I've seen in recent memory. Unusual for the CMFs, she has leg printing for her silver chain belt and the design on her pants, and back and arm printing for the pattern on her shirt. The side leg printing even has a cutaway printed to indicate that these are bell bottoms! Lego really went above and beyond for this minifig, and she's all the better for it. Throw in her afro, microphone, and roller skates, and you've got one of the stars of this series. 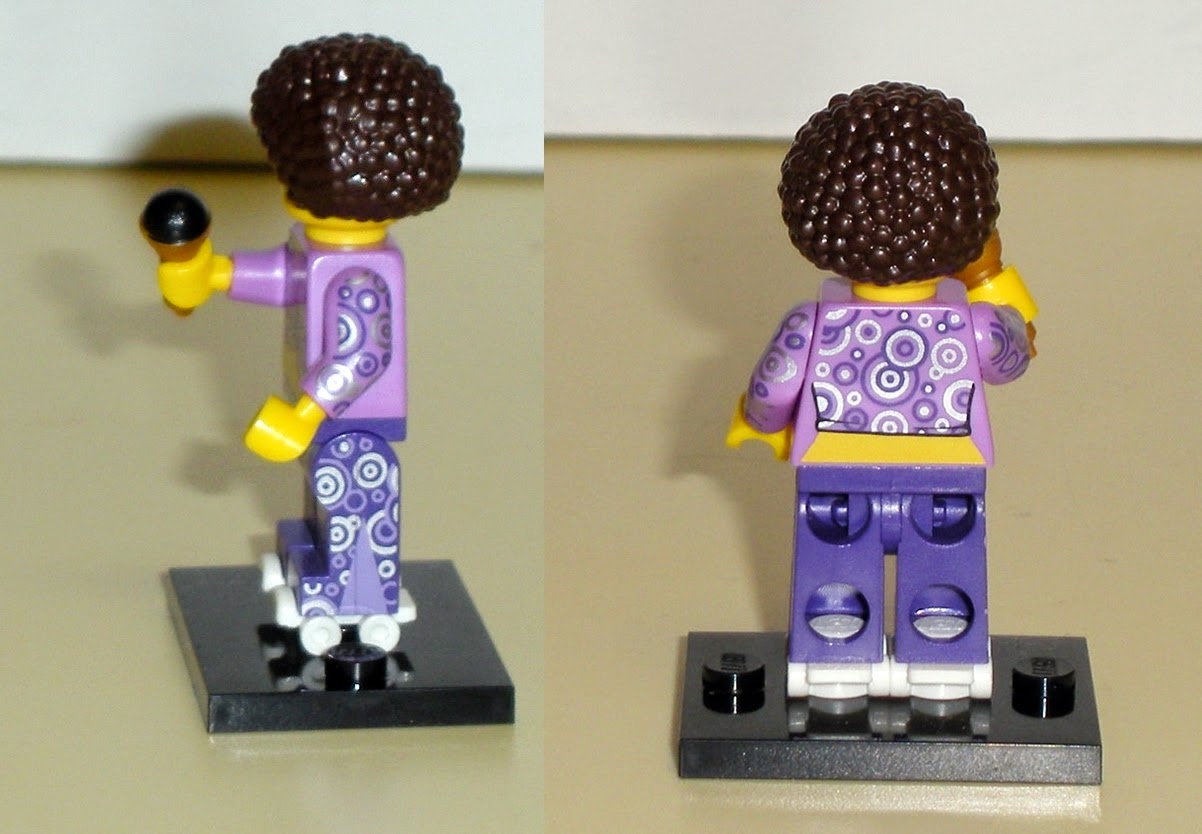 Groping guide: The texture on her afro is easy to feel right through the packaging. The mike and skates are tiny and tough to find through the bag, but with a little patience, you can find one of them if you need confirmation beyond the 'fro. She's packed at 3 per case, and seems to be middle of the pack as far as how quickly she disappears from a case. 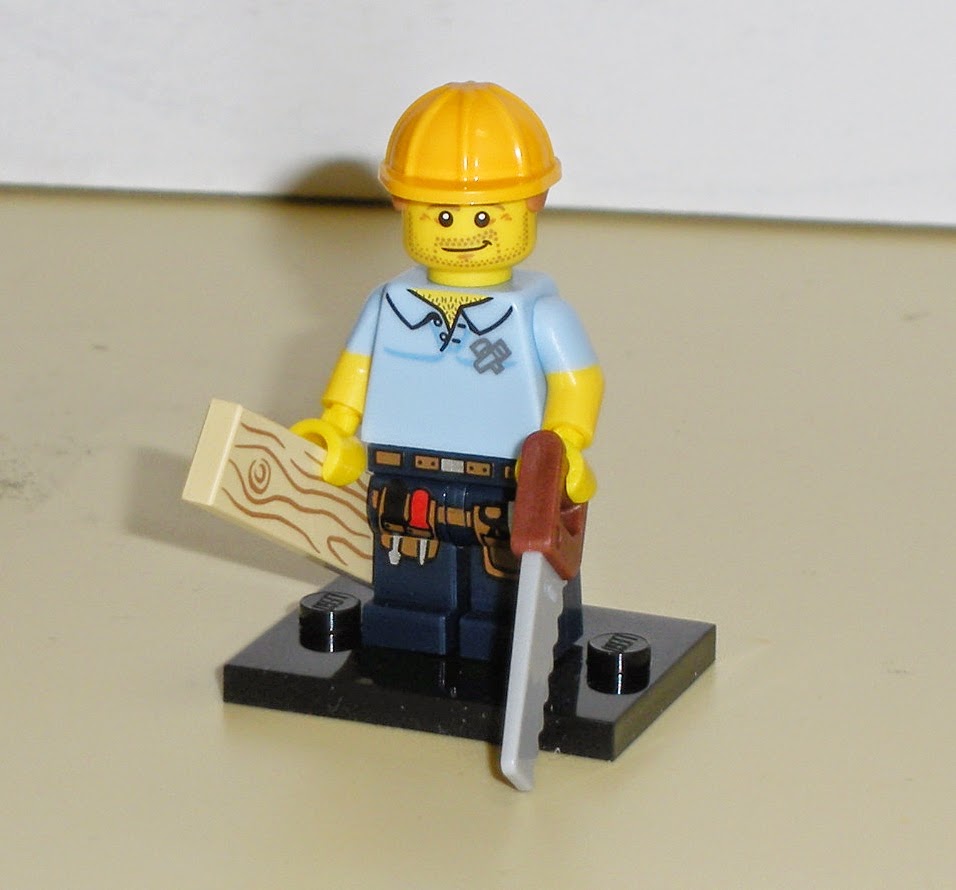 Sure to become a mainstay in city displays everywhere, the Carpenter is an excellent minifig that, in retrospect, has been a long time coming. Seriously, with all the construction sets out there, I don't recall ever seeing an actual carpenter minifig. There probably has been one or more, but it doesn't seem to have been a common inclusion in those sets. He's got some nice face printing with light stubble and some crow's feet, a company logo on his shirt with some chest hair peeking out, and a really cool tool belt on his waist and legs. He comes with the requisite hard hat(with hair attached), saw, and board. That such a well-designed minifig has been overlooked is a testament to how strong this series truly is. If only he had a walrus companion. (As a side note, my dad is a carpenter, and I'm tempted to hunt down a white Santa beard and put it on this fella to have a minifig of my dad! It would be a pretty accurate representation.)
Groping guide: The saw and the board are very easy to find and identify. This guy is packed at 5 per case, so he's very easy to come across. He's the swashbuckler of this series. 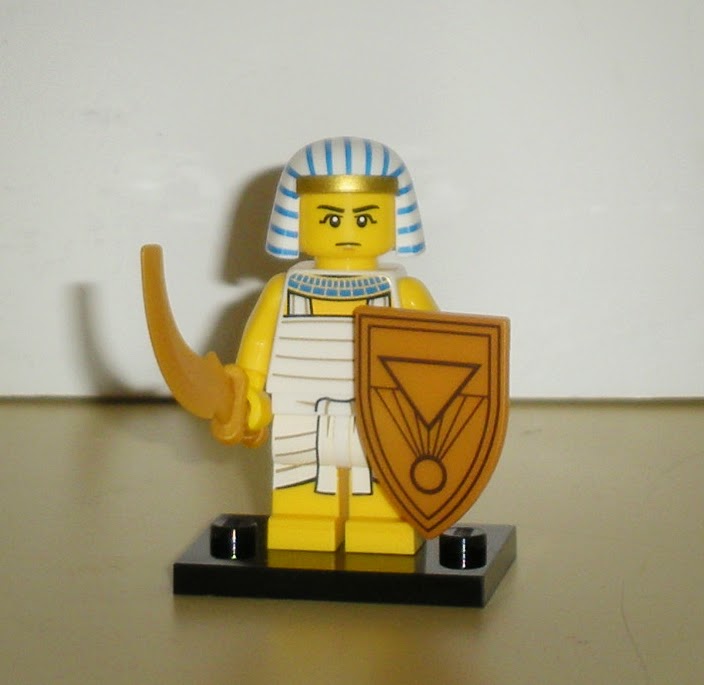 The Egyptian Warrior will pair up nicely with either series 2's pharaoh or series 5's Egyptian queen. He has some nice detail on his torso and legs. (It's worth noting that the front and back of his torso have identical printing. This doesn't really impact the figure in any way, it's just kinda interesting.) He's got the requisite eye makeup, as well. His headdress, sword, and shield are all appropriate for the Egyptian theme, and it makes for a nice overall presentation. This isn't one of my favorites from this series, but it's a nice minifig, and a very good army builder for people who are into that. (By the way, I realized after I added the photos that I had his shield upside down. No need to point that out.)
Groping guide: His sword is unique, but there are a lot of swords in this series, so your safest bet is to find the shield. It's the only accessory in this series that has that shape, and since it's rather large, it's easy to find in the package. He's packed 4 per case, so you shouldn't have much trouble finding one unless you have some obsessive army builders in your area. 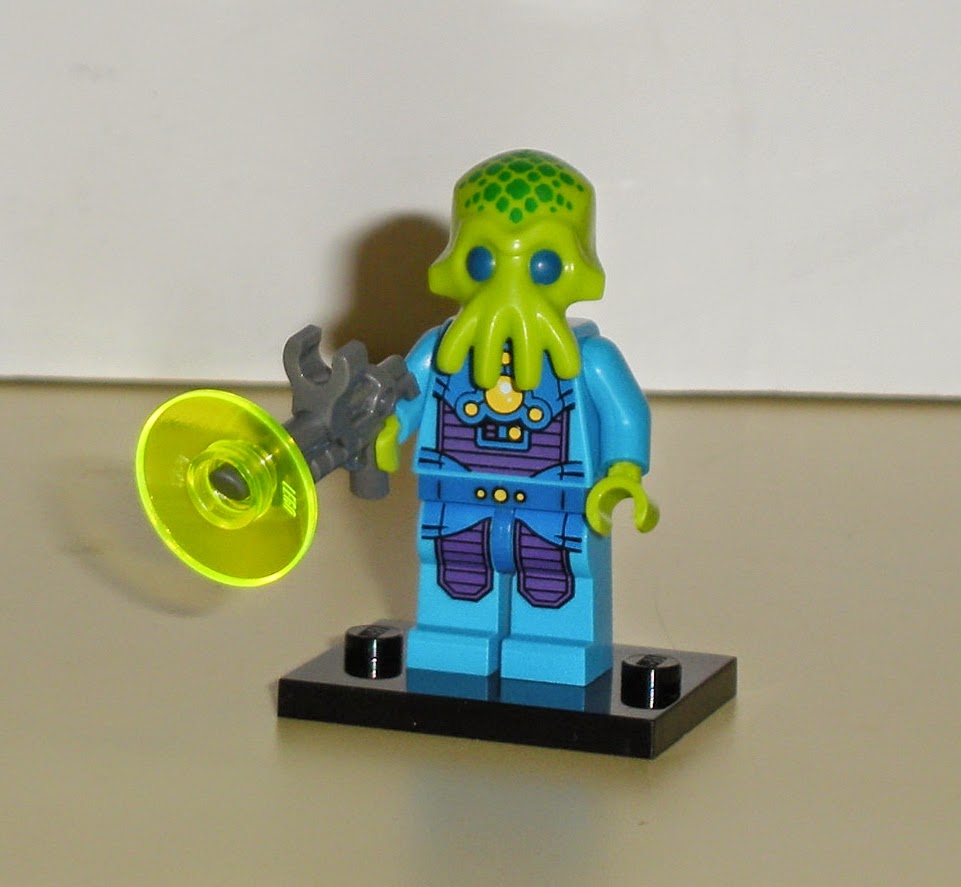 The Alien Trooper is yet another army builder. (This has got to be the army building-est series to date!) It's always nice to get another space-themed minifig, and this guy channels both Zoidberg and Cthulhu to boot! Despite his monstrous influences, he (or is it she?) actually looks pretty friendly, with big round eyes, and a nicely detailed spotted pattern on the head. The uniform has some very nice printing on the front, back, and legs, and the gun has a cool neon green disc attachment(shades of Blacktron!). This is a really cool minifig, and I definitely have the urge to pick up a couple of extras for some customs.
Groping guide: The head is a rubbery sort of material, like Itchy and Scratchy, so it's pretty easy to figure out that you have the alien. You can feel the tentacles through the bag with your fingernail to confirm. Zoidthulhu is packed 4 per case, so he's easy pickings.

All this leaves the Fencer and the Galaxy Trooper as the odd figs out. They were the only minifigs in this series that didn't interest me much, so I never picked them up, and do not plan to. However, I ran across quite a few of them in my searches, so I can provide a groping guide for those of you who want them. For the fencer, his helmet is large and easy to find, but can easily be confused with some of the other large rounded headgear in the series. His rapier, however, is unmistakable, so look for that. He's one of the less common in this series at 3 per case, which is surprising since I came across a horde of them at Target. It seemed like every third minifig was a fencer!
For the galaxy trooper, his helmet, guns, and armor are all unique to him. The armor is the easiest part to identify, so if you find a big hunk of plastic that isn't hot dog-shaped in one of the foil bags, you've got yourself a trooper. He's common at 5 per case, so you should have a pretty easy time finding him(again, unless there are a bunch of army builders in your area).

That wraps it up! Like I said in part one, this is quite possibly the strongest lineup to date, which is really saying something, as that bar is set quite high. Get out there and get 'em while you can! Simpsons series 2 is just a couple of months away, after all! 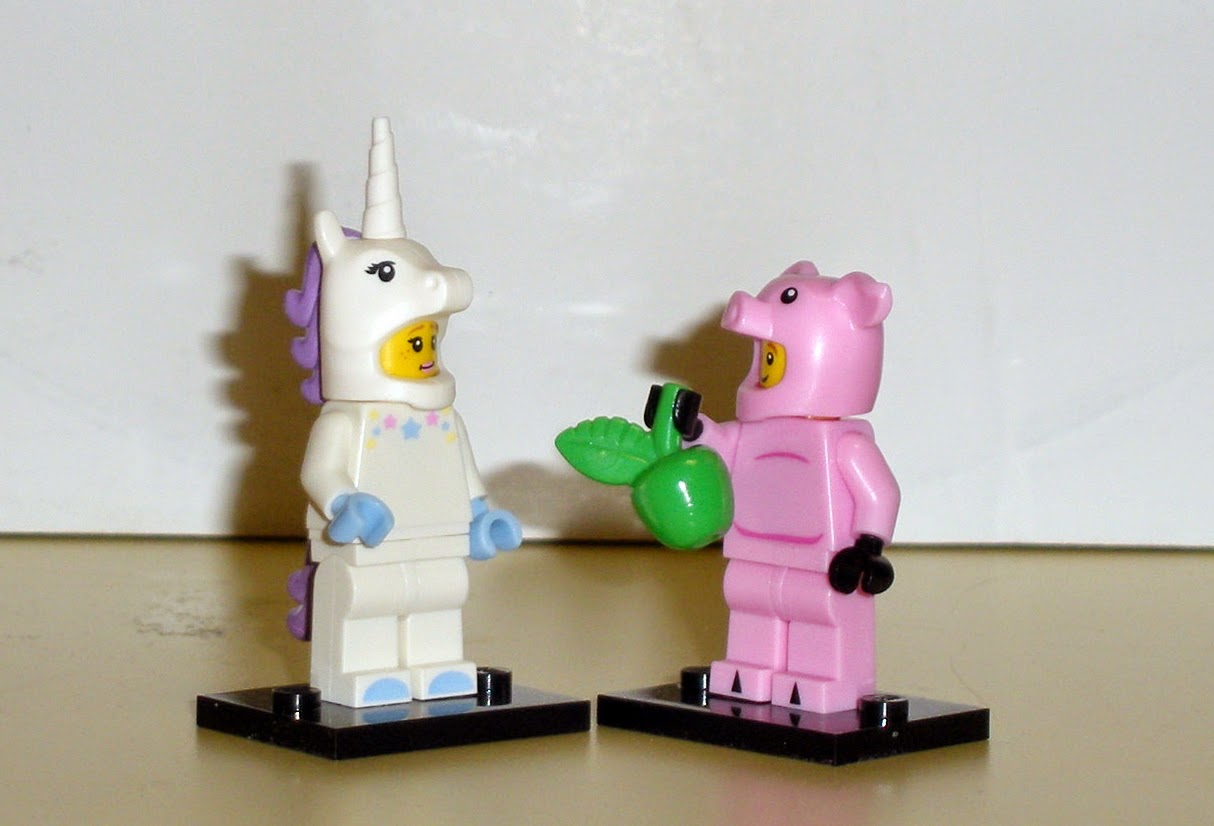