Construction of the Haunted House

I teased you with this last time, and here it is: the MASSIVE and AMAZING Haunted House! At over 2000 pieces, this is far and away the biggest Lego set I've ever owned. Nearly all the ones I had when I was a kid were dinky little $5 sets; I couldn't even dream of getting something like this back then! Cindy wanted to help, so we put on a succession of classic horror movies and spent the next eight hours building!

Here are all the parts! I didn't count exactly how many bags of parts the box contained, but it was around twenty. 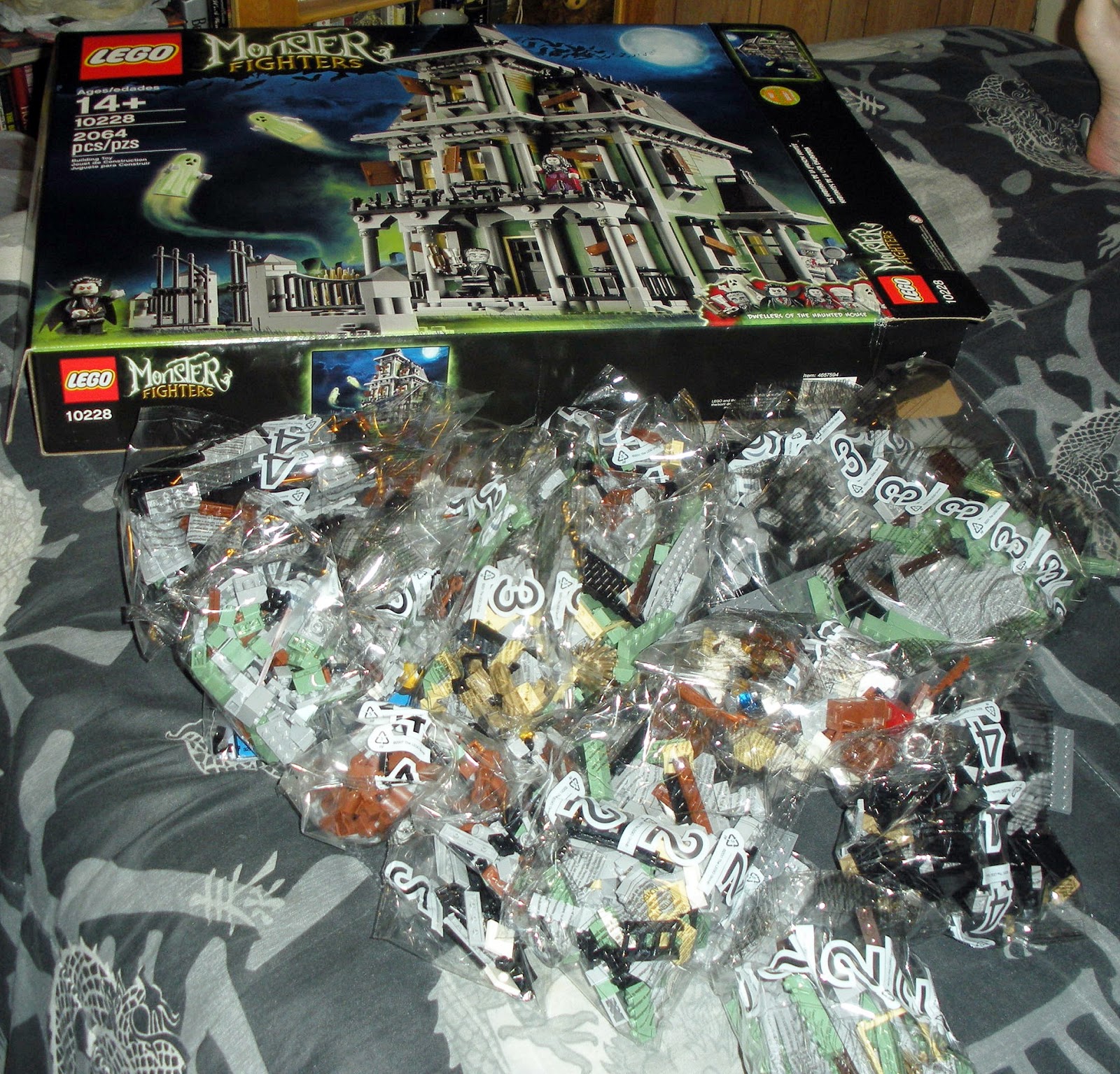 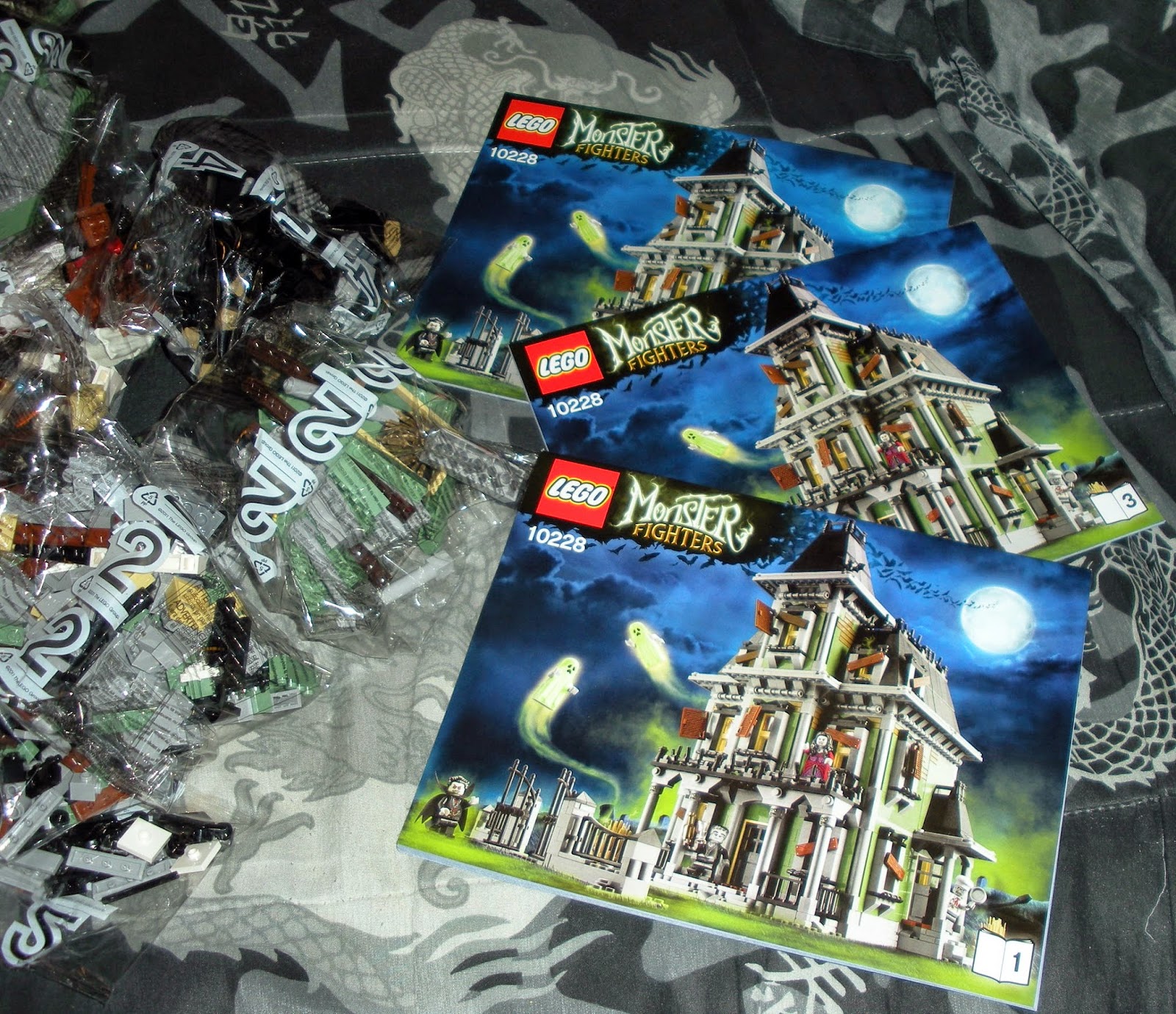 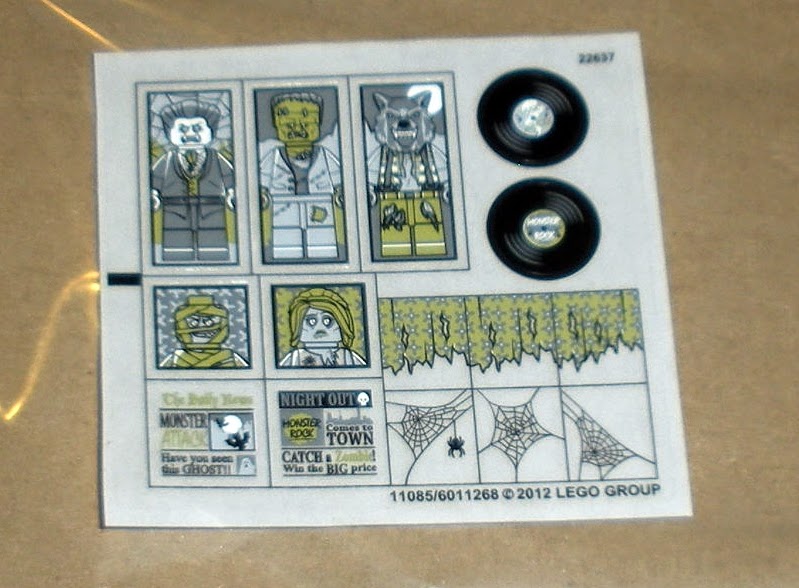 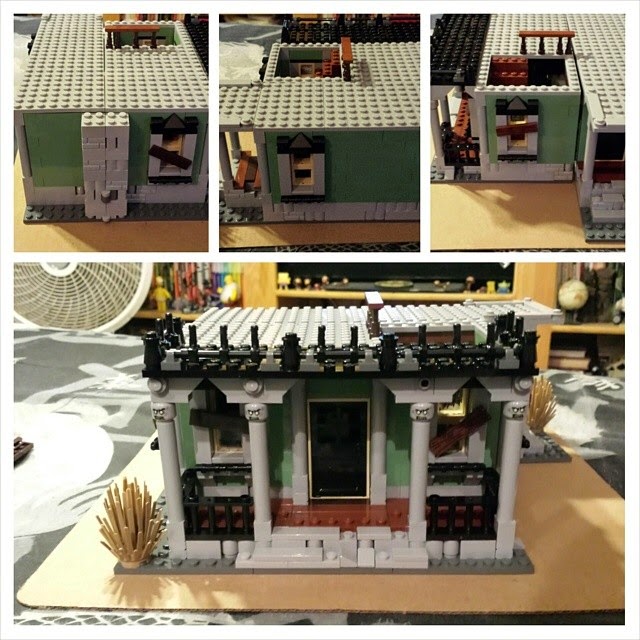 Some interior rooms. Note the ship in the bottle. 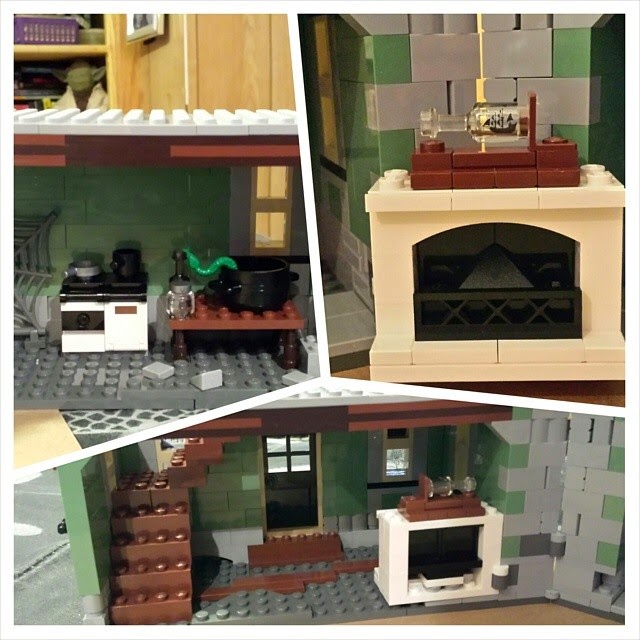 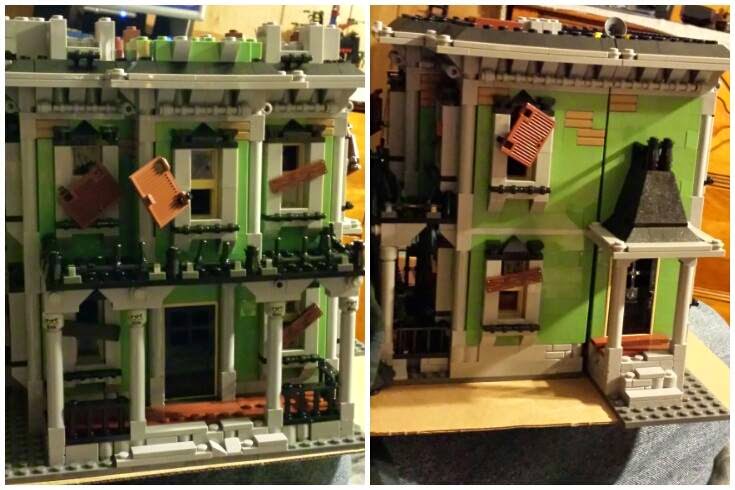 Completed! A couple of days later, I modified the top so that it can spin, based on a suggestion I saw somewhere on the web. I had actually been looking for ideas for a weathervane, but came across that and liked the idea. 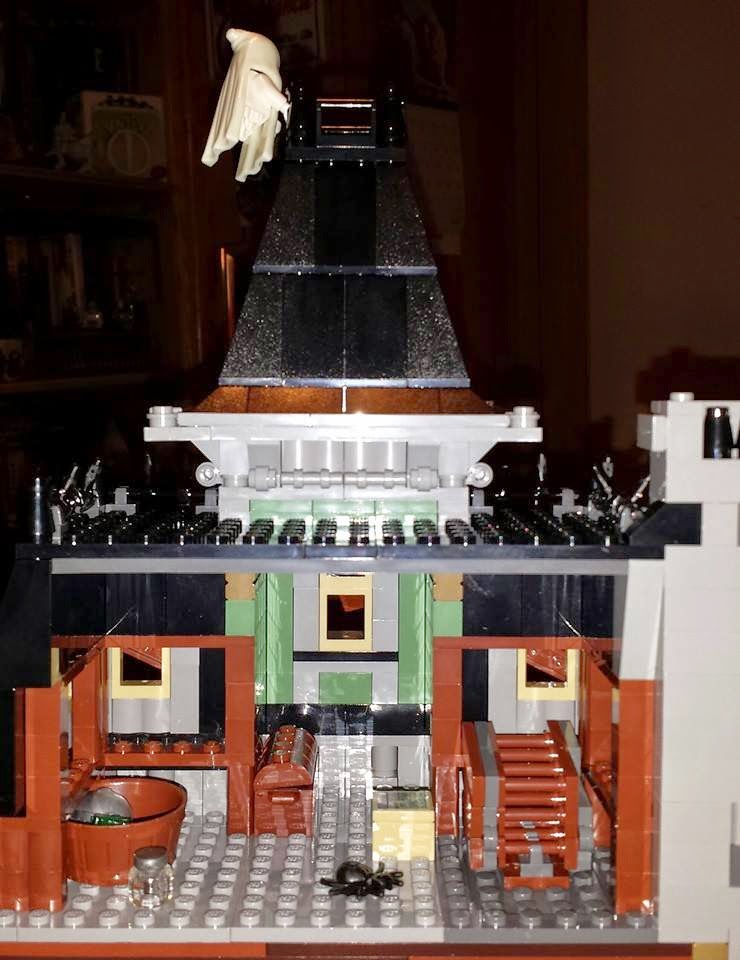 One side of the attic. I friggin' love that it has a Victrola! 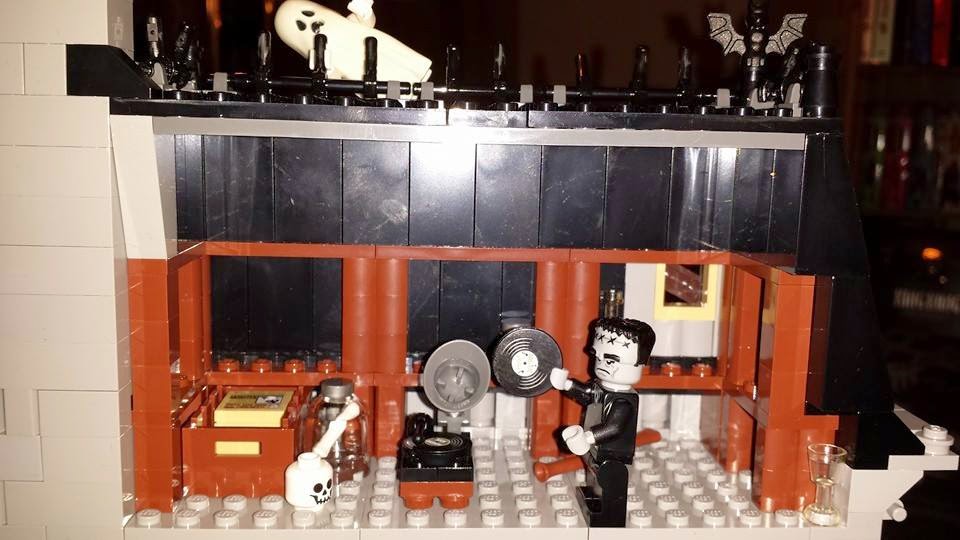 Yeah, it's a pretty nice house, but can it really be called a home with no coffins? (Note the mid-day snack in the jar next to the bed.) 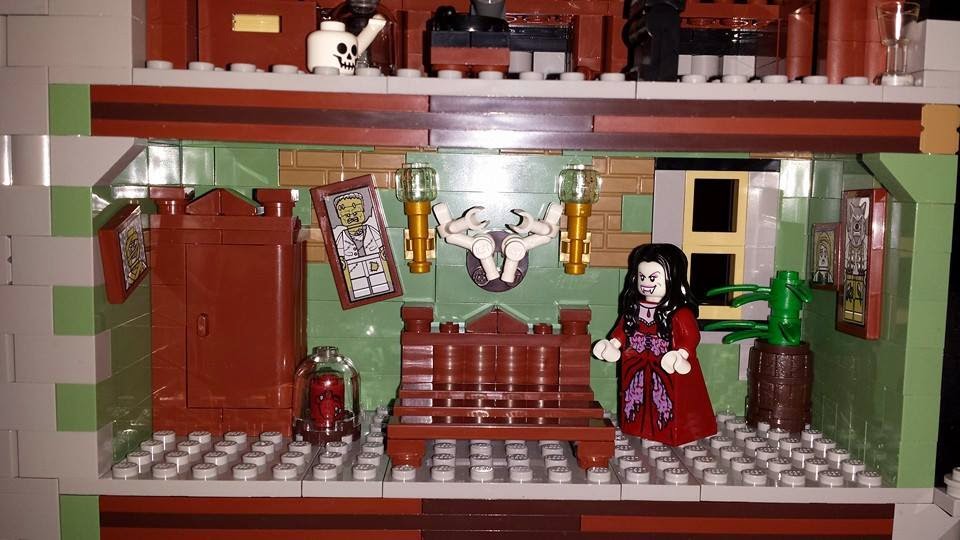 Make sure you squeeze all the flavor out of that spice serpent! (The organ is an original creation I whipped up a few weeks earlier.) 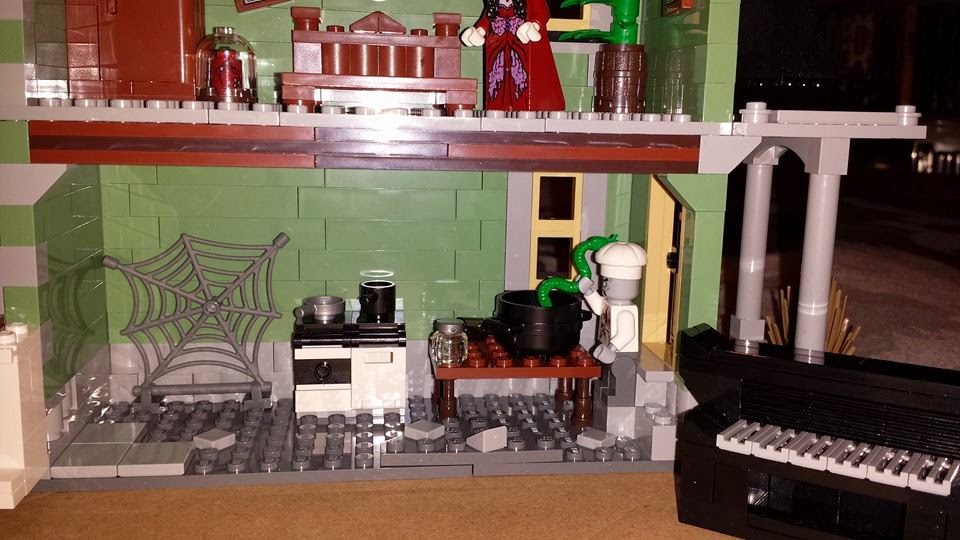 The entry room and staircase. 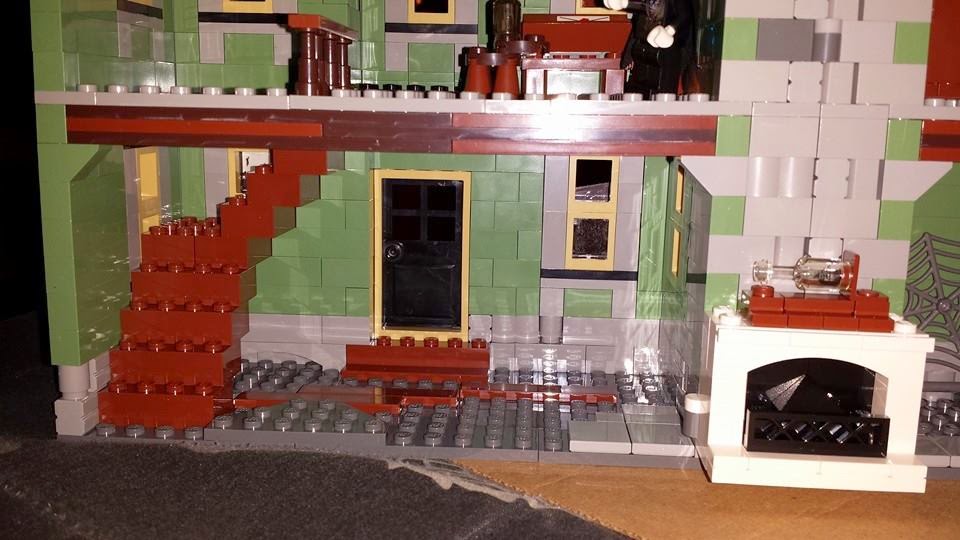 A little office area, complete with desk and stationary! 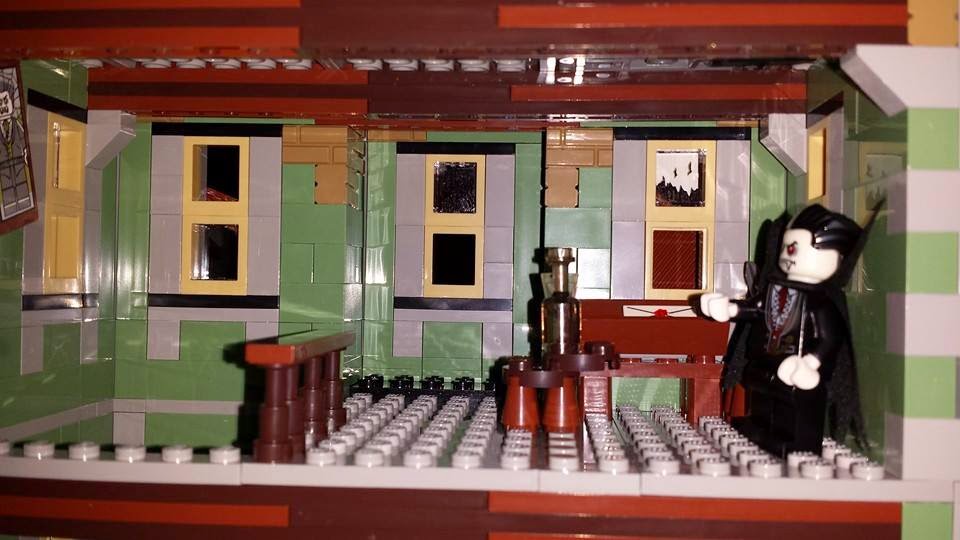 "Here's a little number I tossed off recently in the Caribbean..." 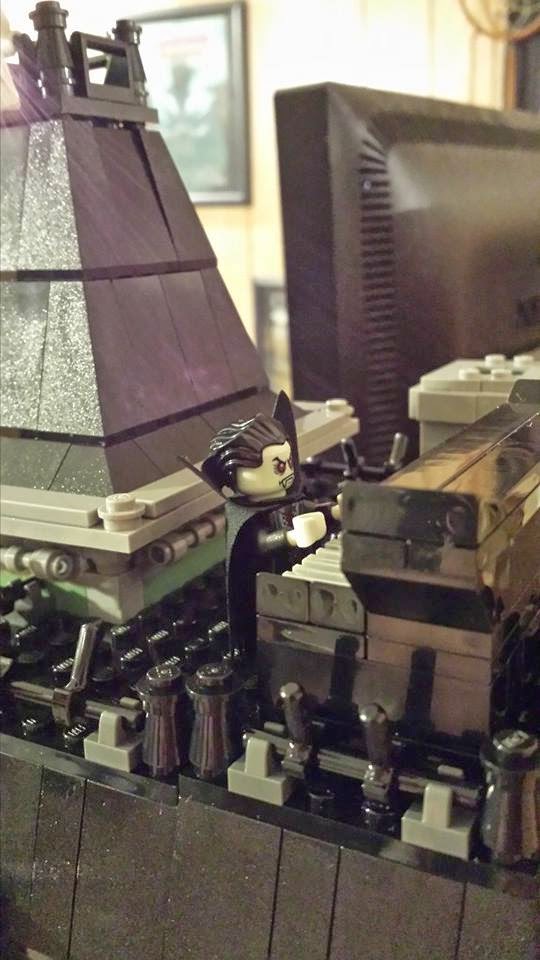 Here's the hearse. As a potential future project, I want to build a garage for it in a matching style. 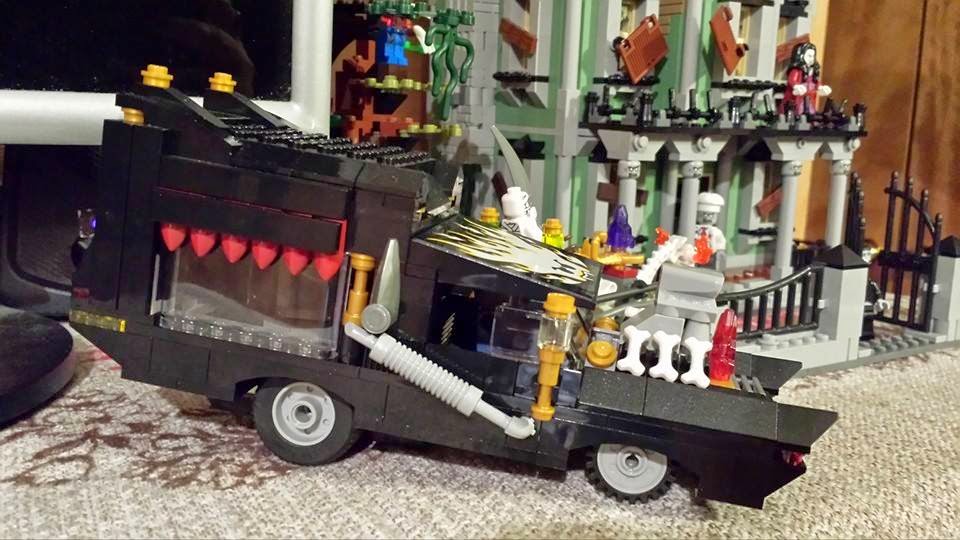 Brick-Ho-Tep swings by for a visit. 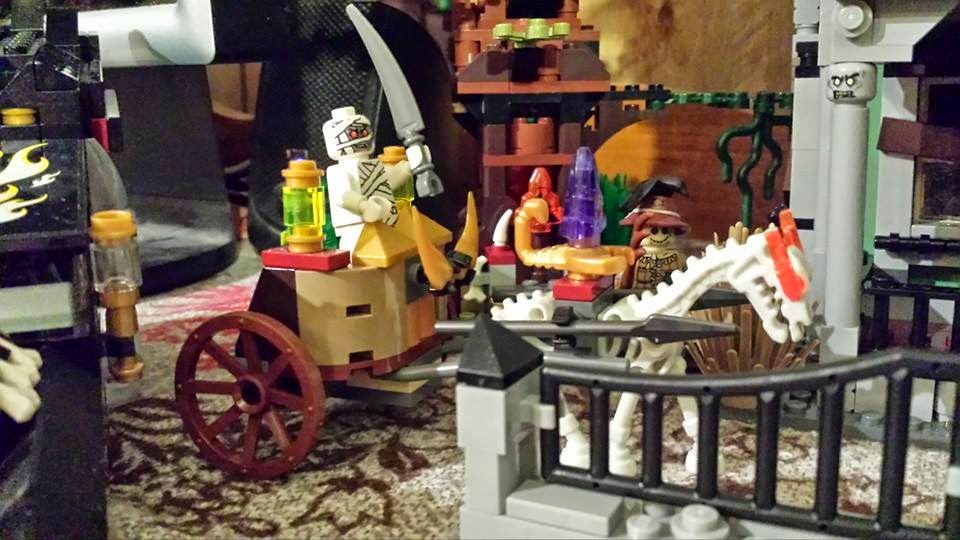 Gill Man and Scarecrow hanging out next to the tree, in which dwells... 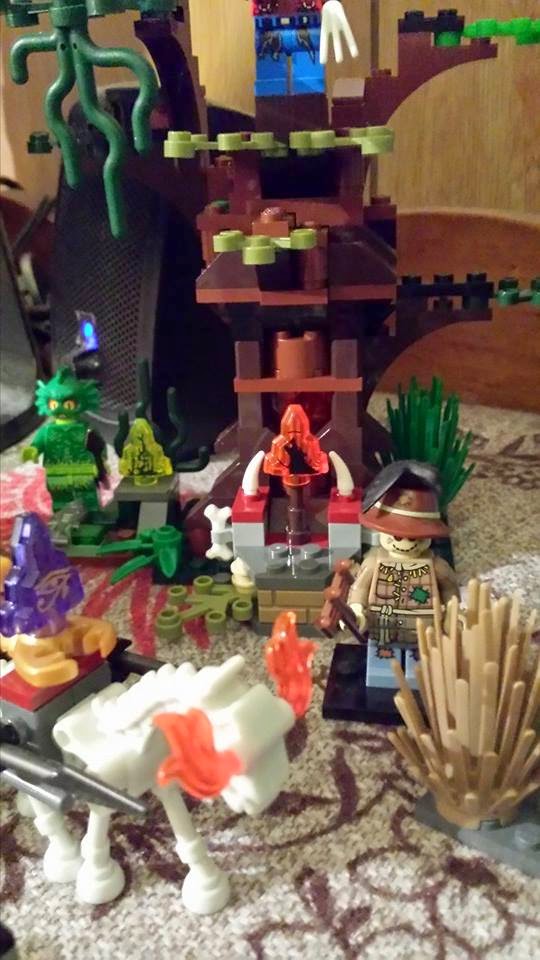 ... the Wolf Man! The tree is significantly modified from its normal version, and I'll mod it further as I acquire more branch and "leaf" pieces. 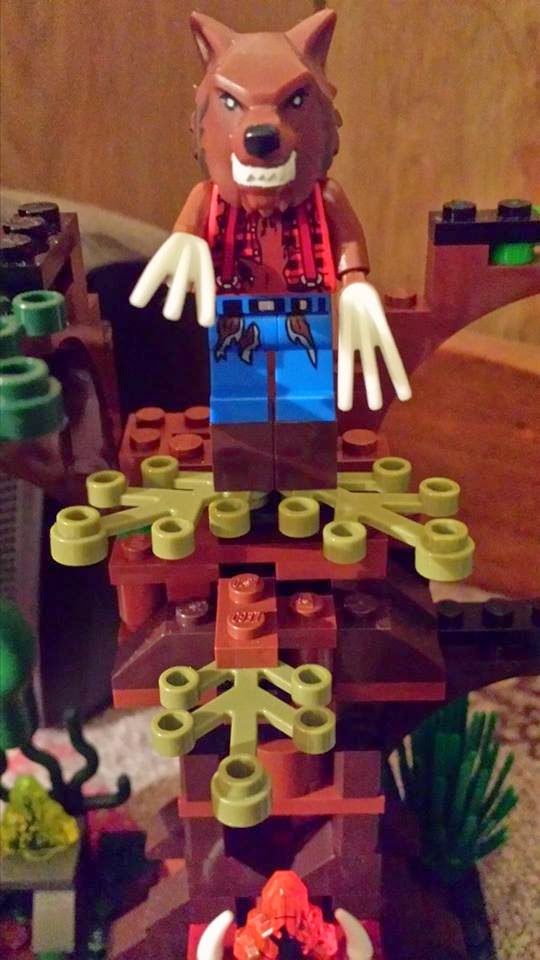 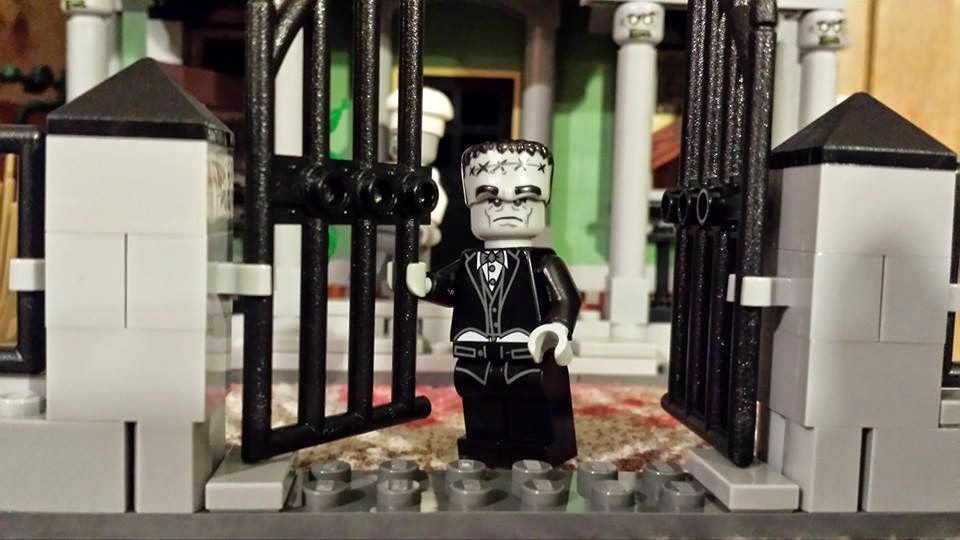 Cindy was sold as soon as she saw that it had this widow's walk! Love the zombie faces carved into the columns. 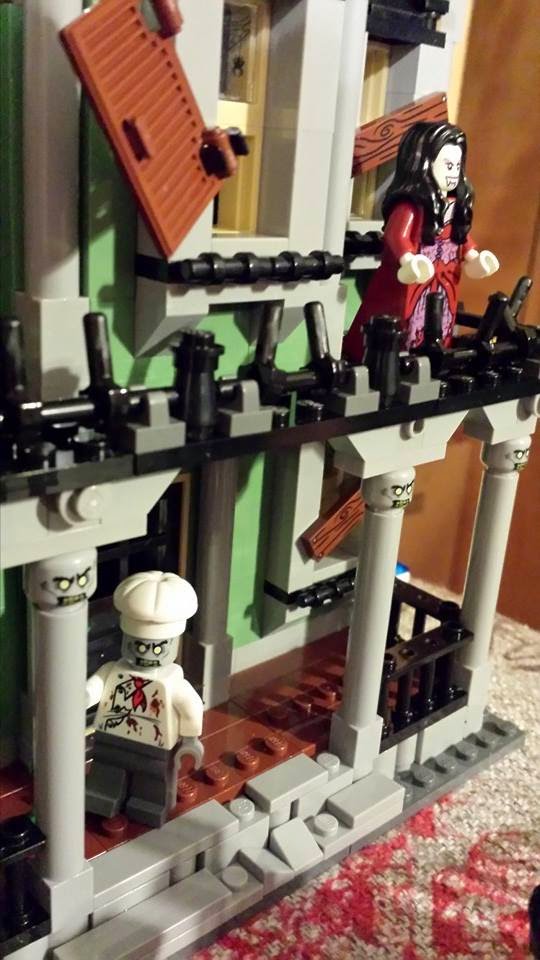 Full shot of the house, with Man-Bat stopping by to hang out. 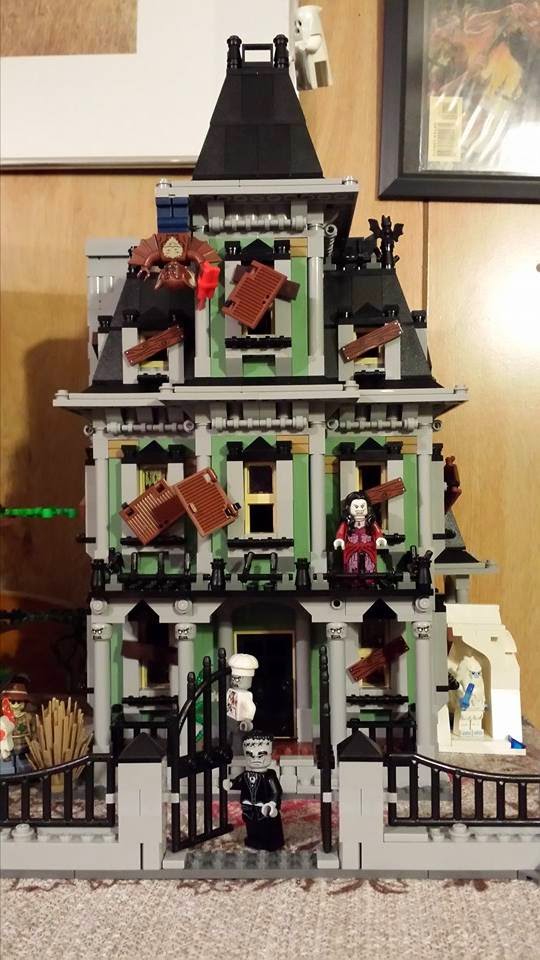 Yeti in the ice cave I whipped up for him. If you look closely, you may be able to see the dismembered Lego body parts he's been snacking on in the cave behind him. 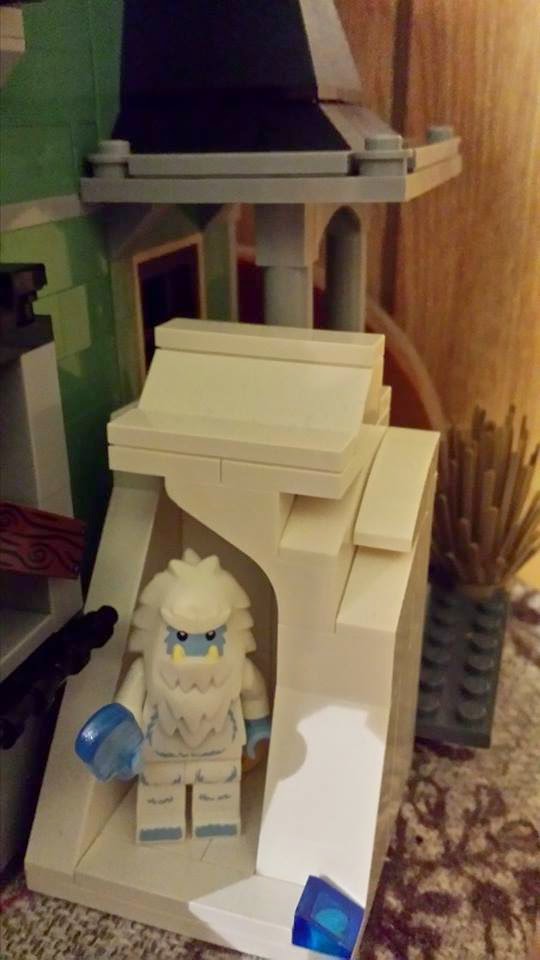 The spire, post-modding. It's pretty cool to spin it and watch the ghosts swirl around the witch. 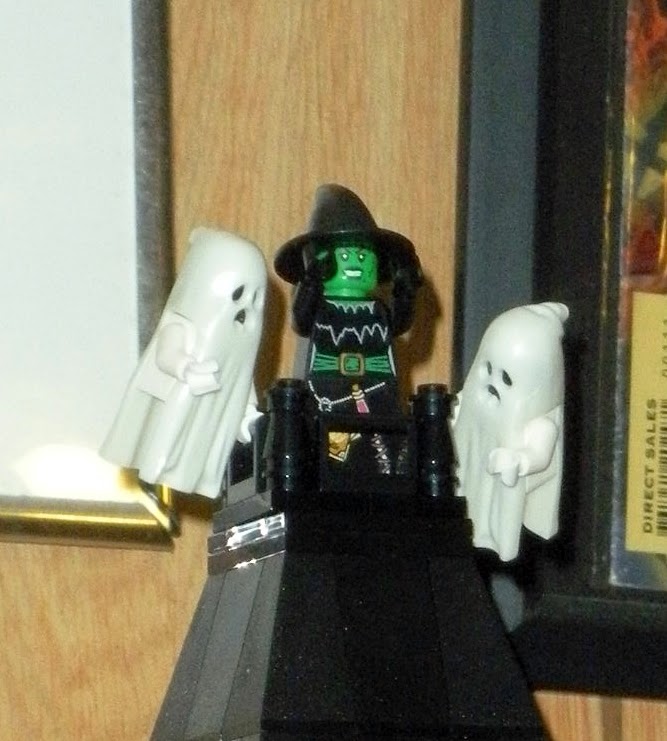 The mad scientist hanging out by the porch, possibly drinking a urine sample. 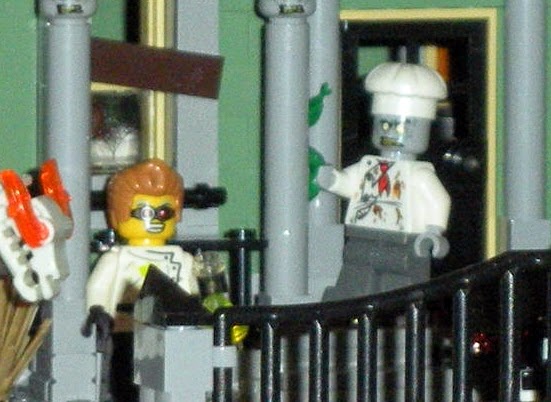 Full shot, with all minifgs added. 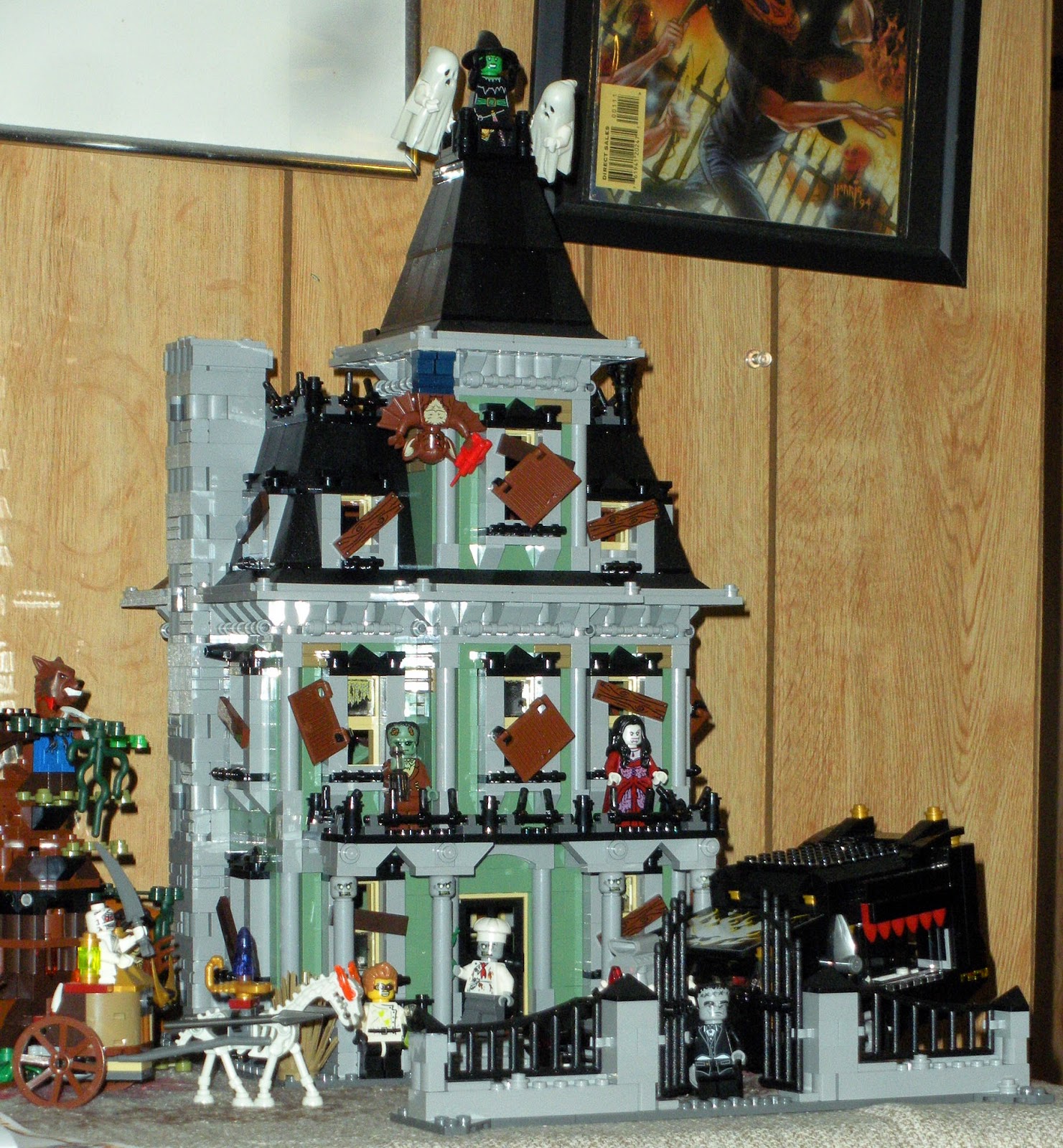 These are the minifigs that actually came with the house(there were two ghosts). Cindy is holding them; my nails are not that fabulous. 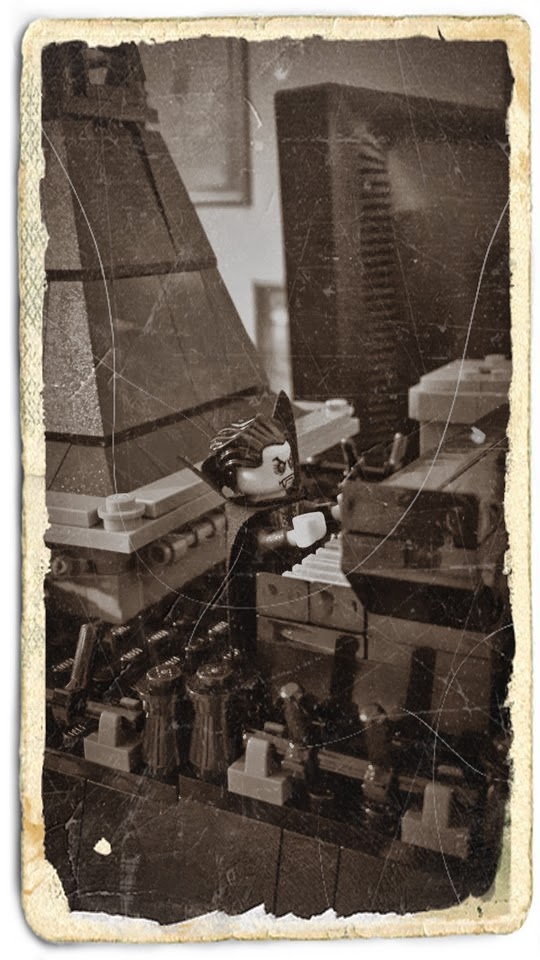 I can say without a shred of doubt that, of all the Lego sets I've lusted after over the years, this one is my favorite. I'm very glad that I got back into the Lego addiction in time to get it before it's discontinued and the price skyrockets. (Seriously, if you wanna invest some money with no risk, buy some of these. They'll be going for 2 or 3 times the retail price in a couple of years. Lego sets are never worth less than you pay for them, provided you get them at or below retail.)

The Haunted House occupies a place of honor in the house, and will be the centerpiece of my Halloween decorations in the years to come. I'd still like to get the castle that is part of the Monster Fighters line, but if and when I do, it won't displace the Haunted House. This thing is simply amazing. 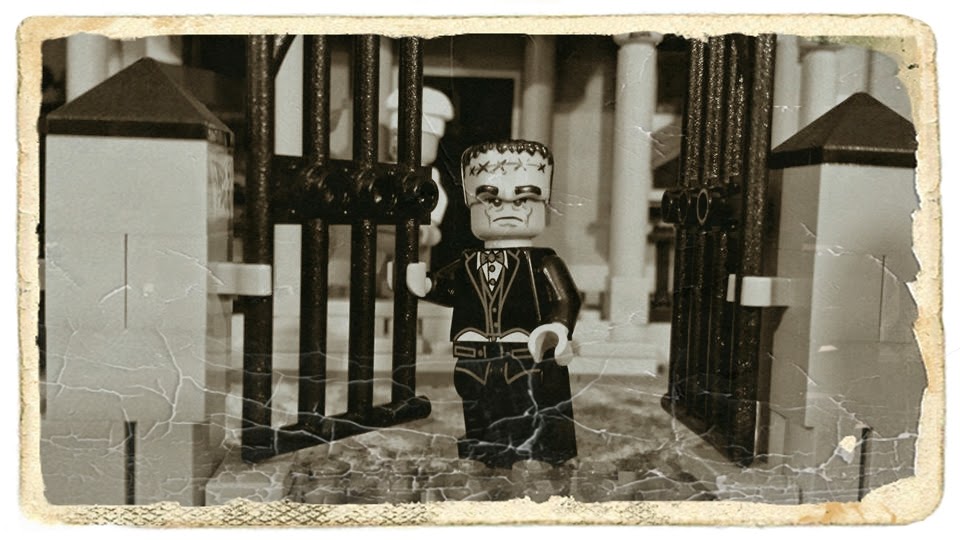