Despite my partaking of trashy men's adventure novels here and there from my pre-teen years to the present day, I had never heard of the Penetrator series. This grievous oversight was rectified when I came across a few of the novels in a thrift store a little over a week ago, scoring them for one thin dime each! Once I saw them, there was no way I was leaving without them, and now my interest in the genre has been reawakened. A few minutes of research revealed that the Penetrator series was written by two authors, both of whom used the "Lionel Derrick" pseudonym: Mark K. Roberts, who penned the odd-numbered volumes, and Chet Cunningham, who wrote the even-numbered volumes. It seems that the series was quite popular, running for 53 volumes, and selling millions of copies. It's always interesting to me how something so popular can be so utterly forgotten just a couple of decades later. Thankfully, the series' large print run and its lack of popularity mean that I shouldn't have too much trouble getting my hands on the rest of the series. 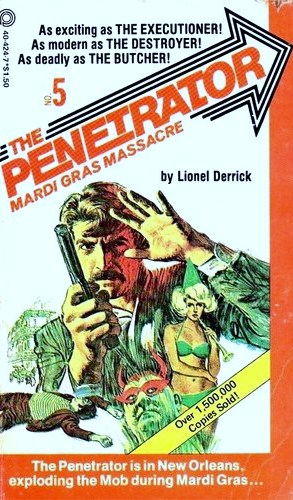 As an odd-numbered installment, Mardi Gras Massacre is the work of Mark K. Roberts. Mark Hardin (no, I did not type an "i" instead of an "o" by mistake, that's really his name) is the Penetrator, a Vietnam veteran (virtually a requirement for protagonists in the men's adventure genre) who resolved to wage war on the criminal element after his fiancee was killed. For new readers, the basic concept and the Penetrator's previous adventures are helpfully summarized at the beginning of the book.

This volume sees Mark travel to New Orleans after a fisherman sends him a letter asserting that he is being paid with counterfeit bills. The money's phony nature  is virtually impossible to detect, and the culprits are distributing it in cahoots with Cuba to destroy the US economy. The man is dead when Mark arrives, but he meets his daughter, a lovely young lady who has an uncanny resemblance to Mark's dead fiancee. She leads him to a family who is sympathetic to their plight, leading to many, many action scenes and whole hell of a lot of murder and mayhem. As with most novels in this genre, the plot is entirely incidental, and exists only to provide plenty of opportunity for bloodshed.

There are some great moments in this book, from a kid who imitates Grady from "Sanford and Son," which is made even funnier since the combat-obsessed Penetrator has NO IDEA what the kid is referring to, to some truly great (bad) dialogue that flows steadily from the first few pages to the end. My favorite, delivered by a thug who follows Mark into a dark alley: "Darker'n the inside of a turd in here." You won't find lines like that in a Jane Austen book! There's also a scene in which Mark, delirious from a penicillin overdose, has sex with his new female pal, convinced that she is his dead fiancee. Happily, the woman doesn't mind, so thrilled is she to be with Mark! I can only conclude from this that Roberts never spoke to a woman his entire life, since I cannot conceive of any circumstances in which a woman would behave that way!

I must mention the great cover art; the artist is uncredited, but it may be the work of George Wilson, a prolific illustrator who seems to have handled at least the bulk of the covers in this series. Dig the pornstache.

This book was a lot of fun, and you can count on seeing more of this series featured here.
Posted by Waylon Piercy at 4:28 PM