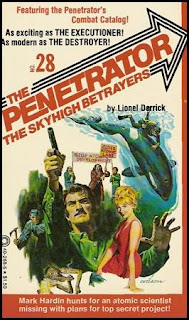 This volume of the Penetrator series is written by Chet Cunningham, who handled the even-numbered volumes in the series. Dr. Brunt Maxwell is some type of scientist working on atomic shielding or something-- look, it doesn't matter, okay? Point is, this dude is missing, and everyone wants to find him, including Mark Hardin, the Penetrator. Most of the book consists of Mark bumbling around, asking everyone in sight if they've seen the guy, and constantly getting into fights. He blows up a carload of thugs with a frag grenade, breaks into a Hispanic woman's house after she's tried to kill him, just taunts her and then inexplicably leaves her alone so she can try to kill him a few more times, burns a guy's house down with a white phosphorous grenade, goes hang-gliding, goes through three or four cars... that still doesn't cover everything. This is certainly a busy book, as Mark never seems to sit still for more than a few seconds; it's ADD writing at its best. If you find yourself bored with whatever penetrating Mark is up to, just turn the page, and he's bound to be waist-deep in something else.

The main villain, who is so inconsequential that I've already forgotten his name, kidnaps Dr. whatsit's wife, and then hilariously announces over the damn radio that she will be gang-raped by five men like clockwork every six hours until the doc turns over his plans for the macguffin. This leads to a genuinely interesting finale in an abandoned funhouse where Mark penetrates the fuck out of a bunch of guys with his bullets. He gets shot in the leg, but it's cool, because he uses some ultra-convenient Indian mental discipline to isolate the pain until he can deal with it at a more convenient time.

I didn't enjoy The Skyhigh Betrayers as much as Mardi Gras Massacre, largely because of the problems with obvious padding mentioned above. Another reason may be the misleading cover art, as we never get to see Mark penetrate the ocean and fight a killer whale, or have an axe fight with an Asian dude, or watch a black guy kick back and smoke a pipe. George Wilson's cover art is honestly cooler than the actual book, unfortunately. Pornstache represent!
Posted by Waylon Piercy at 1:30 PM