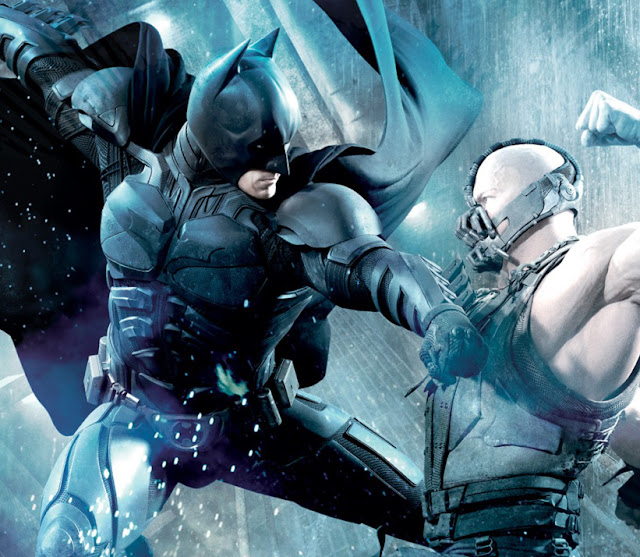 Many of you have surely noticed that I've been curiously quiet (on the blog, definitely not in real life) about the finale to Christopher Nolan's Batman trilogy. I just felt that, with so many blogs and websites already covering every detail that was released, bit by bit, in the months leading up to its release, that job was more than adequately covered. So, I decided to withhold all comments until I had actually seen the movie. Make no mistake, this movie has always been a big deal to me. Batman has been pretty much my favorite thing ever since I was a little kid, and having such a staggeringly good series of films set in his world was about as much as I could have realistically hoped for. After Batman Begins and The Dark Knight somehow surpassed all my expectations, the anticipation for the third film(despite all the hem-hawing around about whether or not Nolan would do a third film, I was always 100% certain that he would) was ridiculously high. Since the moment I staggered out of the theater after watching The Dark Knight for the first time, not a day has gone by that I have not spent at least a few minutes wondering what the third installment would bring to the table. The final week leading up to its release was nearly unbearable. The horrific shooting that occurred during one of the midnight showings cast a weird and tragic pall over the entire affair.

Then, at long last, we were sitting in the theater. As the film began, I had to fight the urge to elbow Cindy and tell her "Hey! We're actually watching it! It's playing right now and we're getting to see it!" This was more than a movie; it was a cultural event.

All that means that The Dark Knight Rises had a whole hell of a lot to live up to. The movie is not perfect, it has a few more flaws than its predecessors, and it's not quite as good as the maniacally awesome The Dark Knight, but it is a wholly satisfying conclusion to the Dark Knight trilogy. I'm not about to summarize the plot here, because that's what pretty much everyone who has reviewed this movie has done, a plot synopsis is pretty damn easy to find. I also don't wanna spoil even the most trivial things for people who haven't seen it yet, and are trying to avoid any and all spoilers. There are a lot of thematic parallels with Batman Begins, so it might be a good idea to re-watch at least that movie before you see TDKR. All you need to understand the film is presented to you, but you'll get more of the subtext by re-watching BB first.

The performances are exceptionally strong across the board. That's no surprise at this point, but it still is worth noting. As the central villain, tom Hardy's Bane is drawing many comparisons to Heath Ledger's Joker. Bane doesn't have the dark charisma that sucks you right into the movie that Ledger's Joker possesses, but Hardy gives a magnetic performance that is just as award-worthy. Watch Hardy's eyes; I made a point of watching them whenever possible, and the way he emotes and conveys so much through his eyes is staggering. combined with the unique, oddly enthralling voice he gives the character, Bane is a villain for the ages, entirely worthy of inclusion in this remarkable film trilogy.

Anne Hathaway's Selina Kyle has been a hotly debated character, but rest assured, she is every bit a fully-realized character worthy to stand alongside her co-stars. The cinematic crimes committed against the character in previous movies have been rectified by Nolan and Hathaway.

As for the returning cast, Christian Bale gets much more development for his character than in TDK, and as always, he makes the most of it. As the film ends, you truly feel that Bruce Wayne's character arc is complete. Michael Caine's Alfred gets some great emotional moments, and may well give you the sensation that dust is suddenly flying around  the room and getting in your eyes in several scenes. Morgan Freeman's Lucius Fox is delightful, as usual, and Gary Oldman's James Gordon remains the staunch ally of the Batman you expect him to be. As the police commissioner, Gordon is burdened by the great lie which has seemingly saved Gotham, at the price of sullying the Batman for all time, as seen at the conclusion of TDK. His conscience wrestles with his knowledge that the lie has been good for Gotham, and Oldman gets some nice moments out of the conflict.

Hans Zimmer's score is phenomenal, as always. the integration of the chanting with the music in key scenes helps to raise the tension in much the same way as the ever-escalating "theme" used for the Joker did in TDK. Along with another longtime Nolan collaborator, cinematographer Wally Pfister, the technical aspects of the film are in excellent hands.

And honestly, that's about all I can say without venturing into spoiler territory. There's a lot to discuss there, so I may well do a spoiler-ific supplement to this before long. To sum up for now, The Dark Knight Rises is the greatest third act any film series has ever gotten, with the possible exception of 1964's Goldfinger. As with all of Nolan's films, it rewards "active" viewing; if you actually use your brain as you watch, you will get so much more out of it. TDKR is a multi-layered feast that I'm already looking forward to seeing again very soon. There has long been a supposed "rule" regarding film adaptations of comic books characters: the third film in the series always sucks. It's been borne out again and again, with film series starring everyone from Superman to Spider-Man. That trend is officially over. The Dark Knight Rises is easily the best movie I've seen this year, and does what many deemed impossible in ending the wildly popular series in a wholly satisfying manner. Go and see it. Then go see it again.
My score: