Five and a half short years after its publication, here are my thoughts on the first volume dedicated to Batman in DC's phone book-sized Showcase Presents reprint series. This is an expanded version of the review I posted on Goodreads. 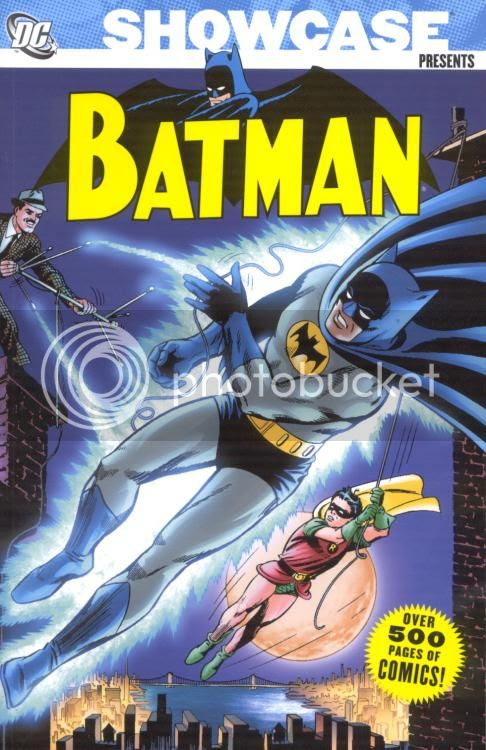 This collection shows a Batman who is in a transitionary phase, slowly leaving behind the goofier elements common to superhero comics of the 1930s-50s. Beginning with the debut of the "new look" Batman in Detective Comics #327, this volume slows a slightly more down-to-earth Batman; gone are the strange transformations and travels to alien worlds. There is still plenty of lovable Silver Age goofiness though, and there is rarely a dull moment. Stories from this era provide a nice balance to the dark, "gritty" Batman that has been common the past few decades. I prefer the darker interpretation myself, but I also enjoy these more light-hearted tales quite a bit.

What is the "new look" Batman, you ask? When DC editorial decided to get rid of the over-the-top fantasy and sci-fi elements and bring the Batman books back to a more grounded level, the shift was personified in a costume tweak for the Caped Crusader; this was the debut of the yellow oval bat symbol we're all familiar with. The art style also changed; instead of a legion of ghost artists delivering art in the house style for Bob Kane to pretend he had drawn, Carmine Infantino started illustrating some of the Batman adventures, beginning with issue #327 of Detective Comics. Longtime Kane ghost artist Sheldon Moldoff (who tragically passed away a week ago) altered his art style to better fit the more realistic stories, and the overall look of the books improved a great deal, in my not-so-humble opinion.(It shows just how versatile Moldoff was that he shifted his art to such a large degree practically overnight, without missing a beat!)

To be sure, these stories still contain quite a bit of goofiness and ham-fisted narration and dialogue, but it was a drastic change from what had gone before, and a big step in the right direction. There was even a long-running story featuring the mysterious Outsider that unfolded over the course of a couple of years, which was highly unusual for the time. Things were going quite well in the Batman books, and then a certain TV show debuted... but that's something to discuss another time.

Bottom line: if you enjoy the inspired goofiness that pops up frequently in Silver Age comics, you'll enjoy this book. If you're a fan of the animated Batman: The Brave and the Bold TV series, this book is right up your alley.
My score:

Check this book out, fool!
Posted by Waylon Piercy at 11:30 AM