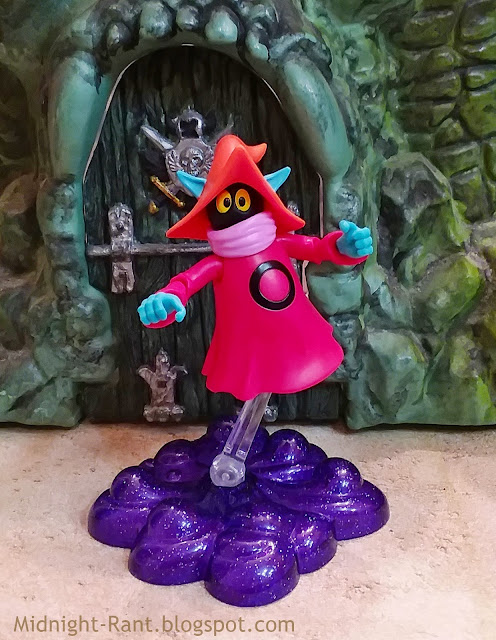 Today we're looking at the newest plastic incarnation of one of the most polarizing of all MOTU characters, Orko! Loved and loathed in seemingly equal measure by the MOTU fandom, Orko is nevertheless a fixture in the mythos, so it's not at all surprising to see him recieving a figure so early in the Origins line. Personally, I hated Orko when I was a kid. I always disliked the so-called "child identification" characters because it felt like I was being pandered to, and really, that's exactly the idea behind those characters. In my mind, Orko was the worst offender of them all, because he was plopped smack dab in the middle of my beloved MOTU. By the time he made the scene in the Filmation cartoon, I was already way into the more hard-edged world seen in the early minicomics. Orko was emblematic of the shift into a blander, more toddler-friendly version of MOTU that I didn't like nearly as much. While I enjoyed the animated show well enough for what it was, it was never the "real" MOTU to me, and Orko was a big part of why I felt that way. The vintage figure suffered countless tortures at the hands of Skeletor, culminating in his murder for "being a tosser," at which point he was buried in the front yard. As far as I know, he's still down there! (Side note about the "tosser" thing: I picked that up somewhere, doubtless from a movie or something, and just liked the sound of it. My Mom either found out what it meant, or just decided it was likely something her five-year-old didn't need to be saying, and promptly put a stop to my useage of it. For a little while, however, it was my insult of choice!) My feelings about Orko have softened over the years, but he remains far from one of my favorites. So, was buying this figure just a huge brain fart on my part, or what? Read on... 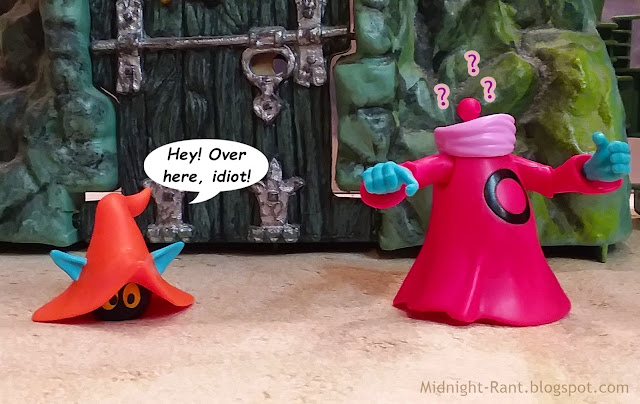 Where the Origins figures have mostly emulated the vintage figures, Orko is a big departure from that approach. He's based entirely on the Filmation design, and looks as if he floated right off the TV screen! While I don't consider the Filmation designs preferable to the figures or minicomic designs, they are the ones who created this character, so deferring to their design was definitely the right approach here. Orko still features a level of detail on par with the rest of the line, with wrinkles and such sculpted where the design allows, chiefly on his scarf and the back of his hat. The sculpting of the eyes is just about perfect. This is a crucial element of the character's design, yet it is something nearly every figure of the character has struggled to get right. Scale continues to be an issue with the character, as he his simply too large compared to the rest of the line. This is a persistent issue with the character, as Mattel presumably makes him large enough that he can be sold as a separate figure without being perceived as a poor value. (Only the Classics version was nicely scaled, but he had the advantage of being a con exclusive packaged with an entire extra figure as his "accessory.") 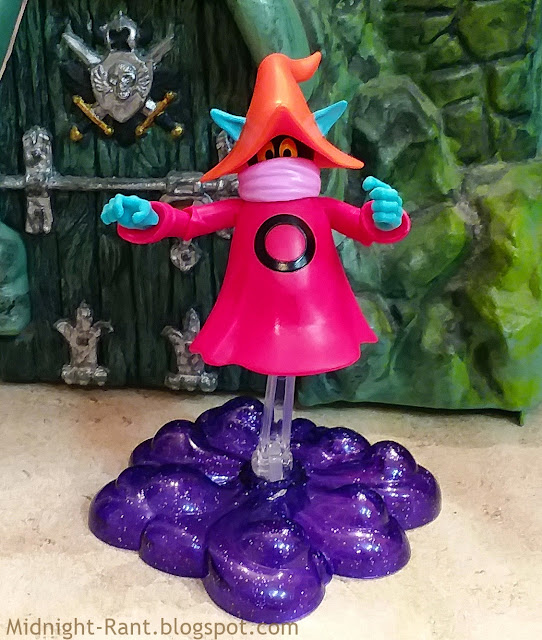 Unlike other wave two figures I've seen, Orko has very neatly applied paint apps. the colors are appropriately bright, and pop nicely on the shelf. I like the bright colors on this line in general, but they seem especially appropriate for this character! Orko's articulation is as close to the line's standard as his design allows, with a ball-jointed head and swivel & hinge shoulders, elbows, and wrists. All points of articulation have a wide range of motion and hold poses well, especially the head. Orko's head has a hole that is slightly smaller than that of the other figures. With a bit of heat, however, it can be swapped with the line's other figures, so you can easily create some truly nightmarish mashups! Sadly, Orko's scarf prevents other figures' heads from popping into place atop his body. It's worth pointing out that the figure does feel rather top-heavy. The solid head and had atop a hollow body creates this issue, though it's alleviated by his body's width at the bottom. The figure can feel a little weird in-hand because of the wonky weight distribution, but it doesn't really affect posing. 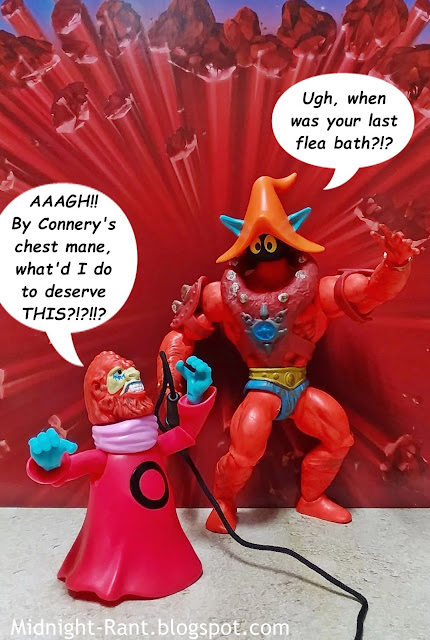 Orko only has one accessory, but it's a big one. His display base is a large glittery purple cloud with a clear stand rising from it. There are two pivot points, allowing for many posing opportunities. the base's width makes it stable enough to support even the most extreme angles without issue. Orko also includes this wave's minicomic, which features him prominently. Despite the base's size, Orko still feels pretty light for a $15 figure. The inclusion of his wand (which was added in the 2002 line, I know) or some alternate hands would have gone a long way toward sweetening the deal here. As it is, it feels like you're paying a few dollars too much for him compared to the other figures. 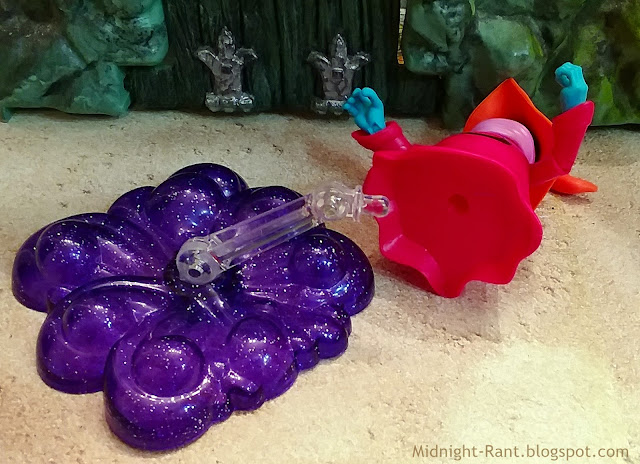 While the individual merits of Origins figures to their vintage versions continue to be heavily debated,  Orko is easily the biggest improvement over his vintage counterpart that we've seen in this line to date. There are aspects of some of the vintage figures I prefer to the Origins versions here and there, but Orko is a grand slam all the way. The one big issue is his scale, but even that is better than it was with the vintage version. Unless you can lay hands on the Classics Orko, scale issues are simply something that have to be accepted with this character. I'm someone who doesn't even like Orko much, and I debated whether or not to get the figure, as I usually skip him. (The only other Orko I currently own is the 2002 figure, which is in storage as I type this.) I'm glad I got him, though. While he'll never be a favorite character of mine, he's a wonderfully designed figure. While taking photos for this review, I was surprised at how photogenic he is, and how much fun I had putting him in various poses. If you flat-out loathe the character, this figure won't change your mind, but if you're on the fence about this figure, go ahead and get it. Orko is one of the unmitigated triumphs of the Origins line to date. That's all for today, but scroll down for more photos, and be sure to float back over this way next week for the next review! Until then, happy hunting, and stay safe out there! 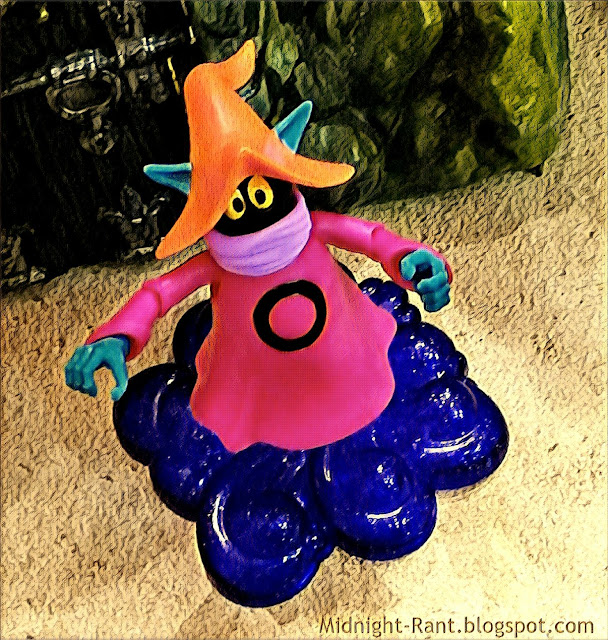 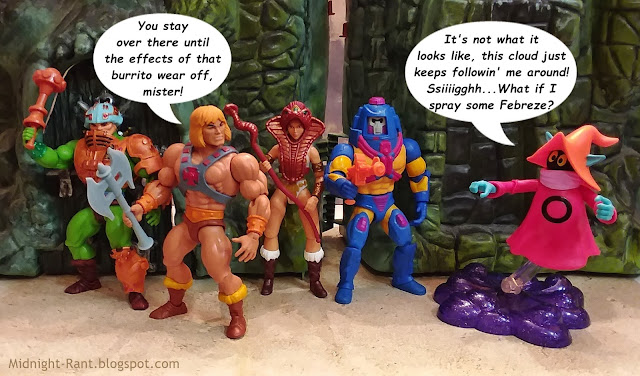 Posted by Waylon Piercy at 1:22 PM