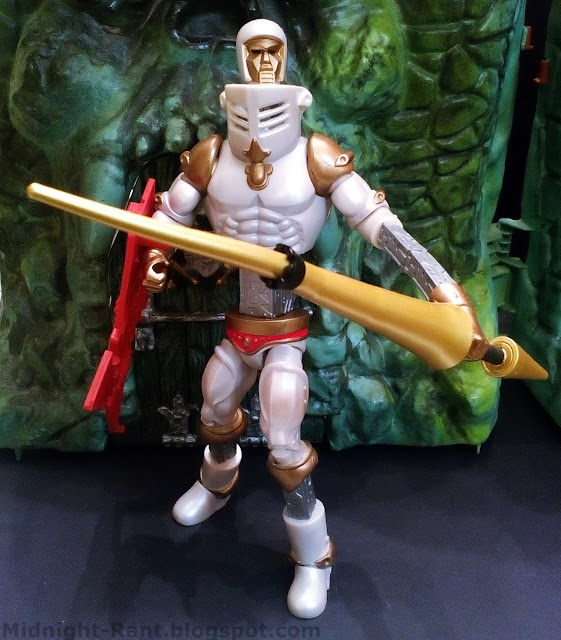 Today we're looking at the white knight of the MOTU mythos, the heroic master of extension, Extendar! Because, y'know, He-Man needs somebody to get his frisbee off the roof whenever it lands up there. Extendar is a figure that instantly appealed to me when I was a kid. In my mind, taller equaled more powerful, as it did for many kids, so the idea that an already cool-looking knight could actually grow larger seemed pretty awesome. It was like a non-crappy version of those "giant growth" sponges our grandmas were always getting us at the dollar store! Of course, given the realities of toy production, there were some limitations to exactly how much Extendar could grow. In the end, he didn't get all that much taller than a standard MOTU figure, but he still had some impressive size and bulk, so it was still pretty cool. 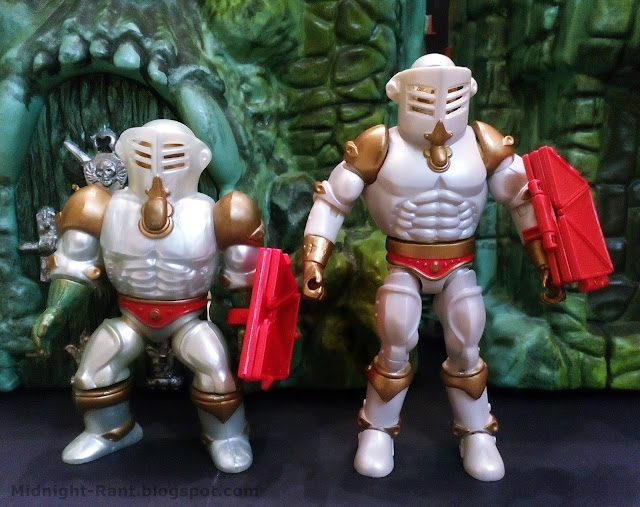 Helping matters was a nice origin story provided in his included minicomic. Feeling inadequate next to the powerful and renowned heroes of Eternia, the oddly already-named-Extendar-even-though-he-has-no-extending-powers-yet Extendar is an easy mark for Hordak's shilling for his "warrior machine." Hordak promises it will make him a mighty warrior, and Extendar, apparently terminally stupid, decides to trust Hordak and go along with him to his lair. Hordak has already transformed an ordinary schlub into the cybernetic terror Dragstor, who lurks nearby as Hordak straps Extendar into the machine. The machine does indeed imbue Extendar with power, and using a nice little motivational rhyme Hordak teaches him, he is able to extend his limbs and become very strong. After He-Man shows up and convinces longshanks to do a face turn, Hordak sics Dragstor on them, and Extendar takes him out pretty easily. He-Man, realizing that his day won't be complete unless he smashes something, destroys the machine before they leave. (Some alternate versions of Extendar's origin have him and Dragstor as friends prior to their enhancements at the hands of Hordak, a nice little additional layer to the story. The MOTUC bio references this version.) An interesting tidbit about this minicomic is that in my copy of it, Extendar's name looks a bit odd every time it appears, as if another name was originally there and hastily replaced. (This famously happened with Lodar's name in the Slave City minicomic.) Interestingly, the version you can read over at He-Man.org has different word balloons and captions than my copy does. As I don't have a scanner, these photos of my copy of the comic will have to suffice for illustrating what I'm talking about. It's tougher to notice in the photo, but it's obvious in person. 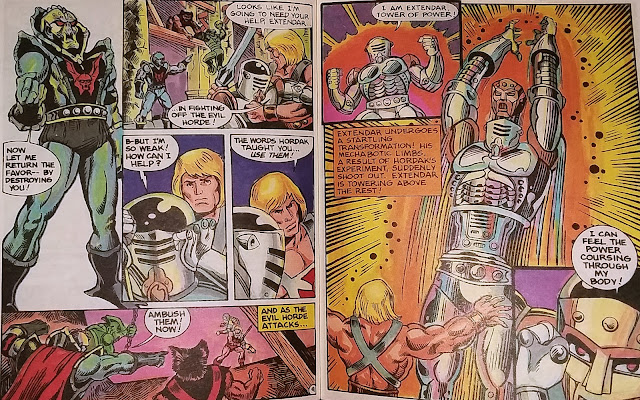 Extendar's sculpt is pretty nice, if a bit underwhelming overall. It's a very good update of the vintage sculpt, and I think that's my issue with it. Figures that were strictly vintage updates, with nothing really added, tend to not thrill me as much as figures like Bow or Trap Jaw, where they really went the extra mile. There is some good detailing in the appropriate areas, particularly on the limb extensions, and they even included the peace sign on the neck. The face still has that odd robotic design with the grate where a mouth should be. The armor overlay is very bulky, even more so than the larger-than-usual torso on the vintage figure, and there is no chance of getting the figure's arms to rest at his sides. That said, his proportions are not as bloated as with the vintage figure, which is nice. There's also the belt, which is sculpted with an oddly large top rim. I'm assuming this was necessary because of the extension feature. It looks a bit odd once you notice it, but it doesn't particularly bother me. Ultimately, there's really nothing exactly wrong with the sculpt, it just wound up not really wowing me. It feels as if Extendar wasn't a favorite of anyone who worked on the figure, preventing him from getting that extra "oomph" that many other figures got in this line. 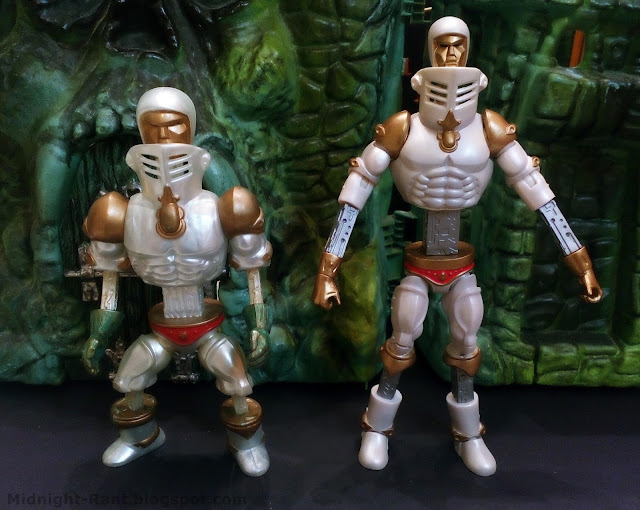 Paint is basic, but neatly applied. The pearl white and gold is every bit as eye-catching and visually appealing as it was back in the '80s. Accessories include a set of six extension pieces, the extending shield, and a lance. The extensions all work well and seems sturdy, though I do wish there were more of them. the shield, like the figure itself, is a well-done update to its vintage counterpart. The lance is a cool bonus, finally giving highpockets an offensive weapon, and one that makes sense with his design and features. Unfortunately, it's warped due to how it was packaged, and the tip tends to droop. 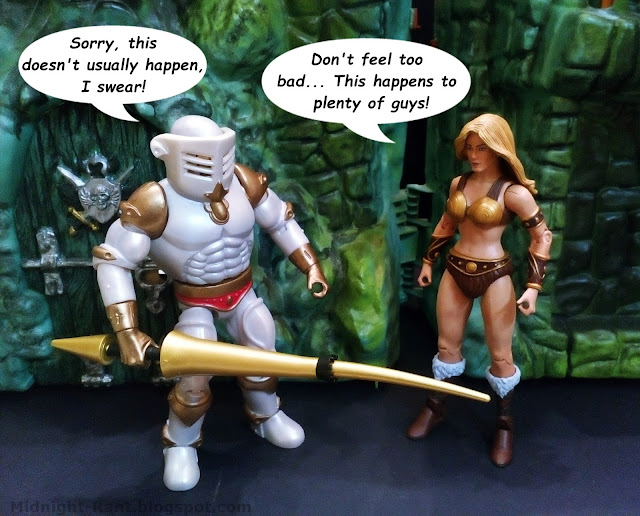 Articulation is kinda all over the place. Extendar has some additional points of articulation due to his extensions, but some POAs don't work very well because of the figure's design. The torso hinge, ankles, shoulders, and hips are severely restricted. On the plus side, the head has a surprisingly good range of motion, especially once extensions are in place. Extendar also has a swivel/hinge joint at each elbow, which is nicely implemented. There is also an additional swivel anywhere you pop on an extension, of course. The joints are all nice and tight, so even with the restrictions, you can get some nice poses. 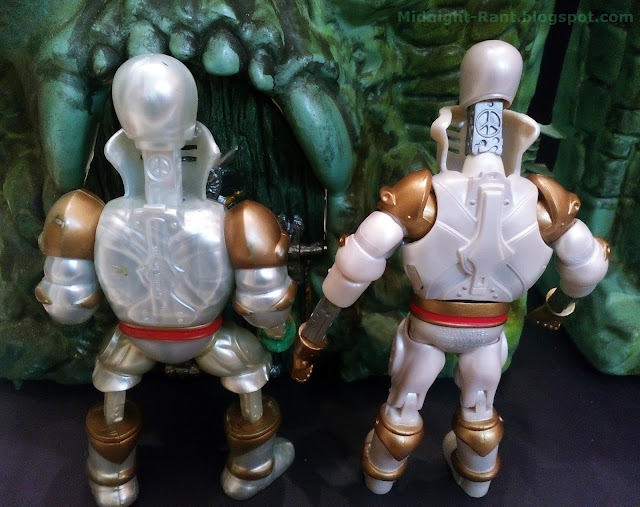 As one of the tail-enders in the vintage line, Extendar isn't one of the more well-liked characters. Even for someone like me who thinks he's cool, his MOTUC figure definitely has some issues. I'm glad to add him to the collection, but there are some things I would personally have preferred be done differently. Still, he's a figure with a striking appearance, a cool gimmick that works pretty well, and he's cheap, to boot! I recommend the figure for anyone who wants to fill out the ranks of their heroic warriors, or even army build a group of heroic knights! That's it for this week, but keep scrolling down for plenty more photos, and see you next time! 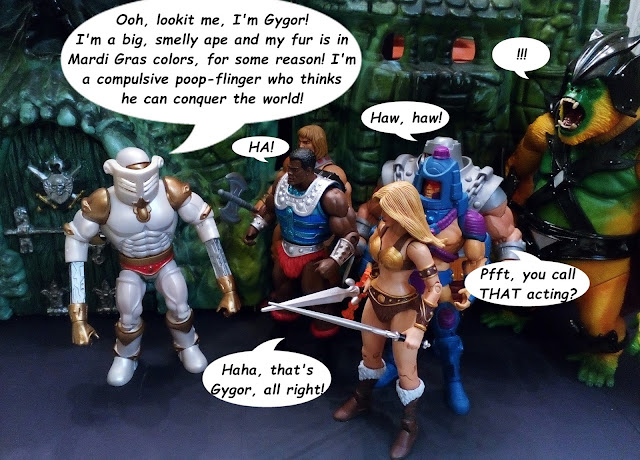 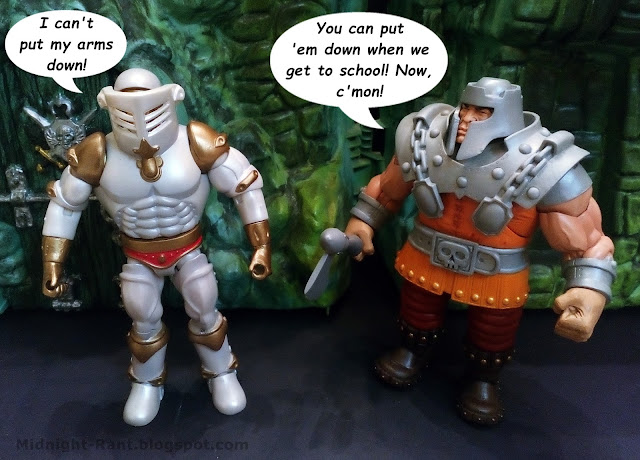 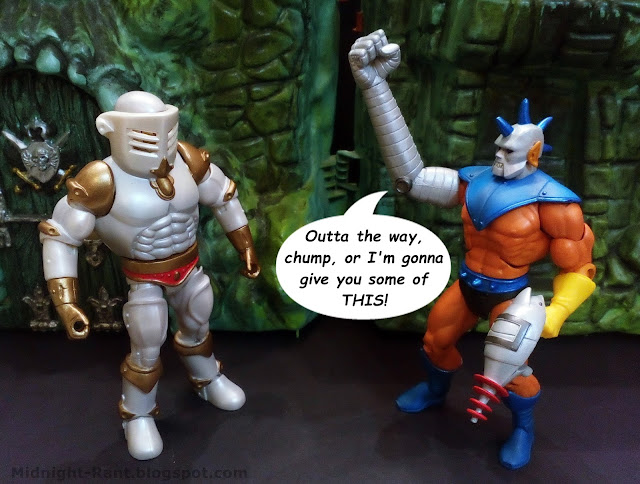 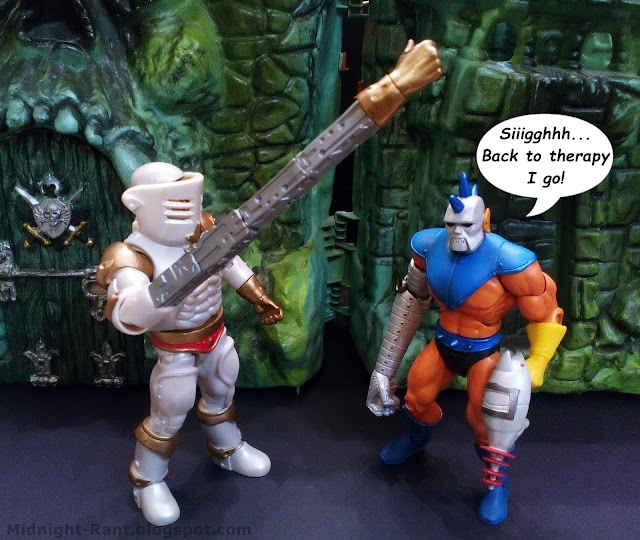