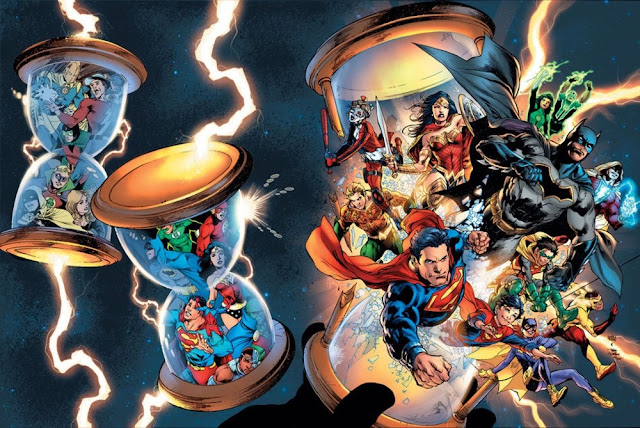 DC Universe Rebirth has finally arrived, following months of heavy anticipation. When the New 52 relaunch kicked off in September of 2011, it was huge success, rocketing dozens of DC books to the top of the sales charts, and largely contributing to a surge in comic sales that has yet to subside. However, much of that sales success proved to be temporary for DC, and in doing a reboot, much was lost. The legacy characters, and the very real sense of a long and fascinating history that they brought to the table, were largely erased. One of the things that made DC's superhero universe so wonderful and unique had been taken away, and readers made their dissatisfaction known.

Now, nearly five years later, the powers that be at DC have admitted that something of value was lost with the New 52 reboot, and are intent on restoring it. We've already seen some steps taken in that direction with series such as Titans Hunt. With DC Universe Rebirth #1, all bets are off, as one of the DCU's most beloved characters returns, and the impending return of many more are teased. The value of legacy is tackled head-on in the narration, as well as characters with long-established relationships that were jettisoned with the New 52. It's clear that Rebirth is equal parts damage control and fan service, even as it sets up a future conflict that promises to be almost torturously exciting. I'm still reeling from the ending. The only way it could have been more shocking is if I had appeared on that page myself! If you've managed to avoid spoilers, do whatever is necessary to remain spoiler-free until you can read it. It's one of the most genuinely shocking revelations in comics history, and I can barely stand the wait to see what comes next! I basically had to avoid all comics-related websites and discussions for the past week, but it was completely worth it.

While Geoff Johns turns in some of the most engaging work of his career, his partners on this comic have brought their A-game, as well. Artists Gary Frank, Ethan Van Sciver, Phil Jimenez, Ivan Reis, Joe & Frank Prado, and Matt Santorelli, with colorists Brad Anderson, Jason Wright, Gabe Eltaeb, and Hi-Fi, make this one of the most gorgeous comics you're likely to find on the stands. It's an eighty page comic, so a lot of hands went into creating it, but the visuals are of such a high standard that they have a consistent feel, and the transition between artists never feels jarring.

So, does DC Universe Rebirth deliver on its massive hype? By Grodd, does it ever! This is one of the most satisfying reading experiences I've had in quite a while, and I really can't remember the last time I was so excited about a comics event. If you have the slightest interest in Rebirth, or superhero comics in general, by all means, pick up a copy. Plus, it's eighty pages for $2.99, so it's quite a lot of content for your money. Feel free to chime in with your thoughts on Rebirth below in the comments! As for me, that ending is about to send me diving into my back issue boxes...you'll know why when you get there!
Posted by Waylon Piercy at 11:00 AM