My review of LEGO Simpsons CMF series 2 will have to wait until I can spare the money to complete my set, but since the official release date is tomorrow, I'll go ahead and post the groping guide to give you a leg up in finding the minifigs you want! First of all, save this image, created using one of the official publicity photos of the series,  to your phone so you'll have easy access to it in the store.* 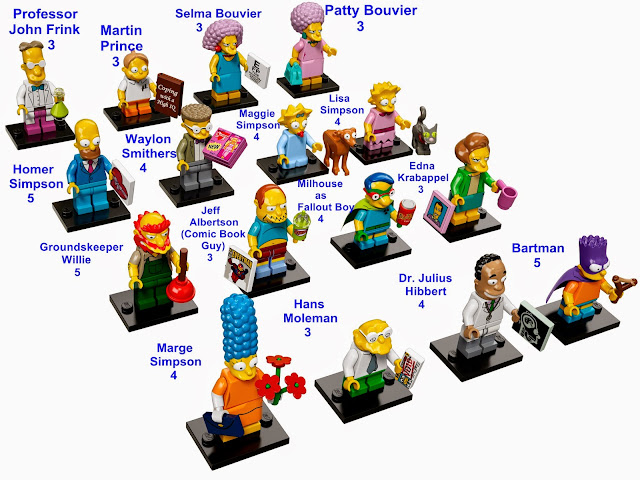 As you can see, it clearly displays each minifig and their accessories, and I've added a number next to each to indicate how many of that minfig are included in each case. With that out of the way, I give you the LEGO Simpsons series 2 CMF groping guide!

Homer: Find the 2x2 tile piece, and make sure there isn't a cup or 2x2 plate to narrow it down to either Homer or Dr. Hibbert. There are several minifigs in this series that include a 2x2 tile, but Homer and Hibbert are the only ones who have this as their sole accessory. (Aside from Selma, but her head is massive and immediately detectable.) Once you've narrowed it down to those two, feel the head very carefully to make sure you have Homer's bald head. Feeling along the back of the head, it's pretty easy to detect Hibbert's lumpy hair, so if the back of the head is smooth, it's Homer.

Marge: As with series 1, Marge's head is impossible to mistake for anyone else. find that, and you'll know right away.

Lisa: With their similar heads and the inclusion of pets, Lisa and Maggie are fairly easy to get confused. Find a normal torso and a pair of child legs to ensure you have Lisa. It is possible to tell Snowball II from Santa's Little Helper, but it can be tricky, so stick to the legs as confirmation.

Maggie: Once you've found the starfish head, find the unique baby body to confirm you have Maggie and not Lisa.

Bartman: Bart's head is pretty easy to detect, but feel for the slingshot as well to confirm.

Fallout Boy/Milhouse: His head can be confused with Moleman's and Martin's pretty easily, and as all of them have the immobile child legs, you'll have to find the cup to confirm that you've got Milhouse.

Jeff Albertson: Comic Book Guy has the 2x2 tile and a Squishee cup. Find both to confirm you've got him.

Martin: Look for his large book. No one else in this set has an accessory like it. It's thicker than the base plate all the figures come with and is smooth on both sides, so make sure you're not confusing another figure's  baseplate for his book.

Professor Frink: Search for the beaker. It's shape is unmistakable.

Hans Moleman: Search for his 1x2 tile. No one else in this set has one.

Selma: You'll know right away when you've picked up one of the Bouvier sisters, as their heads are huge and the hair texture is very obvious, even through the thick foil bag. It's damn near impossible to distinguish between Patty and Selma's heads inside the package, so once you've found one of them, look for the 2x2 tile to verify that it's Selma.

Patty: Same instructions as with Selma, but feel for her purse instead of the tile.

Groundskeeper Willie: Look for the plunger. The red part is a softer rubber, so keep that in mind while groping.

Edna Krabappel: Look for the 2x2 tile and the coffee mug. The mug is distinguishable from CBG's Squishee cup due to the handle on the side.

Waylon Smithers: Search for the 2x2 tile and the 2x2 plate. The plate has four LEGO studs on top, so it's easy to distinguish from the baseplate. No one else has a normal Lego 2x2 plate in this set, so if you find that, you've got yourself a Smithers.

Dr. Hibbert: As with Homer above, find the tile and make sure there are no other accessories, then carefully feel the back of the head to make sure you can feel Hibbert's hair.

Hopefully this will prove useful to all of you. Happy groping!

*Yes, there used to be a different photo. I found it via web search and noted in the original post that the photo was not mine. (As it bore no watermark, I had no idea who cobbled it together.) That photo's "creator" accused me of stealing his work; apparently, my specifically stating that the photo was not mine meant that I clearly wanted to "steal" it. Pay no mind to the fact that it was simply a collage of publicity photos to begin with. Once I knew who had made the collage using the astonishing skill of taking publicity photos and placing them on a white background, I offered to credit him here. Apparently that wasn't good enough, so I just replaced it altogether.
Posted by Waylon Piercy at 4:19 PM

Email ThisBlogThis!Share to TwitterShare to FacebookShare to Pinterest
Labels: LEGO, The Simpsons