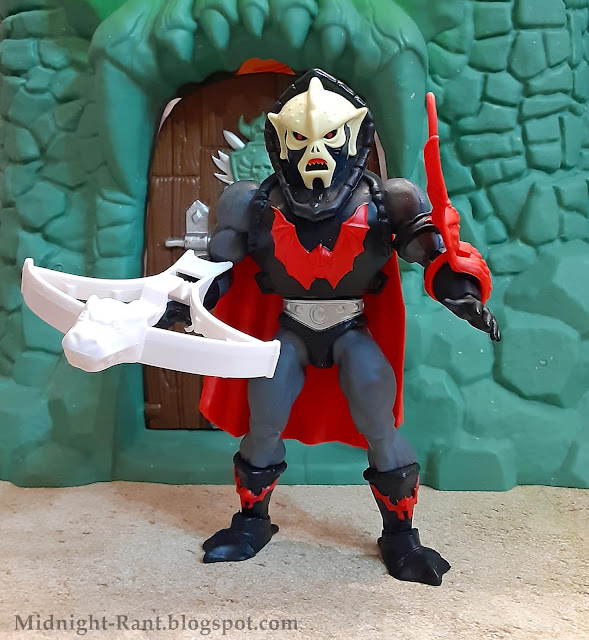 Hordak has often been a somewhat controversial figure among MOTU fans over the years. One of the biggest debates that frequently pops up concerning him is whether or not he is considered a MOTU or She-Ra villain. Proponents of either point of view have a strong case, as he featured as the main antagonist in the Filmation POP cartoon, but the Horde were only released as actual toys as part of the MOTU line, and featured heavily in the various comics that followed their creation. Even his backstory was controversial when he first introduced. Putting aside the clumsy retcon of employing him to steal an infant princess that had never before been mentioned, the very idea of making him Skeletor's mentor rubbed many young MOTU fans the wrong way. Personally, even as a child, I rejected that backstory, as it diminished Skeletor. But despite that, I found Hordak, and the Horde itself, to be pretty cool and interesting. It was a great idea to introduce a third faction that was after the destruction of both Skeletor and He-Man, and the figures themselves boasted some very cool and creepy designs. Thus, while he was never Skeletor's mentor in my mind, Hordak was a worthy villain who featured pretty heavily in my MOTU adventures after I received the figure as an Xmas gift. We've gotten some truly great figures of the Horde's supreme leader (none of that "Horde Prime" stuff for me!) over the decades, so how does this new version stack up? Read on... 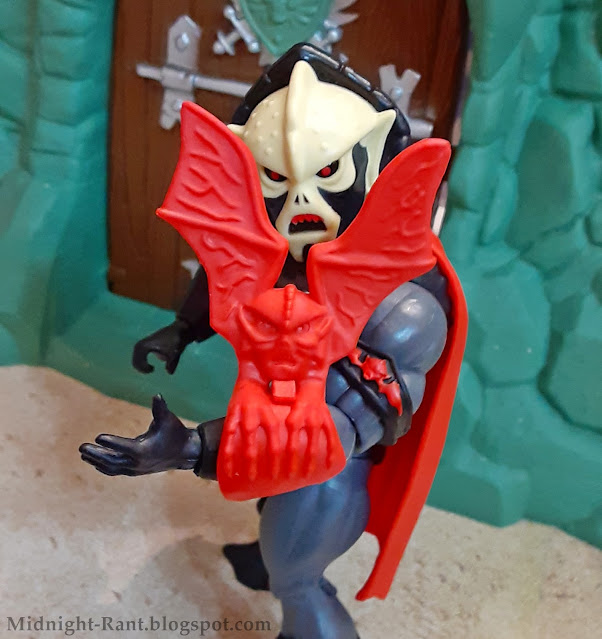 Following the Origins template, Hordak replicates the vintage toy's design, with some minor differences. The most noticeable deviations are the eyes, which are significantly smaller. The chitinous rim of his headpiece and the warts on his head are also more clearly defined, and the points on his forehead ridge are a bit more pronounced. The bulk of the figure uses the standard humanoid body, though his gloves and boots are new. The Horde armband is a separate piece, rather than a sculpted element on the arm. His facial expression seems slightly different, coming off a bit more annoyed or grouchy than the vintage figure's barely contained malevolence. On close examination, however, I think this is more due to the paint apps than the actual sculpt. Speaking of those paint apps, what's here is applied pretty neatly. Even somewhat tricky apps, such as the red bats over black boots and armor, are thick enough that the black does not bleed through. There are more differences from the vintage toy in this category, especially with the eyes and the surrounding area. Whether or not this is a bad thing is a matter of personal opinion, but there are quite a few variants out there, so you can probably find a Hordak head to suit your tastes. The Origins line's tendency to brighten up the color scheme is only partially in effect here. The shades of white and red used on the head, armor, and cape are indeed much brighter, but the shade of gray used for Hordak's skin is far darker than what we've seen before. The "jowls," gray on the vintage toy, are black here. 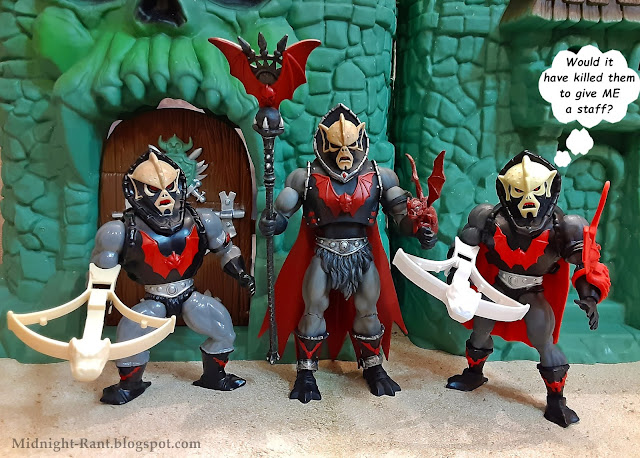 Hordak has the standard articulation, with swivel & hinge shoulders, elbows, wrists, hips, knees, and ankles, swivels at the calves and waist, and a ball-jointed head. The head's range of motion is limited a bit by its design, but it's better than I expected. Hordak's accessories include the aforementioned armor and armband, his bat shield/sidekick, and his crossbow. The bat clips snugly into place on either of his forearms, and the plastic used is a more rubbery kind that seems less likely to cause the band to snap off, an issue that plagued many vintage Hordak figures. The crossbow is a bit trickier to get into proper position, and is prone to fall off the figure's arm. The cape attached to the armor is actual sculpted plastic, rather than the thin sheet of plastic used for the vintage version. It's a soft, rubbery plastic, and that, combined with its short length, prevents it from interfering with posing in any major way. The wave four minicomic is also included. With so many of the figures in this line coming up short on accessories, it's nice to get a figure like this that has a good assortment. A version of the staff from the 2002 and MOTU Classics iterations of the character would have been nice, but there's enough here that I don't feel cheated without it. 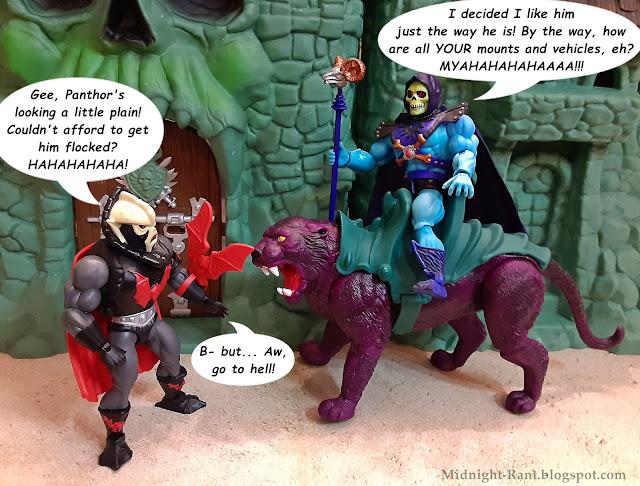 As the leader of one of the main factions, it was vital that Hordak be done properly, and I'm pleased to say that the design team has done it. Hordak's interesting design makes him stand out on the shelf, even all by himself. It'll be even better when we have enough of his cronies in figure form that the Horde can have their own corner of the Origins display! Whatever your feelings about where the Horde belongs on the toy shelf or in MOTU lore, Hordak is a well-made figure, and worthy addition to the collection. Now bring on the rest of the Horde, and some Snake Men! That's it for today, but keep scrolling for more photos, and open a portal back here in three days for more! Until then, stay safe out there, and happy hunting! 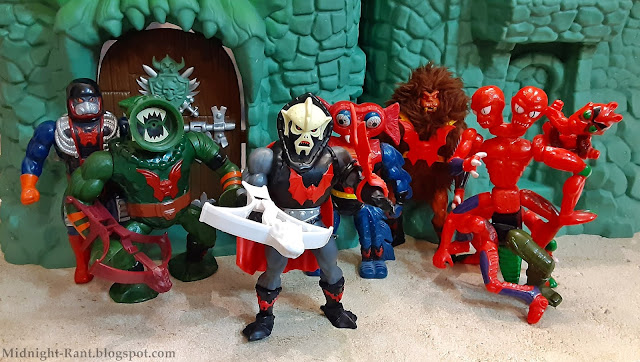 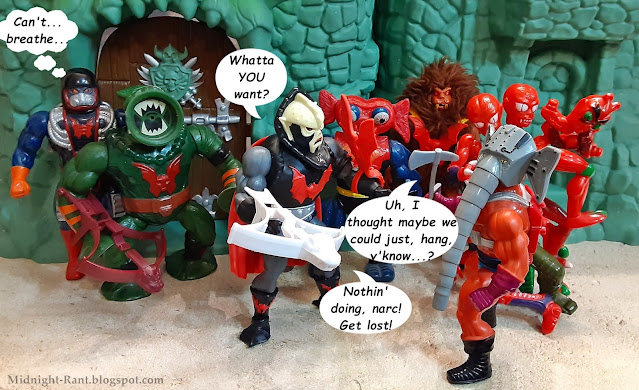 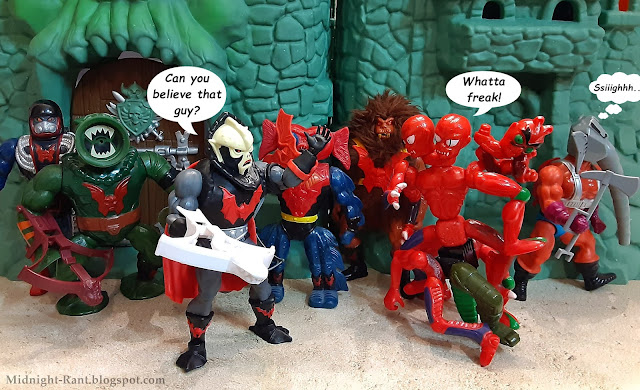